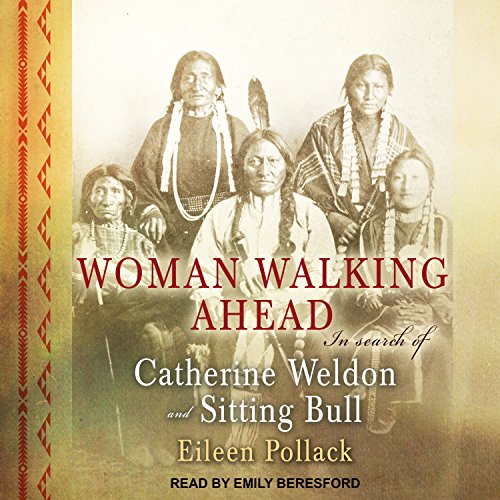 This book restores a little-known advocate of Indian rights to her place in history.

In June 1889 a widowed Brooklyn artist named Catherine Weldon traveled to the Standing Rock Reservation in Dakota Territory to help Sitting Bull hold on to land that the government was trying to wrest from his people. Her efforts were counterproductive; she was ordered to leave the reservation, and the Standing Rock Sioux were bullied into signing away their land. But she returned with her teenage son, settling at Sitting Bull's camp on the Grand River. In recognition of her unusual qualities, Sitting Bull's people called her Toka heya mani win, Woman Walking Ahead.

Predictably, the press vilified Weldon, calling her "Sitting Bull's white squaw" and accusing her of inciting Sitting Bull to join the Ghost Dance religion then sweeping the West. In fact Weldon opposed the movement, arguing that the army would use the Ghost dance as an excuse to jail or kill Sitting Bull. Unfortunately she was right.

Up to now history has distorted and largely overlooked Weldon's story. In retracing Weldon's steps, Eileen Pollack recovers her life and compares her world to our own.

"Pollack shows us that in the Victorian era, Weldon did indeed walk ahead of her time." (Gateway Heritage)

What listeners say about Woman Walking Ahead

Why not just call it fiction and be done with it?

What would have made Woman Walking Ahead better?

A better, more objective investigation into the woman, Catherine Weldon, and a bit more professionalism in the presentation would have gone a long way. I consider myself a liberal, and can reasonably expect a fairly liberal rendering of stories involving native peoples and Euro-Americans. But this, as the saying goes, is beyond the pale.

It's so conjectural, so lacking in anything remotely scholarly in research, it becomes hard to believe anything the author writes. Beyond that, it's infused with the most cynical of guilty liberalism. The author never misses an opportunity, upon meeting a black person, or entering minority communities to pontificate about racial inequity. Rather than praise multi-culturalism, or positive aspects of primarily minority communities in New Jersey and Brooklyn, she stoops to the commentary that it's "the kind of place white supremacists fear". What? Where did that come from?

Similarly, she presumes that a waitress treats her in a surly manner because following her Sundance experience her skin is several shades darker, and her hair is matted down with oil. It's abundantly clear to the author that the waitress believes her to be Lakota and treats her in a racially discriminatory way. The tone-deaf narcissism of the author is astounding.

In Bismarck, she "felt the self-conscious isolation that comes to anyone who is not a light-complected, blond Christian in a city where most people are." I'm no religionist myself, but it's fairly obvious that the author brought her own prejudices into this adventure.

Without a hint of irony, she bemoans the fact that a proposed Hollywood movie of this story will be yet another tale told through the racially insensitive eyes of white people. While that is almost certainly true, she utterly fails to see her own guilt in that arena.

What was one of the most memorable moments of Woman Walking Ahead?

The aforementioned Sundance experience had to be the most ridiculous effort at creating a harrowing drama out of what was essentially a camping trip. Unless she feared reprisals from angry Lakota, it's hard to see where the danger really existed. The whole account reeks of condescension.

Insofar as the narrator captures the holier-than-thou egocentrism of the author, it was reasonably accurate. It would have been nice to pronounce words like farcical and places like Bedford-Stuyvesant correctly. But that's minor compared to what's wrong with this book.

It had the makings of an interesting story, finding about a woman who was a major connection between two very different worlds. It might have been nice to hear her opinions. But that is lost in all the idle speculation and conjecture. Most of the author's guesses are wrong, and those that are correct are hardly worth the house of cards she builds on them. Hence the reason for the headline, just make it fiction and the sketchy scholarship disappears.

I've never not finished a book. And I was determined to finish this one, if only in the hopeless anticipation of a redeeming end, which never came. There's a brief "come-to-Jesus" moment near the end, but it falls flat.

I love anything to do with native cultures, particularly the Lakota, Sitting Bull, Crazy Horse, etc.... This was just ruined by the author's inability to set aside her righteous indignation.

How THIS steaming turd of a “book” ever got published, much less put on film, is a testament to the idiocy of the polluted values of our modern view of worthiness. I couldn’t even finish it—it was abject torture. Listening to the “speaker” use fake voices for different characters was something somebody got paid to conjure up? Why do all of her ethnic voices sound like a completely different ethnicity than that of the person that she’s trying to portray?

I was simply ASTONISHED at her blatant, repetitive use of mangled words: pronouncing BedStuy in Brooklyn as Bed “Stewie” (not “STY,” as in short for Stuyvesant) had my jaw hanging open after the SECOND time! Didn’t ANY idiot involved with this exercise in self-indulgence even LISTEN to this crap-burger before they released it to an unsuspecting public? Profoundly intolerable and a theft of my money. It disjointedly jumps back and forth with no rhyme or reason amongst characters, the writer, people in the writer’s life—just nauseating to even force myself into repeated tries at getting through it.

I ended up feeling sorry for myself for sitting through it, and MORE sorry for Tatanka Iyotake for sitting still—or rolling over—in his grave, somewhere, forced to be a part of this toxic-narcissistic neo-feminist self-worshipping amalgamation of explicating the author’s glaring psychological-issues-as-bullshit. It’s simply my own pity and kindness for the author’s child that had me refrain from wishing that she’d driven off of one of those Dakota roads that she seemed to obsess over. AAARRRRGGGGH! What a waste of time that I’ll never retreive!