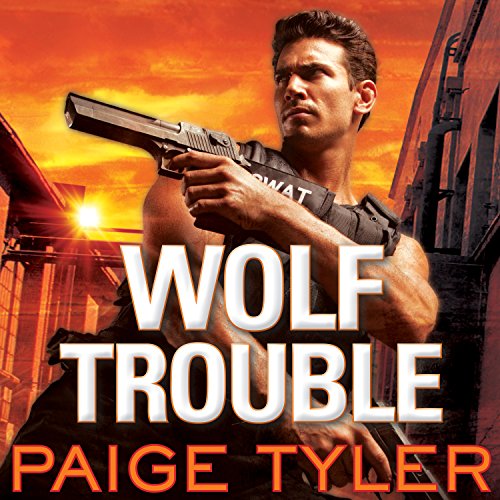 There's never been a female on the Dallas SWAT team, and Senior Corporal Xander Riggs prefers it that way. The elite pack of alpha male wolfshifters is no place for a woman. But Khaki Blake is no ordinary woman. When Khaki walks through the door attractive as hell and smelling like heaven, Xander doesn't know what the heck to do. Worse, she's put under his command, and Xander's protective instincts go on high alert. When things start heating up both on and off the clock, it's almost impossible to keep their heads in the game and their hands off each other....

" Wolf Trouble is a steamy, action-packed walk on the wild side!" (J. D. Tyler, author of The Alpha Pack series)

What listeners say about Wolf Trouble

Sizzling with action, suspense and romance

So has anyone told you about the nice Whispersync for Voice, Audible Narration? Well if you haven’t heard of it, let me tell you it’s wonderful. Remember those days when you would listen to bedtimes stories, or maybe a teacher or librarian that would read aloud to you? Well, I’m betting they aren’t as good as some of the voice actors that present the unabridged versions of books that are available. Wolf Troubles just happens to be one of them. In fact, all of the books in this series are available in Whispersync. It’s great because you can either just listen to the story, follow along as it’s read or switch back and forth. The other great thing is that the price is majorly reduced when you buy the Whispersync version to go with the book rather than as just an audible file. Wolf Trouble is narrated by Abby Craden. She did a superb job and her voice modulation skills rock.

Wolf Trouble has been on my list to buy since before it came out and I hadn’t been able to get to it. Then I found out the third in the series was coming out. It put me in panic mode because I wasn’t caught up with the second let alone third coming out. You can guess what I did… I hurried and bought Wolf Trouble… then I stayed up all night listening to it. Was it worth the all-nighter? Oh, most definitely. I mean what’s not to love? Hot, hunky SWAT officers that just happen to be alpha wolf shifters? Check. Feisty alpha females that are more than enough to give said alpha’s a run for their money? Check. Bullets flying, action and suspense mounting, heroic rescues, reprehensible criminals and dirty cops stirring up trouble… Check, check, check… well, you get the picture. All of this before you get to the building sexual tension and scorching hot love making. Needless to say, I’m a bit addicted to stories of this nature.

Wolf Trouble is the story of what happens when the city of Dallas decides the best SWAT team in the country isn’t politically correct because it doesn’t have its requisite female officer. I mean forget whether the female is truly qualified or that hiring someone that doesn’t fit not only put every other officer’s life at risk but those they serve as well. Lord save us from the bureaucrats and lawyers running city hall. The one saving grace? The pack alpha, Gage has had his eye on a gal he suspects is a werewolf like the rest of them for a while now. Looks like his timeline just got moved ahead a bit.

Xander has absolutely no problem dealing with a woman on his team, especially if she is in fact, a werewolf like the rest of them… that is until Khaki Blake shows up in his squad room. One long whiff of Khaki and Xander knows he’s in trouble. Her allure is overwhelming. What’s a guy to do when getting involved with your subordinate is totally off limits? Why, give her hell of course. Hell being the cold shoulder, extra intense and demanding training and whatever else he can throw at her. The only problem? She’s good, damned good and that allure is just getting stronger.

Khaki Blake knew she wanted to be a cop from the time she was ten-years-old. She’s a damned good patrol cop too! Lately though things have gotten a bit out of hand. One nasty as get out ex-lover and her world turns upside down. Backup is non-existent and she keeps ending up in sticky situations. The kind of sticky where her blood keeps getting spilled. But something strange is going on because now she’s healing at astronomical rates and her speed and strength have grown unbelievably as well. To say she is a little clueless to what is going on is to put it mildly. Then her life turns around on a dime. Sargent Gage shows up in Washington state to recruit her for the Dallas SWAT team. If that isn’t shocking enough, he tells her she’s a werewolf. All things considered, though, there is a ring of truth to his words.

With one wolf being stubborn and too pig headed to realize what’s going on with his hormones and the other too new to have a clue, it takes these two a while to get together. In the meantime, the sexual tension between the two is threatening to burn them down. All that aside they still have to deal with the very real concern of chain of command and fraternization. Oh and did I mention the very real threat of crazies and criminals added to the mix. In the end they’re faced with the question… mate? Pack? Career? Is there really a choice to be made?

I really like Ms. Tyler’s Special Wolf Alpha Team and I’m sure you will as well. Wolf Trouble had just the blend of action, adventure, suspense, romance, and sex I was looking for. I’m really looking forward to reading In the Company of Wolves which comes out on December 1st.

The story was okay. Not great, but entertaining enough. Unfortunately, the narration makes it barely tolerable.

I love that there is so much action. The narrator I'm still on the fence about. The men seem less angry , loud, but they still seem a bit uptight. I like story and characters cohesiveness.

Better than the 1st

I enjoyed this book more than the 1st!!! Great book!!! I hope this keeps getting better and better :) I’m hooked!!

Holy smokes! This book was great. It has suspense, a creepy ex and lots of steam. Its the second book in this series and I can't wait to listen to the rest.

This story was really good. This was the first novel of the series that I have listened to. The narration was very good and I love the sense of family like connection of the team members. I will now check out the other novels in the series.

This story is an enjoyable shifter fantasy with mainly romance and some suspense and SWAT team excitement. It was a bit too long with too much repetition and description at times. Still very entertaining with very good narration. Four stars for the story, five stars for the narration.

Just has everything that's amazing!

I love all the SWAT men in this series... And they are good men... great even. The stories are fun! Action packed, full on romance, steamy smexy scenes, good back stories for characters, good drama/action and a full of fun story line. I enjo6y these stories. But they aren't in depth kristen ashley stories. Lol... But really good just the same. the narrator Abby Craden did amazing! No frog voice like some reviewer said. She was perfect! And perfect for this series. give it a try, it's totally worth it! if you like action/drama/mystery/some comedy/ sexy sexy time/ suspense and a HEA... this is perfect for you

I liked this one a lot. Especially the way Khaki had to learn to be a werewolf.

Although she did a good job, I don't really like the narrator's voice, but that's just my preference & may not bother anyone else.

good story, enjoyed while driving , made the time

good follow up in the series, I will continue with the series . I hope the rest are atleast as good.