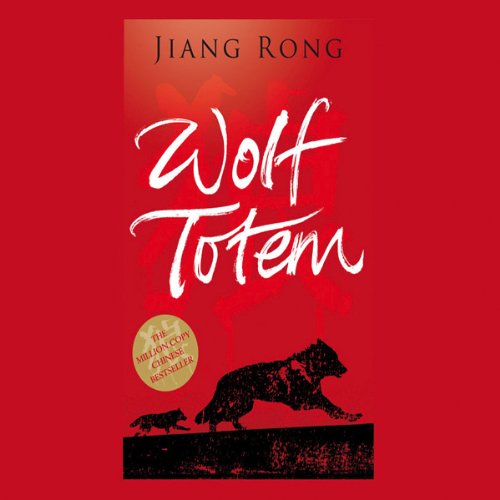 Beijing intellectual Chen Zhen volunteers to live in a remote settlement on the border of Inner and Outer Mongolia, where he discovers a life of apparent idyllic simplicity amongst the nomads and the wild wolves who roam the plains.

But when members of the People's Republic swarm in from the cities to bring modernity and productivity to the grasslands, the peace of Chen's solitary existence is shattered, and the delicate balance between humans and wolves is disrupted. Only time will tell whether the grasslands' environment and culture will ever recover.

Wolf Totem has been a sensation ever since it shot to the top of the Chinese best-seller charts in 2004. A beautiful and moving portrayal of a land and culture that no longer exists, it is also a powerful portrait of modern China and a fascinating insight into the country's own view of itself, its history and its people.

The imperative to pick this one up was an article that I read in a Saturday Review section of The Guardian, where it was listed as one of the school reading books on the list of the Eton head of English - well, if its good enough for them, its worth a look for me.

Its a simple, complex tale where the progress of life under the Mao marching cosmos is contrasted against Tengri-observing herding population of Inner Mongolia. Inevitably, there are continual references to the underlying ways and rhythms - but Big Life and Little Life are beautifully sketched out and the metaphor of the Wolf is worked but not over-worked.

This is a long book which needs continued attention (lots of prep!) but there is no effort to sustain attention since it is well written in translation. I was thankful for the recommendation - privileges flow from those who are prepared to work for their education, a universal principle as much at home in super-charged China as on the playing fields of Eton.

Really sad that in the name of development we are destroying the land and dangerously playing with the balance of natural forces. A must read book.

This book is truly amazing. As an in depth view of a (sadly) dying culture it fills me with anger that such a precious way of life is being overrun by "modern" ways, and as a picture of an ecosystem it is simply beautiful.
For anyone who loves wolves the book can be very distressing as it is the story of a people who don't share our views of cruelty, and at time it is a gruelling listen, but the quality of the writing and the honesty of it all makes it worth facing the reality of the way of life the Mongols had in all its facets, good and bad.
My only small criticism is that the reader has an odd way of speaking - rather deadpan and at times without tones in his voice. I think it would have been easier to listen to if the reader had a more variable voice, but the quality of the writing overcomes this. The translation is good, but very American - again it would have been more enjoyable from a literary point of view if the translation had been more "International" but I would say that this book is a true masterpiece.