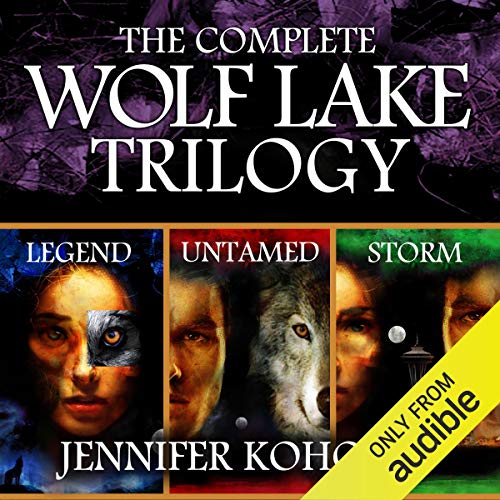 Together at last! The entire Wolf Lake Trilogy is now available in one place.

See how it all started in Legend: Orphaned as a child, Samantha grew up into a strong, but lonely woman working on her doctorate thesis by researching the history of myths and legends. But when she uncovers an actual werewolf pack, the world of myth becomes her new reality.

Next, listen to Roland's story in Untamed: Scarred for life after surviving a bitter betrayal, Roland discovers a kindred spirit when he finds Natasha beaten and left for dead. But will their relationship be strong enough to survive when the pack comes under attack?

Finally, see how it all ends in Storm: Still reeling after the loss of a valued pack member, Nafarius wants nothing more than to keep his pack safe. But when Sam is kidnapped, Nafarius will stop at nothing to get her back, even if it means asking for help from those he doesn't trust.

Jude successfully fought her way up in the pack taking her place next to Nafarius and Roland as the pack's gamma. Now all she has to do is convince Nafarius that she's strong enough to do her job and that he can trust her not to get herself killed.

What listeners say about Wolf Lake: The Complete Trilogy

story could have been good if not spoilt by too many sex parts. wasted time.

caution about the sex in here. but good story line

I liked the story line. the story was well thought out, characters well done. Just way to much sex. Had to get past that a lot in the first two books. less of it in the 3rd.

I don't want to spoil it for others, so I will just say she comes in, in the 3rd book. :) and is very sassy, and bold. loved her.

When we get to know... there are wolfs real ones out there.

no. but I don't go see many movies.

Loved everything about it!

Jennifer Kohout is an amazing writer. She describes everything so well without filler to take up writing space. The story has depth, action and intelligent characters.
Wolf Lake is brought to life so well by Michaela James. She does both male & female characters without those awful high-pitched tones that have ruined audible books for me before.
I recommend this highly!

To much in your face Sex

In book 3 when Sam is being saved.

I enjoyed the characters and how well done they were but I feel the sex could have been left more to the imagination rather than in your face.
I liked how in depth she got with the story but would think twice about another book from her because of the in your face sex.

I was not expecting such an in depth story, with detail world building...but I was pleasantly surprised! This was soooo good..... I think I liked the banter and tension between the characters best. I loved the Beta's story...book 2....

Worth credit or sale... maybe a buy if u like shifter books...

I was pleasantly pleased at this series. I enjoyed it very much and look forward to reading more books from this author.

The British narrator speaking at light speed ruined a story that might have been salvageable. Occurring in America's northwest, the English accent completely threw the thin storyline of werewolves coexisting in our urban reality. The speed of the narration matched the storytelling where I was forced to question, 'two weeks passed and the emotional development is static. I might've been able to suspend belief if I could live with the narration. Alas, I couldn't even finish it.

Pretty great story, not my favorite narration but only because of some of the accents. More importantly these books have my favorite sex scenes. Out of my hundreds of books, my mind drifts back to the sex from these books first. Its 3 books in one just listen of you like PRNs. Try slowing down the the narration it helps a bit.

the book was good. the narrator went way to fast for the story. like she was trying to finish in a hurry.

Liked the books fairly well, I actually liked 1 & 2 better than 3. I just couldn't follow 3 very well. There were allot of new characters and, breeds if u will, introduced in 3 and it didn't really have a main plot.

very good books! would like her to write a book about the twins. just a thought

Not very original & naration not good

Would you try another book written by Jennifer Kohout or narrated by Michaela James?

Would you be willing to try another one of Michaela James’s performances?

Not if she reads it like this. Some of her pronunciations were like bad British costume drama and some were unconvincing Americanese, but the most annoying thing was the speed she was reading at and lack of paragraph pauses. Most akin to rattling off a shopping list.

Do you think Wolf Lake: The Complete Trilogy needs a follow-up book? Why or why not?

can't see why to bother