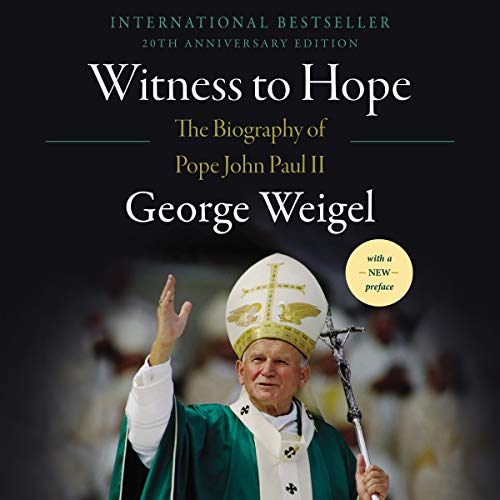 “Fascinating...sheds light on the history of the 20th century for everyone.” (New York Times Book Review)

Now, with an updated preface, the latest edition of the definitive biography of Pope John Paul II that explores how influential he was on the world stage and in some of the most historic events of the twentieth century that can still be felt today.

Witness to Hope is the authoritative biography of one of the singular figures - some might argue the singular figure - of our time. With unprecedented cooperation from John Paul II and the people who knew and worked with him throughout his life, George Weigel offers a groundbreaking portrait of the Pope as a man, a thinker, and a leader whose religious convictions defined a new approach to world politics - and changed the course of history. As even his critics concede, John Paul II occupied a unique place on the world stage and put down intellectual markers that no one could ignore or avoid as humanity entered a new millennium fraught with possibility and danger.

The Pope was a man of prodigious energy who played a crucial, yet insufficiently explored, role in some of the most momentous events of our time, including the collapse of European communism, the quest for peace in the Middle East, and the democratic transformation of Latin America. With an updated preface, this edition of Witness to Hope explains how this “man from a far country” did all of that, and much more - and what both his accomplishments and the unfinished business of his pontificate mean for the future of the Church and the world.

What listeners say about Witness to Hope

After eagerly awaiting for months for an unabridged version of the audiobook to “Witness to Hope” to be released—this ain’t it. When the notice appeared on Audible, it clearly said that the new audiobook was going to be unabridged, although it eventually listed something only 28 minutes longer than the original truncated audiobook. One of the two points had to be a typo, and I was hoping it was the time length. No such luck. Harper’s cover art had a blurb celebrating having added the new preface, but we still have yet to see the basic investment of doing the entire book. What a waste of an opportunity. As much as I admire the full text, I will give this review minimal numbers in order to draw attention to it. At least Amazon/Audible can do us the favor of correcting the mistake of listing this as “unabridged,” but the folks at Harper can also correct this silly disservice and give us the full-length treatment of one of the most significant figures of the 20th century. There is an unabridged audiobook of the sequel to “Witness to Hope,” the more topical “The End and the Beginning.” But when it comes to the straight narrative of a full biography, it is a real waste to offer readers both an abridged version of this epic life, *and* also a *slightly longer* abridged version. 🙄