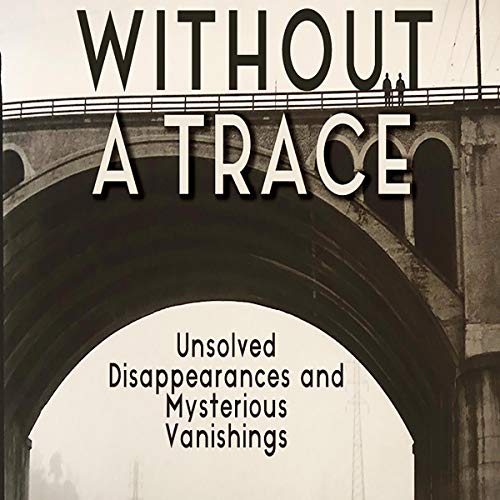 Without a Trace: Unsolved Disappearances and Mysterious Vanishings

We all love a mystery - but what about a mystery that has no solution? Delve into the shadowy world of unsolved disappearances and people who have vanished without a trace, never to be seen again. Such strange and chilling tales run the gamut of the terrifying and the bizarre and include crime victims, lost explorers, ships vanished at sea, outdoor disappearances, and supernatural mysteries that defy all explanation.

Among these sections you’ll find accounts of America’s Lost Colony, history’s most famous ghost ships, famous figures who vanished into the unknown, the unknown fate of America’s first kidnapping for ransom, a vanished heiress, lighthouse keepers who impossibly disappeared, the killer who escaped the noose - permanently, the Grand Canyon adventurers who were never seen again, the Prohibition lawman’s nephew who was never found, the Ohio sorority girl who never made it home, the abducted housewife who disappeared, the Hollywood starlet who left her family behind, a missing West Point cadet, the babysitter who vanished on Halloween, the missing Texas couple who may have been Russian spies, the little boy who walked away for good in the Smoky Mountains, a missing heiress to a candy empire, a missing TV news reporter, a long distance runner whose run never ended, plus infamous vanishings of figures like Theodosia Burr, Amelia Earhart, Glenn Miller, Judge Crater, Jimmy Hoffa, and far too many more!

Just remember as you listen to these stories, that if these people so easily vanished from the face of the Earth, then it means it could happen to anyone - perhaps even you. You may want to listen to his one with the lights on.

What listeners say about Without a Trace

Not what I was expecting ...

This book has close to 50chapters ranging anywhere from 15-45min per chapter, and they are arranged chronologically staring in the late 1800’s. That wouldn’t be so bad , if he would have included more cases within this century. For example, there are 45 chapters in the book, and I didn’t get to year 1978 until chapter 40. So the entire book are brief synopsis from the late 1800 and early 1900s which IMO was quite boring. I like to listen to more recent cases, that’s just me.

Troy Taylor always gives the very best in all his books. All true stories well researched and beautifully told. He leaves behind the myths told and retold by other authors and digs deep into the truth and facts. I have read many of his books but I eagerly await the next Audible installment, when Mr. Huddleston will again bring this history to life with his soft baritone and elegant cadence.

As someone who is a student of paranormal, forensics and history I absolutely found this book fascinating. The stories were fast paced but well told. The essences were captured of complex mysteries That left me wondering. I also heard some cases I was peripherally familiar with in a vivid way that brought story to life even from other time periods.

This book is a time machine, a tribute to wonder, narrator and author just fit, I listened to it twice and I never do that. I will continue to follow this unique and talented author.

I thoroughly enjoyed this book. Troy Taylor has kept the stories short, but has varied the different characters, settings, and outcomes (or inconclusive outcomes) enough to keep the listener interested and wanting more. Okay, that story’s over, you think— what’s next? Charles Huddleston does an excellent job as narrator, adding accents, questions, and other subtle remarks. I particularly liked the Amelia Earhart and Glen Miller chapters. I was familiar with their disappearances, of course, but Taylor offers informative recaps. Overall, it’s a good book to have at your bedside and listen to several stories a night. Before you know it, the time remaining has disappeared.

Do not waste your time.

This is literally a list of names with no background story etc it’s like being read the yellow pages. Avoid.