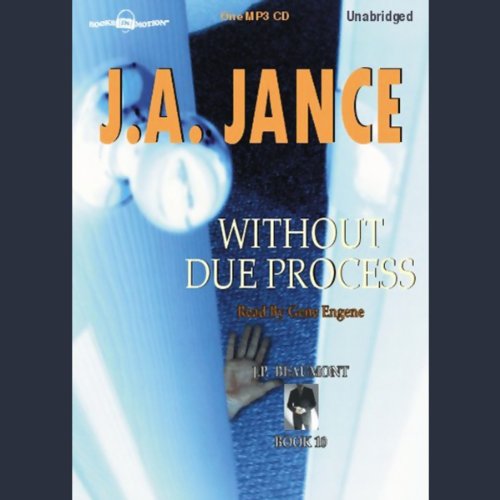 By: J. A. Jance
Narrated by: Gene Engene

This is my tenth out of fourteen in the J.P. Beaumont series. It did not disappoint. It had everythingI look for in light reading entertainment-a tight, well thought out story line- witty and intelligent fun- without the gore of some detective series. Gene Engene is a gifted narrator. I love his deep, pleasant voice. I look so forward to each book in this series. I will be very sad to say goodbye to J.P. Beaumont, and all the other characters I have learned to love since reading my first J.P. Beaumont book. Thanks J.A. Jance for a wonderful series!

another great listen from this duo

J.P. is just so personable and real, and Gene Engene makes the book come alive. His delivery is crisp, clear and enjoyable.

Another good read from J.A. Jance.

interesting plot would not of thought of it. I like the way Jance writes mysteries.

Gene Engene is getting better at his narrative. His characters are more identifiable. Rage is still noticeable, where annoyance would be more appropriate.

The best is that there are a few boring parts in this story. What I liked least was "too much Kramer".

I'm used to that J.P. character since a long time why I intend to continue reading J.A. Jance's stories about him.

Who would you have cast as narrator instead of Gene Engene?

Gene Eugene is OK with the J.P Beamont character but I regret to say that several of the
other characters sounds like some kind of joke. A female narrator for the femal voices would be aprreciated.

Did Without Due Process inspire you to do anything?

J.P. Beaumont story number 11 seems to be "Kramer Free" why I look forward listening to
that one.

while Gene Engene reads I realize I'm often am not listening. this is the 10th book but his reading has been bad from book #1. I met J P mid series with a very good reader & ordered the series from book #1 up to the cd's I already had. if I had known how Gene's reading would reduce my enjoyment I think I would have skipped J P's early years.

I can't begin to explain!

Several narrators should have been used. It appears the narrator simply lowered his voice (not very convincingly) or in the case of a child raised it. I doubt I will finish this book it is so irritating to me.

The use of multiple narrators.

This was a pretty good listen and I personally enjoyed it enough to stay with it through to the end. The characters are engaging enough so that I can see how Jance has kept this series going all these years. The story line is interesting but not riveting. I would definitely recommend this for listening to especially for folks who might find Connolly or Sandford novels a little rough. Gene Engene does a nice job of reading, his style fits the characters well. The voices are a little contrived and it's kind of like listening to ten hours of a Wilfred Brimley oatmeal or life insurance commercial. If you like that style, you'll really enjoy Engene' reading. For me personally I would choose the Davenport or Bosch novels over this series. I have listened to many of those and their plots really crackle along in comparison to Beaumont's. Due partially to Engene's reading style and partially to Jance's writing, Beaumont comes off as kind of a geezer - even though at one point in the book he talks about his "oncoming middle age". He makes many more references, though, the the bone spurs in his feet and how much pain he's in. Another point to mention about this book: this particular episode is getting a little long in the tooth. Here we have "newfangled" cell phones and a fax machine as an example of the latest technology. The fact that the story is interesting at all is testament to Jance's solid characters and Engene's interesting reading style. There is a little bit of graphic description of the murder scene in the beginning of the book, and a few mild swear words throughout - nothing like the Connolly or Sandford books in this regard. Some folks might find this appealing but for me personally it kind of lent to the overall "geezer-lit" feel and made the police drama seem a little less realistic. Overall: not great, not bad, might recommend starting with one of the newer books in this series though if you were going to give it a try