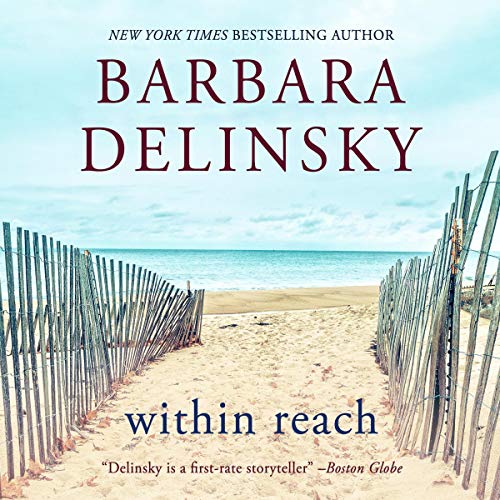 The charming vacation house on the coast of Maine was meant to be a heavenly retreat for Danica Lindsay and her husband Blake, a place where they could mend the wounds of a strained and tired marriage. Instead, she finds herself mostly there alone while Blake's political star is rapidly rising back in Boston. Were it not for the companionship of her new neighbor, gentle and caring Michael Buchanan, Danica would surely be overcome by loneliness and despair.

But a friendship that is cherished and uplifting is slowly transforming into something less innocent, more passionate - something that could easily be called love. For the first time in her life, a chance for true happiness may be in Danica's reach. But how can she grab onto it when she remains another man's wife, bound by her vows to a marriage plagued by doubt and pain...and by secrets so shocking that an entire nation will take notice?

What listeners say about Within Reach

Loved the characters and the Story. Added Joy to my day! Shared title with Friends!

a strong woman fighting her way to self awareness

At times I found the story repeating itself. Michael and Denny going.round and round again, with so much patience, every time with her "need to be moral, fair, with a conscience !! I lost patience with her. Get up and Be your own person, you do not really owe anyone anything except to yourself. But in the end she comes out on top, Happy End!! Love wins all!! Good storytelling!!

Tried hard to give it a chance to get better.

Understandable story but just wasn’t enough to hold my attention in overall story and performance.

Within Reach might be more aptly titled Within Minutes. Two strangers meet on a foggy beach and within minutes are practically soul mates. I gave up after the first couple of chapters because I couldn't tolerate the Reader nor the false spontaneous bonding that occurred between the main characters.

Great story. Just had some trouble trying to hear Michael speaking. I wear hearing aids and had to put them up especially if I was driving. Otherwise it was a very interesting book.

Flashback to the past.

Keep in mind this story was written in 1986, and set a few years earlier than that. It's hard as a woman to listen to how controlled Danika is, however makes you proud of how far we've come.

Excellent story...Too bad it's not been updated!

Written originally in 1989, the lack of updates (no cell phones, in particular) detracted from its believability in the present day. I enjoyed the story...though sad to think this womans' life was so manipulated by her father & then her husband.

Not the Barbara Delinsky I remember

A story of forbidden romance, but her writing makes it all uncomfortable.This story is missing the depth of character that most of her books include. It left me feeling that they weren't important enough to me to care what happens to them. If you have never read a Delinsky novel, pick a different one.

I found this book very disappointing. I have read many if not almost all of Barbara’s books and I think she is wonderful. This I felt was just chicklit. You knew from the beginning how it was all going to end. I feel I won’t be buying another be Barbara Delinsky.😔😔