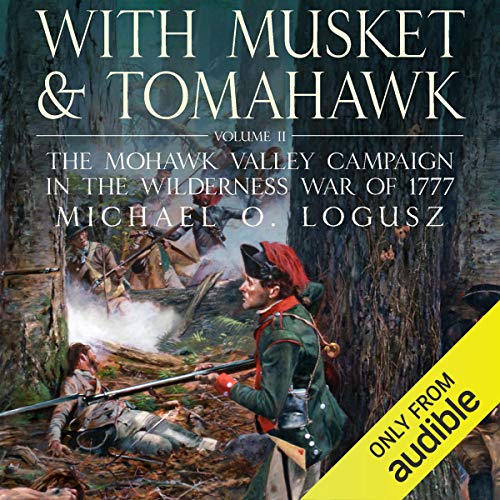 With Musket and Tomahawk Vol II

A comprehensive look at the brutal wilderness war that secured America's independence… With Musket and Tomahawk is a vivid account of the American and British struggles in the sprawling wilderness region of the northeast during the Revolutionary War. Combining strategic, tactical, and personal detail, this book describes how the patriots of the recently organized Northern Army defeated England's massive onslaught of 1777, thereby all but ensuring America's independence.

Conceived and launched by top-ranking British military leaders to shatter and suppress the revolting colonies, Britain's three-pronged thrust was meant to separate New England from the rest of the nascent nation along the line of the Hudson River. Thus divided, both the northern and southern colonies could have been defeated in detail, unable to provide mutual assistance against further attacks.

Yet, despite intense planning and vast efforts, Britain's campaign resulted in disaster when General John Burgoyne, with 6,000 soldiers, emerged from a woodline and surrendered his army to the Patriots at Saratoga in October 1777.Underneath the umbrella of Saratoga, countless battles and skirmishes were waged from the borders of Canada southward to Ticonderoga, Bennington, and West Point. Heroes on both sides were created by the score, though only one side proved victorious, amid a tapestry of madness, cruelty, and hardship in what can rightfully be called "the terrible Wilderness War of 1777."

What listeners say about With Musket and Tomahawk Vol II

Exceptionally interesting, well written and read. I learned a lot about an aspect of the Revolutionary War of which I knew very little. Saratoga sucks away the attention for most when writing and studying this period of the war. This work goes far to give the siege of Ft. Stanwix and the Battle of Oriskany their proper due. Being an Oregonian I was also intrigued to learn more about "up-state New York" of which I have had little experience.

Chronologically of course this work should be Volume 1 instead of # 2 in Logusz's two volume set, so I listened to it first. But this work was so good that, even though I have studied the British debacle at Saratoga many times, I am moving on to Volume 1 (Saratoga) to see if I can learn even more about this event.

What would have made With Musket and Tomahawk Vol II better?

The "wilderness war" is problematic as the author never investigates the nature of the "wilderness" so critical to the story he is trying to tell. The Mohawk Valley was not the "howling wilderness" presented in this work, peopled with barbarous (and vanishing) Natives and freedom-seeking settlers. This was a complex yet relatively stable borderland between British North America and indigenous America. Layers upon layers of conflict and negotiation--ethnic, political, and economic--underlay Logusz's narrative. Most Early American historians have largely moved past the quaint notion of a primeval forest untouched by "civilized man" in favor of more vibrant, enriching narratives that take into account cultural, social, and environmental dimensions that culminated a wave of violence that was just beginning in 1777.

This history fell short of its intended goals and was disappointing in its narrow scope. The author promises stories from "combatants on both sides--the human element of warfare" and argues these are "crucial the history of the Wilderness War." Unfortunately, he does not deliver. First, his scholarship disregards the growing body of literature surveying the ethnic, racial, and political tensions simmering in the Mohawk Valley on the eve of Revolution. Even a cursory nod in this direction would have added greater understanding to why the conflict of 1777 was so violent, so personal, and so destructive. Second, he casts indigenous peoples as one dimensional blood thirsty "savages" innately programmed to scalp, maim, and steal without regard. Aside from being patently false and willfully misrepresentation, this characterization disregards a generation of historiography recovering Native American narratives of violence and resistance to imperial encroachments. The author's sin is more egregious because he claims to present a complete "human" narrative of the "terrible Wilderness war." This book is not about ordinary people, it is about military maneuvers and the people who executed them. Had the author been genuine about his intentions--to write a comprehensive account of the military activity in the Stanwix/Mohawk Valley Campaign from a unabashed colonial perspective--he might be forgiven for his omissions and errors.

We must understand the wilderness war was a civil war; Tories and Native Americans were "Americans too." The Patriots did not have a monopoly on American valiance and virtue. By privileging the victors' narrative, the author impoverishes the broader history of the campaign by denying agency to all Americans involved. Factual errors abound, as it seems the author takes at face value many of the 19th century antiquarian hagiographies that elevated American heroes at the expense of the truth. For example, British superintendent of Indian Affairs Sir William Johnson was not the debauched libertine who dropped dead--as the author would have us believe--from any number venereal diseases and ailments. He died of exhaustion trying to avert a catastrophic Indian War in 1774 following the cold-blooded murder of Native women and children at the infamous Yellow Creek massacre. Moreover, the author makes anachronistic value judgements such accusing British and Loyalist leaders of "war crimes." In doing so, he retroactively imposes his own modern sense of morality in warfare on actors in the past without properly contextualizing the violent space they inhabited. Atrocities occurred on all sides, particularly in the borderlands, and singling out specific class of actors does little to further the reader's comprehension of the "terrible wilderness war." The listener would have been better served by a contextualization of the culture of violence and the standards of warfare that had existed for all combatants in that arena.

The ending was rushed and unsatisfactory. The author makes recriminations against British and Loyalist leaders while turning a convenient blind eye to reciprocal violence conducted on behalf of the United States. A more complete discussion of such violence would not have done violence to the memories of the genuine heroes in this conflict. By contrast, setting them in their proper milieu would have demonstrated their exemplary character in the face of unremitting violence.

At the end of each sentence, Mr. Johnson takes a loud deep breath. This becomes distracting at times as it creates an unpleasant cadence.

I enjoyed Volume 1 but Volume 2 more so. This is mainly due to the telling of battles often glossed over even in complete retellings of the Revolution. Highly recommended read.

Very repetitive. Simply repeats the first book. Not much new info. This could have been easily as a single volume.

An excellent history of a lttle covered campaign of the American Revolution in 1777. Highly recommended.