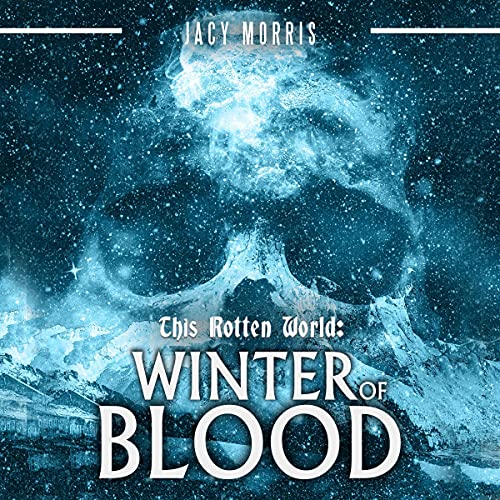 Winter falls hard on Oregon, burying the world under snow and ice. One group of survivors, stuck in a tomb of their own creation, fights to survive, while another group treks across the snowbound countryside, leaving a trail of bloody footprints in their wake...and an army of the undead.

The Pacific Ocean calls. Safety calls. But as Mother Nature rakes her frozen claws across the land, the coast could hardly seem further away. Will our survivors make it through this Winter of Blood, or will they be buried by an avalanche of the dead?

What listeners say about Winter of Blood

not sure why I bought this

narrator is annoying. every voice sounds pretty much the same and he frequently puts the wrong inflection on words. writing is bland. nothing really happens. skip.

Don’t miss this one!!

The 4 book story arc is one of the best I’ve ever read!! Amazing!! Jacy Morris brings you so close to the characters, you feel cold tired and afraid like you’re in the middle of their nightmare. What a story!!

A Nail-biting Continuation Of This Rotten World

Since being lucky enough to find out about Jacy Morris' undead saga I've blasted through all 4 of his 'Rotten World' audiobooks and although I'm going to have to patiently wait for the fifth instalment to be released on Audible I'm so glad to have entered the world of Mort, Joan, Rudy etc. Winter of Blood (book 4) has ended on such a dramatic cliffhanger I cannot wait to find out what will happen next for the surviving characters. I only hope the next book (Choking On The Ashes - book 5) will arrive in audiobook format very soon.

...this is definitely a cliffhanger of a book. As I write this brief review, Jacy Morris' latest offering in the series has just been released and my only regret now is that I probably won't get to listen to T.L. Howell's striking narration because I'm not sure I can wait for it to come out on Audible and will likely have to buy Choking on the Ashes in book form instead (hardly a terrible punishment though). Anyway, if you haven't happened upon Morris' work yet, you better get cracking, as you're missing out.