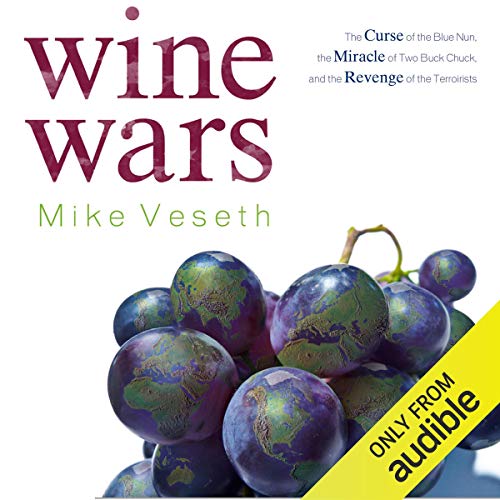 Writing with wit and verve, Mike Veseth (a.k.a. the Wine Economist) tells the compelling story of the war between the market trends that are redrawing the world wine map and the terroirists who resist them. Wine and the wine business are at a critical crossroad today, transformed by three powerful forces. Veseth begins with the first force, globalization, which is shifting the center of the wine world as global wine markets provide enthusiasts with a rich but overwhelming array of choices.

Two Buck Chuck, the second force, symbolizes the rise of branded products like the famous Charles Shaw wines sold in Trader Joe's stores. Branded corporate wines simplify the worldwide wine market and give buyers the confidence they need to make choices, but they also threaten to dumb down wine, sacrificing terroir to achieve marketable, McWine reliability. Will globalization and Two Buck Chuck destroy the essence of wine? Perhaps, but not without a fight, Veseth argues.

He counts on "the revenge of the terroirists" to save wine's soul. But it won't be easy as wine expands to exotic new markets such as China and the very idea of terroir is attacked by both critics and global climate change.

Veseth has "grape expectations" that globalization, Two Buck Chuck, and the revenge of the terroirists will uncork a favorable future for wine in an engaging tour-de-force that will appeal to all lovers of wine, whether it be boxed, bagged, or bottled.

What listeners say about Wine Wars

I have survived my most painful audiobook experience yet.

"Wine Wars" is a fascinating book for those deep into wine, wine economics, and issues pertaining to globalization versus local character. While some of the subject matter can be a bit dry, Verseth infuses his narrative with interesting characters, amusing stories, and a fair amount of wit. I learned a TON from this book; it has deepened my understanding of the global, "glocal," and local wine and food trade immensely.

So why should you buy the physical or e-book instead of the audiobook? Simple -- the narration is simply AWFUL.

The narration is flat, lifeless, miserable, and soporific, taking a sometimes dry subject and completely ruining it. Wade lacks expression and his reading marches along like a droning professor -- featureless and bland. The bits of humor in the text pass by in the same awful metronomic cadence as the other content, blending into a soporific drumbeat of expressionless speech.

Adding insult to injury, Wade's pronunciation of foreign-language words is just pathetic and ruins the flow of the narration like nails on a chalkboard to anyone who has taken half a semester of French or Italian. Thankfully I never took German, so his presumed butcherings of those words passed by unnoticed. Heck, Wade even insists on pronouncing household name Robert Mondavi as "mon-DAH-vay" when even a 30-second visit to Mondavi's (ends with "vee") website would set him straight. Why on earth would the producer of a wine book stand for a narrator who can't pronounce the name of the most famous California winemaker ever and who clearly did no homework on any of the foreign language words in the text (and there are a lot of them, of course)?!?

In sum, this is a fascinating book for the right audience, but the narration absolutely turns the listening session into a nightmare. This is one book that it would be FAR better to read in print (or e-ink)!!!

The content of the book was well researched, and it was presented in a very understandable fashion. I learnt a lot of things from the book, e.g. how globalization and the two-buck-chuck phenomenon are affecting wine. I loved the part about Trader Joe's and Audi. One very interesting stylistic feature is the author suggesting wine flights for the listener to try, to drive home the points about globalization, etc (although admittedly I didn't try the wines he suggested).

Overall I felt that this was a good book to read, and I would recommend it for the content (5 stars for content, but -1 for incoherent/rambly style), but there are some points that I feel needs to be said, which brought down the overall rating (3 stars overall, 1 star for performance):


One main gripe I have with the writing is the massive amount of clichés and puns sprinkled perhaps too generously throughout the book. "Da Vino Code" (~"Da Vinci Code"), "Chateau Cash Flow", "McWine", "Glocal" (Global + Local), "Grape Expectations", the list goes on... It's way too cheesy, and makes the work sound flippant and juvenile.

The author kept repeating himself. I felt there was a lot of redundancy: "next, I'll tell you about X... now I'm telling you about X... To summarize, here's what I just told you about X..." (and then several chapters later, "recall that I told you way back in Chapter 2 about X"). There was way too much signposting and dreary repetition (the narrator didn't help: more below). It felt like the book was written in many sittings, and the author felt like he had to make the same point in every sitting, but then didn't go back through and streamline everything during proofreading. This was something that other reviews have pointed out too.

This next point, though not any fault of the author's, was a huge downer: the narration is simply awful! It soured my entire experience. The narrator (Wade) spoke too fast, and in a constant monotonous drone. It felt like he was trying to get through the book as fast as possible, rather than trying to tell a story. There was also a great deal of inconsistency in the recording. Halfway through a chapter, there would be a stark change of voice, maybe a sudden change in pitch. I know that these audiobooks are recorded over multiple sessions, but I've listened to many audiobooks, and this is the first audiobook that had such noticeable shifts in audio -- it probably happened at least three times that I noticed. Oh, and probably the worst, is his awful pronunciation. One would think that in reading a book about wine, one should learn to at least pronounce wine terms properly: Tokaji ("to-kai", not "to-ka-ji": it's one of the most famous wines in the world), Carmenere (he pronounced the last "re", as in "car-ma-ne-re"), Oenophile (which he pronounced "o-e-no-file"). There were others as well, such as the name of the oldest Chinese producer Changyu, the fruit Longan, and the Pandan leaf, which are slightly more forgivable (I felt so strongly about pronunciation that I made notes in my phone while listening!). You might think that I'm being overly pedantic, but I feel that learning to pronounce technical terms and jargon when one is being paid to narrate is basic professionalism. In addition, the book is written by a wine economist/writer who has a reputation to maintain. The listener hears only the narrator (speaking in the first person), and thus the author's reputation is being tarnished by a narrator who couldn't even do his homework! Given the reading speed, lack of consistency (his fault in addition to the sound professionals), and lack of professionalism, I would make the harsh claim that the narrator clearly doesn't take pride in his work!

The other big point I want to highlight is that there is a skip at Chapter 6 (the track that's named as Chapter 6 in my iTunes) at 5:07. The narrator is cut off midsentence, there's a pause, before the narrator begins a new section. Poorly done, Audible! :(

I’d you’re a wine geek, you’ll like this book. The caveat is you will need to accept that it seems apparent the narration is done via computer translation. The pronunciation of so many wine terms and varietals is what you would expect when you ask Siri to read a wine label. The dialogue and inflection is very flat, so set expectations accordingly. The content itself is pretty solid, but it is definitely something where the listener needs to be forewarned that many of the terms used are mispronounced.

Wanted to throw my phone - unlistenable!

This is the 2nd book I’ve returned over bad narration, and the 2nd book on the subject of wine where the narrator clearly had no idea how to pronounce common wine terms. There are plenty of tools available to allow a voice artist to learn how to navigate words like Tokaji, Gaja, Moët, Vitis Vinifera, Bardolino, etc. before getting behind the mic. I really care about this content, & love Mike Veseth’s writing. However, I couldn’t handle this abomination of a narration; it was without expression or any evident desire to communicate the stories laid out on the pages. Listen, anyone drawn to this subject- particularly as written by a wine economist - will be frustrated by this performance. We care about this subject, and expect the author’s message and expertise to be given the courtesy of a decent voice recording.

Great information but the narrator is so bland & robotic I had to quit halfway through. What a shame. Maybe a kindle version would be better.

Makes wine a window on the world

Of the eight books I've read about wine in the past year, this is one of the three I'm keeping around. Veseth offers thought-provoking insight into our consumption patterns and the cultural meaning of wine. He contextualizes our oenophelia in economy, culture, and climate. It all adds up to exceptional value and significant distinction from other wine books on Audible--turning wine into a lens through which we can view a great many cultural, scientific, and economic developments. If you enjoy thinking deeply about the world and you enjoy wine, this book is for you.

The narrator is a robot, but the book is interesting.

I learned a lot about wine from this audiobook. The information is interesting, though a bit dense at times. The narrator is horrible. He sounds like a robot, and reads through colloquialisms as if they were just another sentence in a report.

fun ride through the world of wine

loved the book. only downfall is I wish there was more. I have been to some of the places listed, looking forward to going back and trying the rest.

Wine geeks must read or in my case listen. Highly recommend for any of my fellow wine industry workers.

Just atrocious. The voice tone and inflections are monotonous and unnatural, distracting from the story. It's like the narrator didn't have any understanding of what he was performing. His interpretation of the foreign words - mostly French and Italian - has nothing to do with the real pronunciation, making them incomprehensible. A disgrace!

Excellent analysis of wine economics, it put my bi-weekly trip to the wine store into a new perspective. I'm probably gonna read the paper book too, to clarify the passages obscured by the performance.

I thoroughly enjoyed the insights into the world of wine economics - Mike Veseth manages to explain trends and mechanisms in an easily understandable and engaging way. The narrator, however, all buy ruins the book by reading in a non-stop way where he almost never pauses to draw breath, almost slam-poet style.