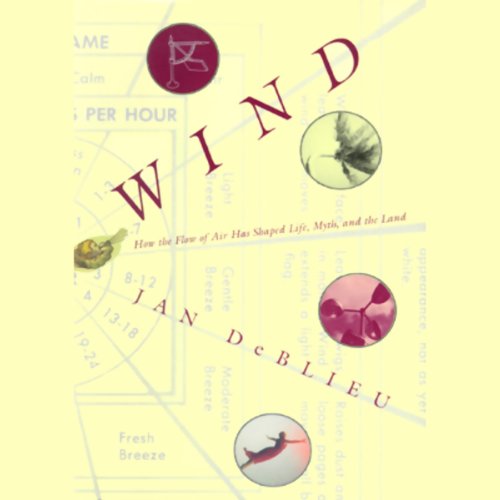 Siroccos, Santa Anas, chinooks, monsoons...the wind has as many names as moods. Few other forces have so universally shaped the lands and waters of the earth, plants and animals, the patterns of exploration, settlement, and civilization. Few other phenomena have exerted such a profound influence on the history and psyche of humankind. Wind touches all of us every day, yet remarkably little has been written about it, except as a component of the weather. In Wind, Jan DeBlieu brings a poet's voice and a scientist's eye to this remarkable natural force, showing how the bumping of a few molecules can lead to the creation of religions, the discovery of continents, and the destruction of empires.

DeBlieu visits the water observatory at the summit of Mount Washington, where some of the highest wind speeds in the world have been recorded. She talks to survivors of a deadly tornado in Iowa, tries hang gliding over North Carolina's Outer Banks, and climbs sand dunes in Oregon and slickrock formations in Utah - everywhere exploring the effects, subtle and brutal, comforting and terrifying, of the wind.

"This is nature writing at its most expansive and rewarding." (Booklist)
"The wind will never be the same for [listeners] after finishing this book, its presence now heightened and explicated. DeBlieu has achieved the Big Two: enlightenment and high entertainment." (Kirkus Reviews)
"[Woods'] melodic voice seems to smile while describing the influences of wind on life forms, geography, and our planet's environment. The narrator's cheerfully pedantic delivery suits a book in which science is mixed with the author's own life experiences." (AudioFile)

What listeners say about Wind

Clearly this was not the book for me. I found the first 2 cd's so painful I threw it away. I was looking for a more scientific and less personal story - which was not the book the author wrote. I would recomend it if you are interested in lyical descriptions of wind - but you don't really want to know about the science.

OK, some interesting stuff, but not enough

This felt like part travel log, part science book. I learned some stuff, but it seemed a bit long for this. If you're really interested in the topic, I'd say go for it. But, it's not like some books that I tell friends about.

This book is like salt-free potato chips, empty calories without anything interesting.

Not as informative as I would have wished.

Would you try another book written by Jan DeBlieu or narrated by Mary Woods?

Overall, not a book for me to recommend. I understand that scientific works can be made more easily understood by such books. A Brief History of Time for example. Loved it. However, the narrator could not get me interested in this somewhat disjointed approach to explaining some of the phenomena of wind currents around the world.

Back to something more interestingly portrayed by a less soporific narration.

This was a voice which I felt did nothing to increase my interest,

I bought this because I love non fiction books especially those with a science base. The content is not too bad but a touch too lyrical for me, plenty of good information.

The real let down is the narrator, she is awful. Some narators can read the telephone book and make it sound interesting, this is quite the reverse.

the author is in love with the wind and melds science, history and philosophy with descriptive prose to show you why

If like me you are focused on Strategy, change and leadership then learning about the chaotic constant that is Wind, how it affects the world, life and the whole of humanity is essential reading.