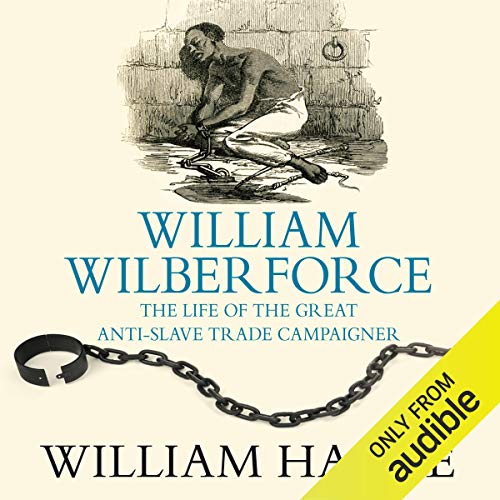 Hague shows how Wilberforce, after his agonising conversion to evangelical Christianity, was able to lead a powerful tide of opinion, as MP for Hull, against the slave trade, a process which was to take up to half a century to be fully realised. Indeed, he succeeded in rallying to his cause the support in the Commons Debates of some the finest orators in Parliament, having become one of the most respected speakers of those times.

Hague examines twenty three crucial years in British political life during which Wilberforce met characters as varied as Louis XVI and Marie Antoinette, Tsar Alexander of Russia, and the one year old future Queen Victoria who used to play at his feet. He was friend and confidant of Pitt, Spencer Perceval and George Canning. He saw these figures raised up or destroyed in twenty three years of war and revolution.

Hague presents us with a man who teemed with contradictions, making him a hugely criticised and at times hated figure among his peers. His behaviour and the ideas he upheld led William Cobbett to describe him as a consummate hypocrite. He was described by radicals as a supporter of repression at home, and although he took up a long list of humanitarian causes, on his home turf, he would show himself to be a firm supporter of the instincts, interests and conservatism of the Yorkshire freeholders who sent him to Parliament.

William Hague's masterful study of this remarkable and pivotal figure in British politics brings to life the great triumphs and shattering disappointments he experienced in his campaign against the slave trade, and show how immense economic, social and political forces came to join together under the tireless persistence of this unique man.

What listeners say about William Wilberforce

A well round, well read biography of Wilberforce

I enjoyed listening to the dynamic of how William did not put an end to the British slave trade single-handedly, yet keeping a clear thread through the narrative.

Worth it! I ended up buying BOOK too.

The narration is masterful. Always captivating. You will not want to stop listening.

The story is incredibly well written. The research and commentary on the life of William Wilberforce by Hague has made me come to value Wilberforce 100 times greater.

William Hague brings the historic detail to life with a passion for parliamentary politics. Wilberforce comes across as a man not just of stern conviction, but a warm character.

I did not just enjoy it, but was moved by it. While the story of slavery is horrible, the story of its conquest can bring joy to every human soul, and Wilberforce is a great man who deserves to be celebrated, because he helped to make the world a better place and the English a better people.

A long read, but never dull

I read this after seeing the film Amazing Grace, and was inspired by what I had seen. The film is not a patch on the book. It is really long but so worth it. In talking of Wilberforce one man said 'I saw a minnow become a whale'. It sums up well Wilberforce's great oratory ability. William Hague is a surprisingly good writer

Written with clarity and feeling

This book is written with great clarity and feeling. Wilberforce was charismatic and powerful character and William Hague manages to convey this with great sympathy and at the same time gives the historical setting sufficiently to understand the political environment of the time. The book is also very well read.

This book is so well written: well done William Hague. I can find no fault with it, I was interested from the first page until the last.

A hero, but a man of his time

A great sequel to Hague's biography of Pitt. The book gives you insight, not only into the slave trade, but into the politics of elections to, as swell as the workings of, Parliament in the early nineteenth century.
The book shows Wilberforce was far more than just the parliamentarian of astonishing persistence who did more than any other to abolish slavery. To modern eyes his support for the Corn laws and restrictions to civil liberties and workers rights are hard to reconcile with our image of him as a radical reformer. As does his belief in the absolute requirement of a belief in a Christian God for a person to have a moral compass. His independence of thought and action that he had as a back bencher was essential to his gathering of cross party support for abolition. But his disorganisation meant he would have been an awful minister, especially in a time of war.
So we are given a portrait of a great man, but a man of his time for all that

This is an excellent listen! It brings to life the huge character of this little, unassuming,but honourable and indomitable man.Of course his Christian faith is necessarily frequently referred to and we see a picture of the real man who battled for decades to see the barbaric cruelty of slavery abolished

Knowing little about William Wilberforce prior to listening to this audiobook, I am filled with admiration for a life well-lived. Thorough in detail, this book never lacks pace, or slips into a boring recitation of facts. William Hague is to be congratulated on this biography.

An inspiring and heart-warming epic.

William Hague's affectionate portrait of William Wilberforce was a delight from beginning to end. The story of Wilberforce's almost life-long campaign for the abolition of the slave trade is an epic tale of one man's strength of character, will, and devotion to a noble cause. Of particular interest to listeners who, like Wilberforce, are believers in the Lord Jesus, is the meticulous charting of Wilberforce's spiritual development and the blossoming of his evangelical Christian faith, as seen from his diaries and the testimony of his friends and enemies alike. Steve Hodson's narration enhanced my enjoyment of the book, adding an infusion feeling and warmth to the text, making one feel as though Hodson is relishing relating the life story of a personal friend. After finishing the book I certainly wished I had known Wilberforce in person.

An excellent book about an admirable man.

Very well written and researched with great insight into the life and times of Wilberforce. Narration brings the book well to life. Highly recommended.

An informative biography of a great man

I chose this book because I had enjoyed William Hague's excellent biography of William Pitt the Younger. I would rate that narrative a bit higher than the Wilberforce book mainly because of the amount of religious piety that has inevitably to be described to understand the man and his motivations. The final abolition of slavery is a lasting testament to his indefatigable campaigning against the terrible trade. I hadn't realized that it took most of his long parliamentary life to achieve this against diehard supporters of the inhumane practice. While most of the book is taken up with Wilberforce's involvement in promoting anti-slavery legislation, the author places this against the history of the time with wars in Europe and the crisis in the monarchy at the time of the accession of George IV and his battle with the wife he detested. That particular chapter is particularly lively.
I came away from the book feeling horror at the unspeakable cruelty to slaves torn from their homes in Africa starting with the nightmare sea voyage and the sheer hypocrisy of supporters of the trade who professed to be Christians.