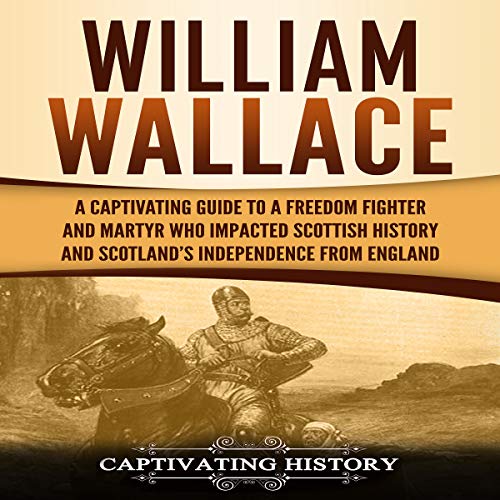 William Wallace: A Captivating Guide to a Freedom Fighter and Martyr Who Impacted Scottish History and Scotland’s Independence from England

You might recognize him from Mel Gibson's film Braveheart.

Sir William Wallace (c. 1270–1305) was - and is - a Scottish national icon of the highest order. Born as the landless younger son of a minor nobleman (Sir Malcolm Wallace), his startling rise to become a military and historical legend, an exemplary patriot, and a national hero is an embodiment of the underdog narrative that many people identify with in film and real life.

Wallace earned a place in history for his successful efforts in leading the Scottish resistance forces who had been rallying against English rule since Scotland was conquered in 1296.

Some of the topics covered in this book include:

So if you want to discover more about the life of William Wallace, buy this audiobook now!

What listeners say about William Wallace: A Captivating Guide to a Freedom Fighter and Martyr Who Impacted Scottish History and Scotland’s Independence from England

Our son is a dedicated fan of William Wallace so when we were in Scotland recently we visited Stirling Castle and this book brought the history of a common man who became a national hero.

Really if you are going to narrate things which relate to Scotland, you need to have enough connection with Scotland to understand how to pronounce names and places.

An interesting story ruined by a narrator who could not pronounce any of the place names correctly. This required frequent rewinding to try and work out where he was referring to. The Family names were also frequently mispronounced causing confusion. I almost gave up but, it was thankfully short.

The narrator does not know how to pronounce any of the Scottish place names, again and again almost every single name is wrong; Edinburgh, Glasgow, Roxburgh, Celtic, Berwick, Loch Lomond.

I think if you’re going to give an historical account via audio then its critical you get the pronunciations correct. The book was narrated by an American who just didn’t get some pronunciations wrong he got them all wrong and I mean all the towns and places which you would feel is very important when telling a story about history and a pivotal moment in Scottish heritage .. very very disappointing narration


It has some good explanations. I like the action too.
it was interesting nice to see it form another persons perspective.

So if you are looking for Brave heart, go elsewhere. If you want a very good look at his origins and the period, and all that is actually known about him, this is a great resource.

Very interesting book on the myth and history of William Wallace. Excellent detail and research concerning the tales of the legend.


Short and to the point, lots of excellent information and history. Great book to start research on William Wallace and what he tried to do for Scotland.

An overview of the life of William Wallace, a hysterical figure. A person would have to be a scholar to dig any deeper into his life. Well done.