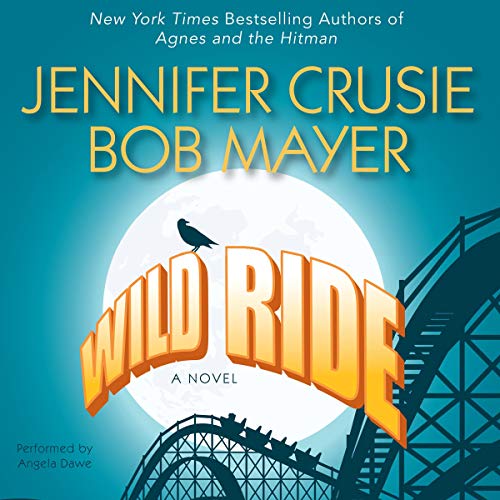 Mary Alice Brannigan doesn’t believe in the supernatural. Nor does she expect to find that Dreamland, the decaying amusement park she’s been hired to restore, is a prison for the five Untouchables, the most powerful demons in the history of the world. Plus, there’s a guy she’s falling hard for, and there’s something about him that’s not quite right.

But rocky romances and demented demons aren’t the only problems in Dreamland: Mab’s also coping with a crooked politician, a supernatural raven, a secret government agency, an inexperienced sorceress, an unsettling inheritance, and some mind-boggling revelations from her past.

As her personal demons wreck her newfound relationship, and real demons wreck the park, Mab faces down immortal evil and discovers what everybody who’s ever been to an amusement park knows: The end of the ride is always the wildest.

What listeners say about Wild Ride

Jennifer Crusie and Bob Mayer are great together -the characters are quirky and interesting, the action is exciting and the storyline is always the unexpected, but Crusie just can't pull off the paranormal storylines. This is just like Dogs and Goddesses and The Unfortuate Miss Fortunes. Stick to real people with extraordinary circumstances (Like Agnes and the Hitman and Bet me -they were fantastic!)

When I first began to listen, I didn't think I'd like the narrator's voices, but by the time I'd listened to a couple of chapters, I was beginning to like them, and by the end, I was very impressed. I also enjoyed the storyline, crazy as it was, and thought the characters were interesting and well-developed. In fact, I listened to it twice, because I thought I hadn't quite appreciated it enough the first time. Well worth listening to, if you like Jennifer Crusie and fantasy (I loved Dogs and Goddesses and Agnes and the Hitman, so that may give you a clue as to my tastes!)

Good plot, not so good characters

I normally love Crusie and Mayer writing together. This time just didn't sit right with me. It's as if they put so much into the plot and not enough into the characters. I just couldn't like them. The male lead was a drunk having a huge pity party. Even after he sobered up he didn't become likable. I never did figure out the female lead's problem and why she slept around but came off as anti-social with everyone. The other characters were so one-dimensional that I just didn't care about them. Not even when some of them died.
The idea of the "untouchable" demons trapped in an amusement park and a group of employees also trapped working at the amusement park to make sure the demons stayed trapped was engrossing. That's the only thing that kept me listening when I disliked the characters so much.

I am usually a fan of Crusie and I loved, until Wild Ride, the combined writing of Mayer and Crusie. This book is similar in style to Gods and Goddesses, and I came away from the story with the same unsatisfied reaction. I believe that Crusie should NOT try to write the paranormal. It is a popular genre that authors like Harrison and Harris do spectacularly well with quirky characters and humor. Crusie makes demons and magical beings in general seem like funky wannabees, rather than the ruthless, cunning, but lovable characters we have all grown to enjoy in the paranormal genre. This is not a bad book, but it is not a great one either. Read Welcome to Temptation, if you haven't already, for a more gratifying read.

A food court of entertainment

This book is 3.5 stars, not 4 but not really 3. I really liked the premise. It reminded me a lot of Carousel Tides by Sharon Lee which I liked better. I think the problem was that I was expecting more of "Bet Me" type silly and funny conversation and situation. This book takes more serious guise as an urban fantasy but unfortunately not quite in the level of Carousel Tides.

As far as the book goes it was an entertaining book with great ideas. It had everything from romance, fantasy and adventure like a food courte but not enough for a speciality restaurant. So 3.5 stars.

This needs to become a movie

Angela Dawe is one of the best female narrators I've heard to date. This combined with Mayer and Crusie's story is pure pleasure that would give Strphen King a run for his money. Dialogue with the demons at the end became a little cheesy but overall this was an amazing book

Usually Crusie is hit or miss for me and I usually don’t do the supernatural romance but this one was just right. Narrator did a great job of bringing the varied and unusual characters to life. If you like the unusual, the unexpected, and delightfully different characters and plot, then Wild Ride might be right up your alley.

A fun, twisty story that I couldn’t put down. So much fun I laughed out loud & even gasped a couple of times. Would recommend to anyone.

This is one of my "go to, feel good" books. The performance was exceent. I thought the voices matched the characters beautifully. Highly recommend this audio book.

Loved it! Love this author's work and own as many as I can. Performance was great, too. Only wish there was more!

Slow start but once I got into it...WOW. One of the best stories I have ever heard. I always thought MAB & Ethan would get together but the writers did a better job than I would. Really good story. Creepy voices which freaked me out but all in context.

A theme park is the holding place for demons and various workers in the park are the Guardians who have to keep them locked up to stop armageddon.

Good fun, but Crusie is better when she writes on her own.

really enjoyed this book Have listened more than once each time enjoy it more.