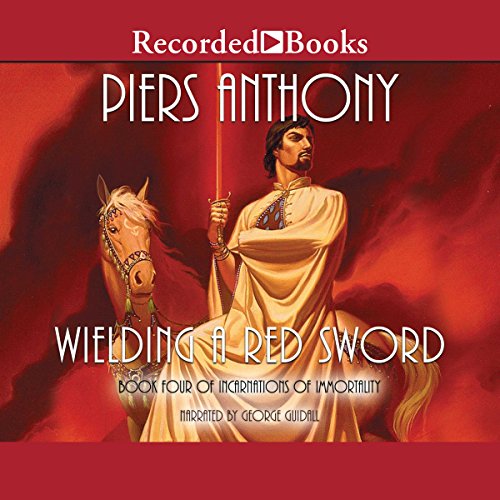 Legendary science-fiction/fantasy writer Piers Anthony combines fascinating magic with a gripping struggle between good and evil in this most ambitious series. As with the series' other stand-alone novels, Wielding a Red Sword depicts a mere mortal who is called to serve as a god-like incarnation. It is the thrilling story of Mym, an Indian prince who takes up the Red Sword to become Mars, the Incarnation of War.

To avoid breaking his betrothal to the princess Rapture and the war that would surely result, Mym accepts the fearsome office. As Mars, he plans to keep Rapture by his side as he stops the suffering caused by Earth's incessant wars. But will Mym's princely training, even his abilities as a berserker, be enough to defeat Satan himself?

Piers Anthony weaves together adventure, romance, and Eastern and Western mythologies to create this charming allegory. Master narrator George Guidall delivers the elegant tale with a dignified tone and much dramatic flair.

What listeners say about Wielding a Red Sword

Leaving that off I feel like I'm missing a significant portion of the book.

The first three books in this series had the "Author's Note" narrated at the end. They provided a very welcome insight into Piers Anthony's life and writing. When listening to the last chapter of the book, I was looking forward to the "Author's Note". I cannot express my disappointment to have this omitted from the Audible production. Yes, I have the paperbacks and can read it, but I just felt I was lacking something at the end of the Audible book.

The fourth novel of the Incarnations series tells the story of Mym, a young Indian prince. As the story opens, Mym has fled his father's cort, believing himself unfit for his station due to a severe stutter and the presence of his more desirable brother. To make ends meet, he joins a traveling circus where he meets Orb, a beautiful young woman with a unique gift, the ability to put people into a trance whenever she sings and plays her harp. With the aid of his magic ring Mym aproaches Orb and soon forms a connection with her. As time goest by the two fal in love, but Mym is soon discovered and take back to his fathher. His brother is dead, meaning that Mym must become Raja uponhis fathher's death. Mym refuses to accede to the arranged marriage, resulting in the deaths of several would-be brides. Finall his father arranges for him to spend a month with Princess Rapture of Malachite at the Honeymoon Castle, a castle with magical properties that leave the thoughts of those who reside within the grounds open to one another. As time goes by Mym discovers that Rapture is indeed worth loving and finally agrees to marry her. Before the wedding can take place, the Raja changes his mind and begins to arrange a different marriage for Mym. This results in Rapture's father declaring war on Mym's kingdom, greatly angering both Mym and Rapture. Mym's anger draws a strange red sword to him, which e takes only to learn from Gaea, Incarnation of Nature, that he is now Mars, Incarnation of War and that it is now his mission to foil the plots of Satan, Incarnation of Evil. Mym has trouble wit this concept, having come from a completely different belief system. It's not long before Satan approaches Mym, and only time will tell whether Mym will have the necessary quickness of mind to avoid falling prey to Satan's insidious plots.
All in all this is an excellent book and George Guidall does a fine job of bringing it to life. It's unfortunate that he doesn't narrate the next three books in the series.

i wish the author's note were included.

Author's note is included in the previous three books in the series. This book is missing that.

one of my all time favourite series

I've read this series several times. this is the first time I've listened to it. I love it. It adds a new dimension

As great a story as Pale Horse, but completely different! Funny, bittersweet, and brilliant!

I enjoyed the Incarnations of Immortality series immensely when I was a teen. I found the post logged or writer’s notes most entertaining then and was sad to see that it was not included in this performance.

wish they had a forward or afterward for this one

this one tends to be a little bit more verbose but it is in line with the entire incarnation of immortality series which is to say excellent. it explores different aspects of religion and was an early review and affirmation of my viewpoint that there was more to Heaven and Earth then what I knew for sure. look at how many of us humans tend to look at things in so many ways each believing that we are correct or leaving our options open

Great story after On A Pale Horse.

We want A Spell For Chameleon also!! Great and political as Piers Anthony gets. Fun concept. I will read more.

A good story, but it's missing the author's note.

Second only to Death

Another great book in the series. My only complaint is the lack of author's note.