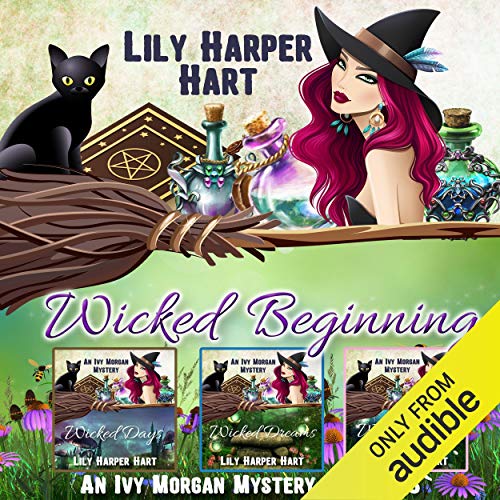 Ivy Morgan is a witch with a mind of her own. What she doesn't need is romantic entanglements. That's why Jack Harker's appearance in her life is such a conundrum.

Jack Harker has a haunted past and all he wants is peace and quiet. He's left a life of violence and despair behind for the comforts of home and country. He might find peace in Ivy's presence, but he'll never find quiet.

Ivy and Jack are on a crash course for love, but they also have murder and mayhem in their way.

The whiny voice of the narrator made the story annoying. I know the point of the story was that the couple like to argue, but some of the arguing just didn't make sense. if Ivy Morgan is that whiny I don't think I'll listen to her anymore.

It took 45 minutes for me to acclimatize to the narrator. Her whinny voice was so bad I almost returned the book. The stories were pretty good. I can't believe I made it through all three.

I don't know what age group these books were intended for but they are stupid. The narrator is very hard to listen to, she has the worst voice ever. It's like listening to someone run there nails along a chalkboard. the author's over use of the word non-pulsed and the bad use of "honey", leads me to believe she doesn't have command of the English language, or has never heard of a thesaurus. The repetitive nature of the books overall is not entertainment, it is torture. How it ever got published is beyond me. At times I wonder if the author has a very twisted idea of love and romance as it seems like she is not familiar with how relationships should be.

The story was OK but the performance was very poor. The voices were robotic and monotone.

The lack of skill from the narrator kills this set. I found it difficult to stay interested in this series because of the narrative, she is unable to successfully carry off multiple voices with any type of effectiveness, and emotion

How do I get my money back?

I have never wanted my money back on an audible book so bad before! The narration of this story was so hard to follow. The narrator does not have enough range in their voice to sustain a book with more than 2 characters. Other than the narration of the store the characters sounded like they were having a hard time with the cue cards they were supposed to be reading. (very robotic) When there was a conflict with any characters the raised voices just turned into high pitched screaming and just made it so hard to push through the story. Might have been better to read these stories the old fashioned way... With my eyeballs!

Do not spend your money

What would have made Wicked Beginning better?

The story might've been good but..The narrator totally ruined the book. I could not give it a chance after listening to it for 30 minutes I had to return it

Has Wicked Beginning turned you off from other books in this genre?

Would you be willing to try another one of Angel Clark’s performances?

Good price for the first 3 books

I adore the character development of the Ivy Morgan series but detest the performance by Angel Clark. There are periods of time when her voice shrieks so badly that you have to turn down the volume.

But, in saying that, I keep on going back to listen to the series. That is how you know the writing and character development is good, now we just need to remove the narrator.

Bad naration is a big distraction

Would you try another book from Lily Harper Hart and/or Angel Clark?

Yes from the author. No from the narrator.

I read the first book in the series and I'd give it a solid B. I thought it would make a good audiobook to listen to at work because I could listen with half my brain and not lose track of the plot.

I read the other reviews criticizing the narrator, but I thought I would get used to it. Some parts sound okay, but for some of the male dialouge she reminds me of how one might speak to a mostly deaf elderly relative-- loud and staccato. It is jarring after her &quot;normal&quot; voice-- almost worse than if she used the annoying voice for the whole thing.

Could you see Wicked Beginning being made into a movie or a TV series? Who should the stars be?

Definitely not a win.

Narration was awful. The male voices were jarring, one dimensional and irritating. The lead female voice was a constant shrill shriek.

Would you try another book written by Lily Harper Hart or narrated by Angel Clark?

Have you listened to any of Angel Clark’s other performances? How does this one compare?

Angel Clarke seems to be a consistently good narrator, judging by the other series I've listened to which she has narrated.

If you could play editor, what scene or scenes would you have cut from Wicked Beginning?

The scenes I would cut are the ones where the supposedly strong-willed Ivy allows the obsessive and controlling Jack to walk all over her - for example, the occasions when he refuses to leave her house (knowing he's bigger and stronger than she is so she can't physically eject him) and she does nothing to prevent him from getting away with it.

Sadly these books have a consistent thread of a supposedly strong woman allowing a controlling man, who is obsessing over her, to walk all over her. He spies on her, stalks her, openly follows her, and refuses to leave her house, Beyond making a few token verbal objections, she does NOTHING to stop him. She even stops her brother from beating him up and prevents him from throwing this man out of her house!

And it's all written as if this "relationship" is meant to be a Good Thing for her. Her relatives encourage it, apparently because having a contolling obsessive for a boyfriend is better than not having a man in your life...!!!

I couldn't continue to listen to it.

I didn't finish the third book because I could see that, despite his abandoning her when she'd been shot, accosting her in the woods, following her home and forcing his way inside, and then climbing into her bed while she was drugged to insensibility, she was going to take him back and continue to allow him to be controlling and dictatorial toward her.

This author seems to have peculiar ideas about what constitutes a good relationship and to what a woman should allow a controlling partner to do to her.

Would you try another book written by Lily Harper Hart or narrated by Angel Clark?

Would you ever listen to anything by Lily Harper Hart again?

If you could play editor, what scene or scenes would you have cut from Wicked Beginning?

Every scene where Ivy and Jack interacts! My God, this was bad! Really bad! How on earth can this whiny thirteen year old egocentric girl (I know she's older but it's hard to see) and this totally incompetent male police man who sounds like a thirteen year old boy even... Oh, so bad!

I didn't have very high hopes for this book but I was willing to try it for some light reading. It was really bad. It's supposed to be about two adults and they are sooo silly, like unmature teenagers and they just keeps on whining! The characters are unintresting and the story is unlikely and not very intresting at all, which if the charachters was some people you did want to read about doesn matter, but now it's so obvious. I will never read another book by Lily Harper Hart nad I don't think I will listen to a book narreted by Angel Clark either. Her very hig pitched voice really emphazises the whining.