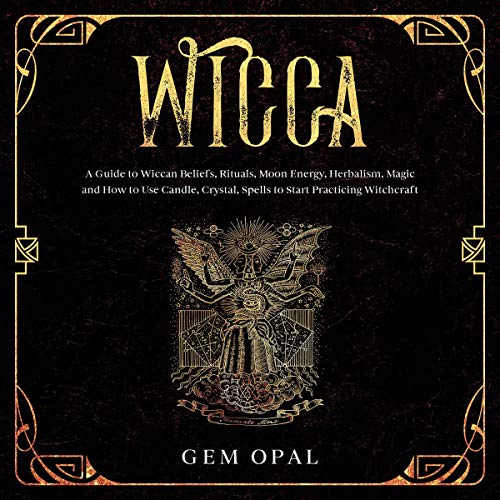 The Wicca is the fastest growing religious, especially among women. It is estimated that there are almost five million practitioners all over the world.

But what exactly is the Wicca? What is hidden behind the nebula of paganism, feminism, New Age and ecology in which this extraordinary spiritual practice is usually forced? Why do women, in particular, find the right answers to their thirst for knowledge and commitment there? The members of the Wicca say they want to restore the cult of fertility, dating back even to the Neolithic.

The Wicca is defined as the "religion of nature" or "old religion", and its principles are based on the cult of nature and the cycles that belong to it.

The veneration of the faithful of the Wicca is addressed to what is part of the being of every man (what is immanent), metaphysical philosophical concept to be sought in every element of the world. The divine is revealed in the universe in infinite forms, sometimes feminine, identified with the Goddess, sometimes masculine, traceable to God: two fundamental principles that complement each other, in perfect symmetrical harmony.

In this regard, an element of great "innovation" of this religion is the return to the veneration of a female divinity, an aspect abandoned for centuries, not only by the great monotheistic religions.

According to this religion, one cannot believe in anything that is outside the natural (defined as supernatural), but only in one's own personal ethics, one's own desires, one's own abilities. The divine is in every human being, it is enough only to be able to see it, know it and understand it.

All this requires a certain assiduity in the rituals, important from the moment of initiation to their daily practice.

A lot of books deal with “WICCA” in a superficial manner, they don’t give to the reader what he wants. Instead, Wicca for Beginners is based on the study and practice of “Amber Crystal” and it tries to give everything you need to become a Wicca.

Even if you think to know all about Wicca, "Amber Crystal" will make you change your mind.

What are you waiting for? Get this audiobook now.

What listeners say about Wicca

The perfect audio-book for the beginner!

I first listened to this audio-book over a decade ago when I came across a copy of a big blue audio-book. I needed something that was easy to listen to, with clear descriptions and explanations.

This will be a guide for a long time to come, both organized and approachable. Will recommend it to any curious people.

Strongly recommended for anyone looking for info!!

I totally love it! I'm so glad that I received this audio-book. So Strongly recommended for anyone looking for info!!

I would like to say this is a really super good audiobook for beginners and well-seasoned practitioners of magic.

Excellent audio book for beginners who are seeking more information on Wicca. It was very informative and lead me to buy more audio books to further my never ending journey into paganism.

You are free to believe

I enjoyed listening this and finding there are no set rules or ways to live by, other than to harm no one. You are free to believe as your heart and intuitions lead you.

Both informative and helpful

The author presents the material in a friendly, welcoming and easy to listen format that was extremely enjoyable to listen.

A very brief overview of Wicca

A very brief overview of Wicca. This audio book can easily be listen in one sitting. It offers a quick look into Wicca, its celebrations and rituals.

I've been wanting to know about Wicca and this audio book is a very good starter kit. Perfect for people with little to no knowledge of Wicca looking to learn more.

Easy to follow and understand. Perfect for beginner Wiccans and a great addition to any witchcraft collection.

If you're wondering where you're at with Wicca, or what it's like, listen this audio-book. It's going to help you understand what knowledge you need to continue your journey with Wicca.

A nifty little audio book! Precise & useful. A great addition to any metaphysical library. And small/thin enough to take with you if you need.

I love this audio book a shows simple spells and I can work with it through my magi and this author have terribly misrepresented my faith.

I found this a very amazing audio book that helped me to realize my thinking and feelings I've had for as long as I can remember.

This is a perfect audio book for everyone

It explains everything about Wicca that a beginner needs to know. This audio book is a perfect listen for you.

This audible is absolutely amazing

This audible is absolutely amazing and life changing. I feel like I've found a path that I've been fumbling to find all my life and I sincerely thank the author for her amazing work. It is like the beginner's audible to all things mystical. And it's the best beginner's guide to anything I've ever read so far.

This audible provides an insightful introduction

This audible provides an insightful introduction to Wicca that is as intriguing as it is engaging. I'm inspired to explore the subject further, and am excited about the journey ahead.