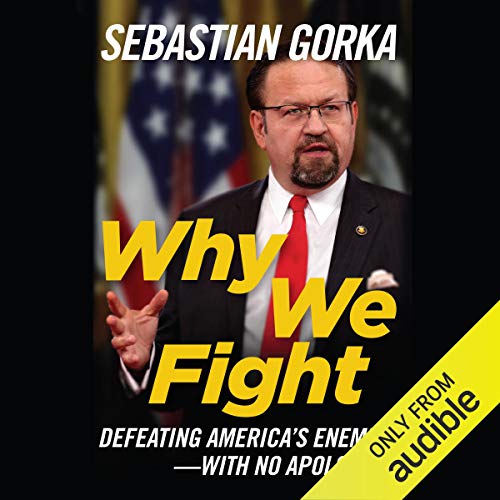 WAR. It will happen again. We must be ready.

Sober words from Dr. Sebastian Gorka, a man who has made the unvarnished truth his specialty. And there’s one eternal truth that Americans are in danger of forgetting: the most important weapon in any geopolitical conflict is the will to win.

And we must win.

In this powerful manifesto, Dr. Gorka explains the basic principles that have guided strategists since Sun Tzu penned The Art of War in the sixth century BC. To defeat your enemy, you must know him. But that’s the last thing liberal elites are interested in. Willful ignorance about our adversary - whether it’s Russia, China, or the global jihadi movement - has been crippling. Tearing off America’s politically correct blindfold, Dr. Gorka clarifies who our foes are and what makes them tick.

An eight-year vacation from geopolitical reality under Obama left our country dangerously weakened. Dr. Gorka addresses the pressing questions we face as we rebuild under President Trump’s leadership:

All the money and weapons in the world cannot substitute for the will to fight for our precious country and what she represents. To remind us of what the will to win looks like, Dr. Gorka intersperses the stories of four American heroes - Stephen Decatur, Chesty Puller, “Red” McDaniel, and a warrior who never took up arms, Whittaker Chambers - men who believed in their country and put everything on the line for her.

What listeners say about Why We Fight

I expected more of Dr. Gorka

I am a big fan of Dr. Gorka but the book fell flat with me having too few parts where it seemed he was writing a book as opposed to phoning it in to check off a book as a way to make money. Too many stories felt more as filler than substance and I have listened to Dr. Gorka enough to know he is much better than this.

If I wanted to listen to a podcast I would gladly have done so but listening to Dr. Gorka read both parts was not enjoyable. You would be much better served simply going to The Rubin report and listening/watching the interview as it is much better.

I do appreciate Dr. Gorkas work and will consider future works by him I just hope he puts in more effort next time to give us some meat on the bones and educate us instead of writing a infomercial for others work. I am happy to support Dr. Gorka's work but Books may not be his strong suit.

great subject and material presented in an easy to digest format from an extremely qualified source.

One of the very best books ever, this is a MUST READ. Very well explained and his articulation is remarkable

This is one of the best book I have read explaining and dissecting the Jihadis movement and the historical origins of it. The book is so through about the issues that have created the current hostilities between the extremists muslims and the western culture. I wish it had gone a bit more in depth about 1979 Iranian revolution that was only caused by the incompetences of Carter Administration leading to the Soviets invasions of Afghanistan and rising of the mujaheddins in Afghanistan which the west supported their fight with the Soviets. By removing the Shah, the staunchest ally of Israel in the region at the time, the region became unstable.

Nevertheless, I am probably going to re read this book again since there is so much information crammed into it that it’s hard to absorb it it all in one reading. I will also read the other book of Dr Gorka hoping that it is as informative as this one.

Thanks Dr Gorka we need more immigrants like you who become proud Americans and not those who come here and want to recreate their home country and culture in America.

if you have concerns about which way to vote this November read this book.

I have seen Dr. Gorka on television over the last couple of years and started realizing how much I agreed with his analysis.

Dr G is an immigrant that knows more about America than 99% of natural citizens. He also seems to care more about protecting this country than the same 99%. Thank you, Sir.

I began listening today. I'm enjoying his family stories, all told in Sebastian's rich deep voice. His narration is exceptional.

This Man Is A Genius

Dr. Gorka is the most articulate man I know of. He is a genius when it comes to his description of the first part of President Trump's presidency. Every minute of his book gave me a better understanding of not only President Trump, but how the world views the United States. How you know of Dr. Gorka on television is how you will find him while listening to his great stories!

If you want to understand your enemy and what you are facing in this country, read or listen to this book.

Dr. G explains how terrorist attacks are now the most common type of warfare and how we must prepare defensively for this reality.