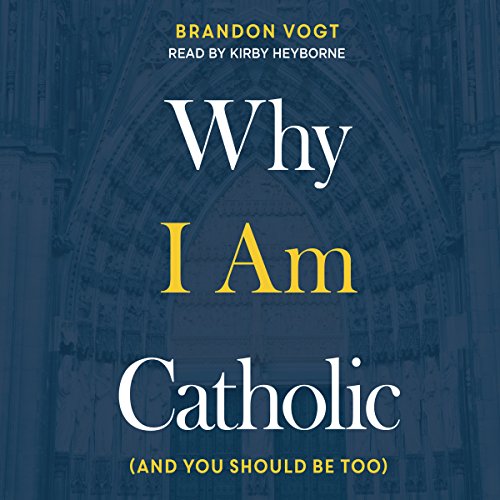 Why I Am Catholic

With atheism on the rise and millions tossing off religion, why would anyone consider the Catholic Church?

Brandon Vogt, a best-selling author and the content director for Bishop Robert Barron’s Word on Fire Catholic Ministries, shares his passionate search for truth, a journey that culminated in the realization that Catholicism was right about a lot of things, maybe even everything. His persuasive case for the faith reveals a vision of Catholicism that has answers our world desperately needs and reminds those already in the Church what they love about it.

A 2016 study by the Public Religion Research Institute found that 25 percent of adults (39 percent of young adults) describe themselves as unaffiliated with any religion. Millions of these so-called “nones” have fled organized religion and many more have rejected God altogether. Brandon Vogt was one of those nones. When he converted to Catholicism in college, he knew how confusing that decision was to many of his friends and family. But he also knew that the evidence he discovered pointed to one conclusion: Catholicism is true. To his delight, he discovered it was also exceedingly good and beautiful.

Why I Am Catholic traces Vogt’s spiritual journey, making a refreshing, 21st-century case for the faith and answering questions being asked by agnostics, nones, and atheists, the audience for his popular website StrangeNotions.com, where Catholics and atheists dialogue. With references to Catholic thinkers such as G. K. Chesterton, Ven. Fulton Sheen, St. Teresa of Calcutta, and Bishop Robert Barron, Vogt draws together lines of evidence to help seekers discover why they should be Catholic as an alternative.

Why I Am Catholic serves as a compelling reproposal of the Church for former Catholics, a persuasive argument for truth and beauty to those who have become jaded and disenchanted with religion, and at the same time offers practicing Catholics a much-needed dose of confidence and clarity to affirm their faith against an increasingly skeptical culture.

What listeners say about Why I Am Catholic

Stories and bible references are a gentle read on why he became Catholic and what events and history persuaded him it was the correct religion.

Beautiful explanation of being Catholic in a simple and straightforward, but true and convincing way.

A must-read for teens and young adults!

This book is amazing. I am a 31 yr old long-time Catholic who just loves to enrich and deepen my faith and understanding of the Church. This book is written in a way that I think would be so helpful for young adults these days, especially those who are unsure of what they believe. I recommended the book to a Catholic high school teacher friend and others with growing children. How important it is to ensure young people get THIS message, especially in a world that is throwing so many other mixed and confusing messages at them!

Change your world and change the world. When you truly begin to understand the Catholic Church, you see the beauty, the grace and the possibilities. Great read!

Best Catholic information book I have ever read!!

Most excellent source of Catholic faith information written in a welcoming and loving way! A Must Read for any Catholic and for those who want to know what we believe!!!

One of the best Catholic overviews

Although not exhaustive-that would be overwhelming- it tees up many of the objections and concerns young people have. I believe that if they are honestly seeking truth this book will lead them to wanting to discover more truth, good and beauty within the Catholic Church. You want to be counter cultural...be Catholic.

This book helped me distinguish myth from fact regarding the Catholic Church, and its practices. I highly recommend it to anyone wanting to know more about the Catholic faith.

This book is amazingly profound and I thank God for and Brandon Vogt for it.

great summary of the catholic faith

This is a good resource for those that are looking at joining the catholic church.

I'm an Orthodox Christian, but the Catholics are much closer to us than the Protestants. This was a profound and persuasive book that gave me hope for the Catholic Church. I pray that the Catholic Church can bounce back from the huge challenges they've faced over the past few decades including losing 6 members for every 1 new member of the church. Brandon Vogt, host of Word of Fire, is a brilliant, young, exciting voice who gives me hope that this incredibly important branch of Christianity can have a revival and once again grow in the West. This is one of the best books on religion that I've ever read!

I loved the way Brandon talks to the reader as if he's a lapsed Catholic who needs some guidance in returning to the Church and working through his doubts about the faith. As someone who was a lapsed Orthodox Christian for many years, I found the book's approach very persuasive. Lapsed Catholics should be the intended audience since there are several million lapsed Catholics and I doubt that many of them have found the "freedom" and fulfillment they were seeking in drifting away from the Church. Brandon makes very compelling arguments and he backs them up with lots of facts and history. This author really knows Catholicism and he understands very well why Catholicism, and Christianity as a whole, have lost their appeal to so many in today's culture.

I can't recommend this book enough. The West needs books like this and heroic people like the author and his mentor, Bishop Barron. Buy this book and save your soul, save your culture, and save the West!

A good start for those considering, a warm reminder for the distant and practicing

Vogt writes the book in a straightforward and concise easy read, organizing it into three statement like answers to the title; Catholicism is true, Catholicism is good and Catholicism is beautiful, the subsections of which give the reader both scientific and historical evidences together with brief peeks into Vogt’s findings and journey from Protestantarianism to Catholicism in his university years. Vogt manages to both dispel myths around Catholicism with a freshness opposite to the stereotypically preachy, judgemental and oftentimes archaic catholic narrative and re-ignites a passion for the returning Catholic. Disappointingly, and to be fair, understandably Vogt fails to adequately address some of the main objections to Catholicism, namely homosexuality, paedophilia, the role of women to name a few; but rather uncomfortably and lightly glosses over the issues. The result, a good start for those considering, a warm reminder for the distant and practicing Catholic but falls a little short for the pessimist.

As a recent adult Catholic convert, this book is just what I needed to hear. Having completed RCIA in 2019 I decided to convert to the Catholic Faith after many years of wavering., many reasons for which are stated in this book. This book has helped me better understand my reasons and motivations to become Catholic. it will be re-read quite a lot I think, as it is onee of the most helpfull and encouraging books on Catholicism.

Well written and persuasive introduction to Christianity and Catholicism. Narration good, holds attention.
Recommended to anyone.