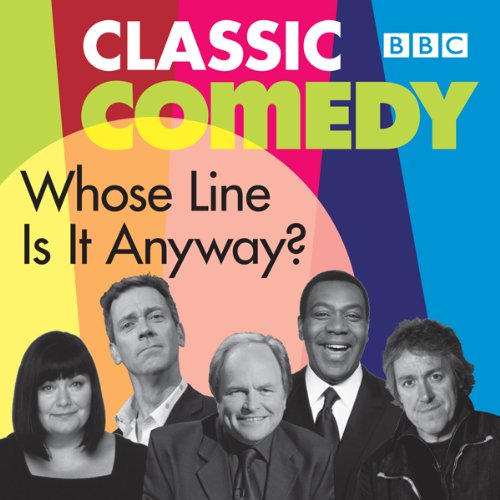 Whose Line Is It Anyway?

Stephen Fry, Hugh Laurie, Lenny Henry, Griff Rhys Jones and Dawn French, with host Clive Anderson, star in the improvisation radio show that spawned the TV phenomenon. Based on comedy suggestions from the studio audience, this is ad-libbed comedy at its best.

Regulars Stephen Fry and John Sessions are joined by Lenny Henry, Dawn French, Hugh Laurie, Enn Reitel, Griff Rhys Jones, Kate Robbins, Rory Bremner and Jon Glover as they battle their way through a succession of games and romp through a world of literary styles, TV theme tunes, and film genres. Chairman Clive Anderson desperately tries to hold the whole thing together and the guests make it up as they go along in this riot of improvisation, which is often funnier than many scripted shows.

What listeners say about Whose Line Is It Anyway?

Enjoyed this very much. I'd heard these programs on BBC Radio 4Extra and thoroughly enjoyed the series. Unfortunately, this contains only 4 of the 6 programs in the series, and the program I enjoyed the most isn't here. But that's okay - Dawn French, Lenny Henry, Hugh Laurie, John Sessions, and of course the incomparable Stephen Fry (even if he can't rap to save his soul), are all there to enjoy.

If you could sum up Whose Line Is It Anyway? in three words, what would they be?

Hugh Laurie's dry and sarcastic sense of humour has always been my favourite.

Would you listen to another book narrated by Clive Anderson?

Likely not. His presentation is very deadpan, which works for this show, but not for much else.

Yeah, "Improvising a Rap" made me move a bit. LOL

If you're looking for the same off-the-wall improv comedy seen in the Drew Carey and Aisha Tyler versions of "Whose Line" on American TV, this is not for you - the similarities stop at the concept of actors playing improv games. If, however, you appreciate British humour from the 1990s and don't mind the subpar recording quality, this is a very enjoyable showcase of acting talent, and a cool glimpse into the early days (essentially an extended pilot) for a television classic.