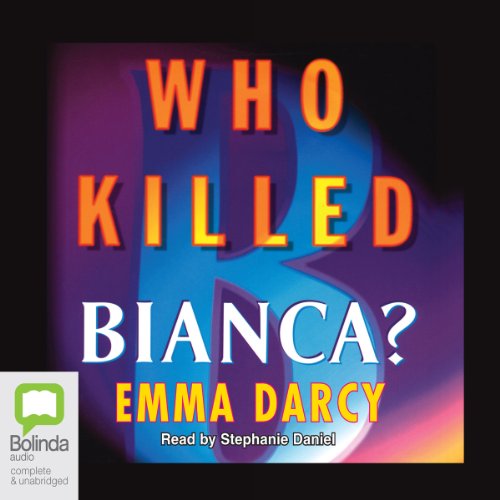 Winner of the 2002 Ned Kelly award for crime fiction, Emma Darcy's suspense-filled Who Killed Bianca? tips its hat to Agatha Christie's Murder on the Orient Express in this modern whodunit set on board Australia's famous Ghan train bound for the Outback.

Stephanie Daniel ratchets up the tension with her animated, energetic performance, and keeps the listener guessing until the last chapter as romance novelist K. C. Gordon takes it upon herself to expose which of the eight suspects, all members of Australian high society with plenty of skeletons in their closet, had enough of a motive to murder a divisive gossip columnist.

From the author of 80 internationally successful romances comes a Golden Age mystery in the tradition of Agatha Christie.

Bianca Bernini did not foresee she would inspire her own murder when she boarded the legendary Ghan for the two-day train trip from Sydney to Alice Springs. As the most read, most listened to gossip columnist in Australia, she was revelling in her power to ruin the lives of eight other passengers, eight highly placed, privileged people, who were determined on hiding their secrets at any cost. What would they pay to stop the public revelations she could and would make? For K.C. Gordon, successful romance novelist, travelling is a way of recharging her batteries: meeting new people, seeing new places, embracing new experiences. Wanting to set her next story in the Australian outback, she starts off her trip on The Ghan hoping some of the passengers will provide inspiration for new characters. Within an hour of the train leaving platform one, she is reluctantly drawn into the web Bianca is weaving around her victims. But the web is already spun. K.C. is once more caught up in the inescapable threads of murder as a prime witness.

What listeners say about Who Killed Bianca?

Murder on the Ghan Express

What a delightful find! The characters are devine, the setting exotic and the mystery obscure! Join KC Gordon on a trip to Australia's heartland on a famous train and learn a little about this wonderful country in the process! I'm happy that Audible has both her other KC Gordon books ("Who Killed Angelique" and "Who Killed Camilla") and they will be my next 'listens'.

Ms. Darcy seems to have made a successful transition from romance writer, even though KC Gordon (the protagonist) is one. I personally could have done without the short and not particularly graphic sex scenes, but they do further character development. There is also very minimal use of the 'f' and other 'cuss' words (again, appropriately used and not liberally sprinkled for effect) so you might not want to listen when small children are present.

These are minor drawbacks to an excellent mystery and the narrator is very good. You'll hate Bianca, and have a wonderful time discovering who killed her. Enjoy!

I enjoyed this fun mystery with interesting although decidedly unreal characters. These are not people you'd expect to run into at your local Piggly Wiggly (and be grateful for that!). The romance writer turned mystery writer is a delightful addition to the detective genre and this type of mystery is not written well at all anymore. Glad to see there are other novels available.

Would you consider the audio edition of Who Killed Bianca? to be better than the print version?

Have not read the print version

very good descriptions of people and places. Makes you want to do the same trip. Ms Daniel does a superb job with the narration of all the different characters. Don't you just hate Bianca?

yes ~ but it would give the plot away

I found it difficult to emphasise with any of the characters including the 'heroine' KC. The sex descriptions were unecessary and the end was wrapped up unsatisfactorily.