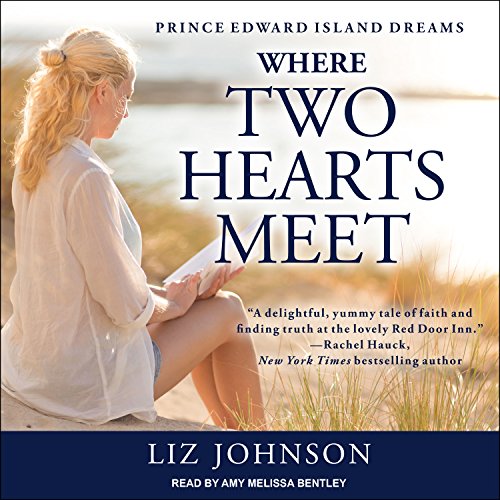 In her kitchen at the Red Door Inn, executive chef Caden Holt is calm, collected, and competent. But when her boss asks her to show off their beautiful island to impress a visiting travel writer and save the inn, Caden is forced to face a world much bigger than her kitchen - and a man who makes her wish she was beautiful.

Journalist Adam Jacobs is on a forced sabbatical on Prince Edward Island. He's also on assignment to uncover a story. Instead he's falling in love with the island's red shores and Caden's sweets.

When Caden discovers Adam isn't who she thought he was, she realizes that the article he's writing could do more than ruin the inn's chances for survival - it might also break her heart.

What listeners say about Where Two Hearts Meet

Sweet story that will make you crave cinnamon rolls!

I loved this book and enjoyed it more than the first in this series. I really related to Caden in so many ways. Loved how this book picked up so well from the first and the characters were so well developed. However, I am really craving a cinnamon roll now! The narrator was fantastic. Did a great job with acting out all of the characters and their accents. Looking forward to the next book in the series.

I listened to this and the first book. Story was okay. Location was nice. Most memorable thing about both books was the way the main character's stomachs twisted, lurched, fell, rose, clinched, felt sick , even took flight. Every emotion seemed to center around their seemingly delicate stomachs. Not interested in reading the third book.

Enjoyed the first book in the series and was not disappointed in this one. I didn’t understand why this girl had no self confidence but the end result was positive despite that. I was irritated by the narrator using a “southern twang” and found it distracted greatly from the performance.

The story had just enough interest to keep me reading "just one more chapter." I love a story that has characters who are true to life. The mute vagabond boy was the best vehicle to bring the two main characters together!

Wonderful! As good or better than first book!

Loved the storyline as it blossomed into even better story with lives intertwined and the character of the shy, unassuming best friend steps up and carries the load in many ways. Great expectations as I anticipate the third book in the series! :)