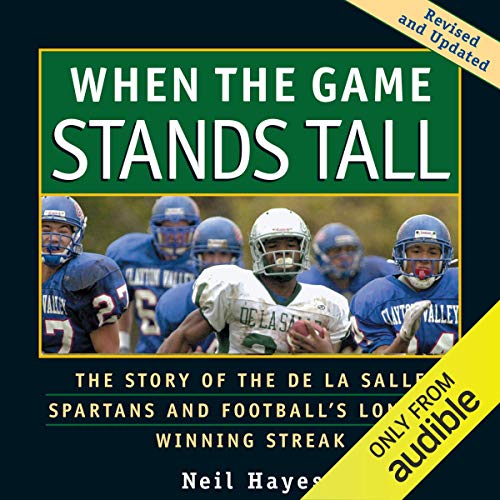 When the Game Stands Tall

The book that inspired the ESPN documentary 151: The Greatest Streak is now revised and updated!

By 2002, The Streak - a historic 13-year run of consecutive wins by the Spartans, a high-school football team from Concord, California, that couldn't be beat - was still going strong. In this revised edition of When the Game Stands Tall, author Neil Hayes, who had unrestricted access to the De La Salle team, writes from the inside about the games, the players, and their visionary coach, Bob Ladouceur, who managed to amass the highest winning percentage in football history (.995) through standing for something greater than winning. The book, which also features interviews with major sports figures like Bill Walsh and John Gruden, is a revealing portrait of the coach who believed above all in instilling basic life skills where winning is not the goal, but merely the byproduct of playing the game.

The Streak had become a national story long before it ended in September 2004. In this revised paperback, Neil Hayes catches up on the lives of the main characters and takes readers through the final tumultuous year. What results is a timeless and inspirational story of struggle, tragedy, and triumph.

What listeners say about When the Game Stands Tall

STORY (true sports documentary) - First off, I'm female and I love high school football. I heard about this incredible story when researching how my own team's winning streak (54 games) stacked up against past streaks. This book is about a great accomplishment, a great coaching program and a great philosophy for kids to learn, but football is meant to be watched, not heard, and there is so much history about the school and details about past and current players that I wanted to quit listening multiple times and just review this as "Could Not Finish." From watching previews, it appears that the movie (which is dramatized) would be much more entertaining than this book, plus it's only two hours. My advice is GO SEE THE MOVIE INSTEAD!!

There are wonderful lessons to be learned, however. One of my favorite quotes by the head coach, Bob Ladouceur, is "Victories are a byproduct of a larger vision." There are so many good lessons in this book that I actually feel guilty giving it a bad review.

PERFORMANCE - Mr. Linton's performance isn't terrible, but I found it pretty irritating. He has a pleasant voice, but he often has a broken rhythm and emphasizes the wrong word in a sentence. Then what really drove me crazy was his pronunciation of the word "self." He says it "salf." Maybe it's just that I'm used to Texas accents but I cringed every time I heard himsalf, yoursalf, mysalf. Scream!

OVERALL - I would only recommend this book to (a) people closely affiliated with this school and its story or (b) opposing coaches or players who might be interested in all the details about what made this football program so dominating. It's a very "clean" book ( no sex or bad language) and It's inspirational, but I'm very, very glad it's over!

I saw the movie and then loved the book

What did you love best about When the Game Stands Tall?

The story off learning how to win and then having each class of players believe in the coach and each other while almost never losing is in a fictional story something you would expect. In the real world for it to actually happen was really interesting.

Winning like 195 out of 196 sounds impossible but it happened. I am not amazed that since the 1994 season the coach has kept up the nearly impossible winning percentage.

What about J. P. Linton’s performance did you like?

It was steady and kept me involved. I was able to listen to the book in two days which meant his work kept my interest.

When the opposing coach had taken lead and was saying a prayer that his team would hold on. De la Salle started it's final drive and scored with 11 seconds left to beat him. After the game when he was asked what he was doing he said he was praying. He should have known not to say a prayer asking for the Catholic school to lose.

I would like a follow up book for the 10 seasons that have passed since the book ended.

I have read many books about football. This book is about a whole new way of looking at the game.
The coaches and players in this book had a system of belief where winning was not even mentioned but occurred more often then almost any other team in any sport. Coaches players and teams develop different ways to build themselves.
This book is the most interesting one that I have read about football because at it's core football is not what it's theme is.
The idea is building team spirit one relationship at a time. My goal in writing these reviews is to get you interested in the books I find compelling, thought provoking, or so bad that the book needs a warning label. This book does not need a warning label.
The most recent book that compares to it is No Excuses by Bob Stoops. That is the story of one man and his principals he used to build a team. This book on the other hand is a story of a philosophy embraced by a team that built itself.
This book tells that story in the best possible way. I hope you choose to enjoy both of them.

I always wanted to know... I'm not surprised.

Would you consider the audio edition of When the Game Stands Tall to be better than the print version?

Reading is better than listening to a book.

The book is not about football. Yes it is centered around a high school team, but it's much deeper than that.

Which character – as performed by J. P. Linton – was your favorite?

It made me pause and reflect on all of the teams that I have been on/part of, it makes you think about your whole life. Its a very power full insight in to young humans, and a powerful coach.

Please read, don't be distracted by the cover (that's a good metaphor for the high school), I can only wish that our public schools would take note... not about the sports programs but how to care for young kids!

Great story but I felt the author went into too much detail. I really liked the description of the games. However, there were too many games that weren't relevant to the overall story. I also felt that there needs to be more on how the coach used his techniques. I wanted to read a book about how to learn from this famous coach. But it seemed like at every chance the author wouldn't share this and instead just used the coaches own words. There should have been some scientific tie in as to why people performed better under this coach instead of others. It is more a documentary than a performance improvement book for business or teams. It was hard to pull out chunks of knowledge. But a great story nonetheless.

This book shows what believing in people, supporting one another and hard work can do. I am not a football fan, but this book is not really about football. I recommend it.

I only gave 4 stars because I did not like how the author jumped back and forth in time with virtually every chapter.

There is more to sports than merely winning.

Too much focus simply on winning in modern sport to the point of needlessly and recklessly harming the health and well-being of the athletes who play these sports. The purpose of playing sports includes playing the game well, love of the game and even More so love for their fellow teammates as well as their opponents, and ultimately to become virtuous and holy men and women.

Any additional comments?
People think of great coaching as what the coach does during the game. 99% of what a successful coach does is before game day. This book shows that in detail. Yes, it was about football and De La Salle, but the lessons are there for any sport and any program. Games are won by the preparation that takes place before: long hours of conditioning and practicing techniques and plays until they are second nature. In the case of De La Salle games were also won by not wanting to let down the guy beside you. As the book says, you can never play a perfect game, but you can always give a perfect effort.

High School Football at its Best

What made the experience of listening to When the Game Stands Tall the most enjoyable?

One of the best things I got out of his book was the comraderie between the athletes. They were truly brothers on and off the field.

book was great. very sports oriented. may be hard for someone who doesn't follow or understand football to follow along.