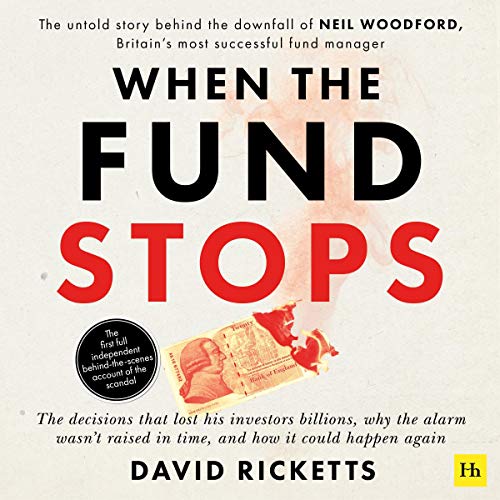 When the Fund Stops

Neil Woodford was the UK’s most celebrated fund manager. Savers who invested £1,000 with him in 1988 saw their money increase to £25,000 over 25 years. At the peak of his career he was managing £33 billion for hundreds of thousands of investors.

When he started his own fund management company in 2014, within just a few weeks it had attracted £5bn from his loyal fan base, including some of the city of London’s biggest hitters. Life was good. Away from work he was collecting high-performance supercars and chunky designer watches; he was rarely out of the saddle of his favorite horse. The BBC called him the “man who can’t stop making money”.

And then it all came to a sudden stop.

This book tells the dramatic untold story behind Woodford’s stunning rise and fall, and reveals why his multi-billion-pound investment empire really collapsed in such an abrupt and catastrophic manner.

In a fast-moving and compelling narrative, reporter David Ricketts takes listeners inside the rooms where extraordinary sums of other people’s money were wagered, trapped, and, ultimately, lost, in a scandal still sending shockwaves through the world of finance.

Thanks to unique and unprecedented access to the most important players, we meet an eccentric cast of characters and go inside the institutions involved, from Woodford’s own firm to those that made huge sums endorsing him - as well as those who failed to raise the alarm before it was too late.

What listeners say about When the Fund Stops

A competent telling of the story.

There's a curious contrast in this narrative between the fast, glamorous, world of wealthy fund-managers: and the very quiet settings of middle-England investors and country-councils who ultimately paid for and back-stopped the whole enterprise.

It's a sobering morality tale about hubris, and thinking that because you made a few good calls in the past, you must be right about your calls from then on. Perhaps less profoundly, it suggests that when it comes to investing, it might be a good idea to stick to what you know, as Woodford started to really come unstuck when he ventured into companies that were very different from those he had made his name buying.

It's not a strikingly lively book, but it tells the tale well enough and has some useful lessons to draw on.

The narrator is competent, and she suits the well-educated English setting of the narrative very well.

... Could have done without the narrator rhyming "says" with "haze", especially as she doesn't sound like she comes from the north. Was like hearing fingernails down a chalkboard each time.