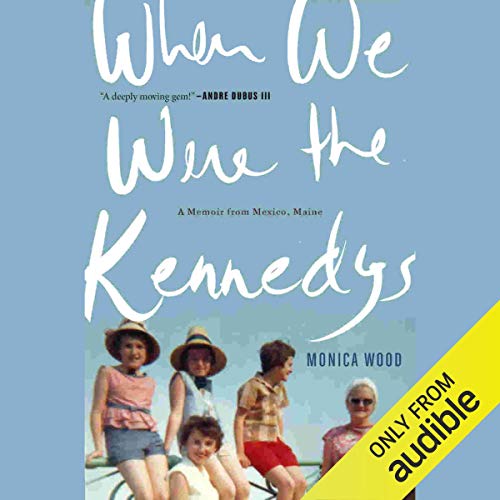 When We Were the Kennedys

1963, Mexico, Maine. The Wood family is much like its close, Catholic, immigrant neighbors, all dependent on a father's wages from the Oxford Paper Company. Until the sudden death of Dad, when Mum and the four closely connected Wood girls are set adrift.

Funny and to-the-bone moving, When We Were the Kennedys is the story of how this family saves itself, at first by depending on Father Bob, Mum's youngest brother, a charismatic Catholic priest who feels his new responsibilities deeply. And then, as the nation is shocked by the loss of its handsome Catholic president, the televised grace of Jackie Kennedy - she too a Catholic widow with young children - galvanizes Mum to set off on an unprecedented family road trip to Washington, D.C., to do some rescuing of her own. An indelible story of how family and nation, each shocked by the unimaginable, exchange one identity for another.

"The immediacy of Wood's storytelling is reflected in her open and candid narration.... Her narration is warm with these remembrances, and she occasionally slips into an appropriately Maine accent when quoting family members." (AudioFile)

What listeners say about When We Were the Kennedys

Beautiful, beautiful book!!! Monica reads her own memoir in a way that evokes empathy in her listeners.

Too flat: did not finish

I really wanted to love this book I also grew up in a former mill town in then-rural New England. However, I just couldn’t get through it.

The magic of everyday life

The author perfectly captures the many joys and heartaches of an authentic life in a mill town. She was brave in the telling and honest in the writing. Far more enjoyable than I expected, and as sweet as could be.

So very different from The One in a Million Boy. But worst of all, was the narration. I felt like I was back in Kindergarten in Storytime. I only had an hour to go to finish the book, and the narration was just too annoying. I couldn’t finish the book.

"Memory Lane", at least for some of us

Its topic is the death of a loved one, seen particularly through the eyes of a young child. Monica, the author, speaks of her father's death when she was nine years old in 1963, the same year Kennedy was assassinated. How did that death impact her own life, her siblings', her mother's and her uncle’s? You follow first the days, then the seven months and finally the two years without Dad – the "Dad-less days". This is touching, but never maudlin. The author also makes you laugh.

I liked very much following this good, religious family of Catholics. Few books talk about GOOD, upright families with high morals. Definitely refreshing. That is not to say they were faultless. Some of the adults certainly pulled whoppers, but these were good if ordinary people.

This book will also take you back to "Memory Lane" - the 1960s, the death of Kennedy and life in a small, American town, in this case Mexico. Yes, this IS a small town in Maine near the border to Canada. I didn't realize how many in the area spoke and breathed French. This is the town of Oxford Paper, that shiny, smooth, glossy paper we all recognize from National Geographics. Do you remember the song Big Girls Don't Cry, the TV show Mr. Ed, the Talking Horse, the school game Red Rover, pedal-pushers and tootsie rolls and....it will all come back when you read this book. To at least some of us.

The author narrates her own book. She does it well. She delightfully sings the lyrics of those songs, the oldies we remember so well.

This book is true to life and serious and fun too. Pick it up. Read it.

Monica Wood’s memories touch a chord with those of us who remember these days in America. Her characters

My mom lived all but a few years of her life in Mexico. And, I as a Mexico girl for the great part of my life, I was delighted to hear familiar sir names, the Oxford (and all its aliases), street named that I could to this day geographly pinpoint. Stores that have disappeared and those that still hang in there, and my favorite swimming spot...Roxbury Pond. All intertwined in a relatable, endearing story that makes you sad to finish...even if you're "from away".

If you could sum up When We Were the Kennedys in three words, what would they be?

It was sweet, non-confrontational

Which character – as performed by Monica Wood – was your favorite?

The daughter who was the narrator

Family who grieved with the Kennedys

Monica Wood is my favorite excavator of human complexities --- mining the depths of extraordinary love and ordinary grieving.

Ver y enjoyable, loved it. Brought tears to my eyes. Would recommend to anyone who wants to read a well written story without sex or violence