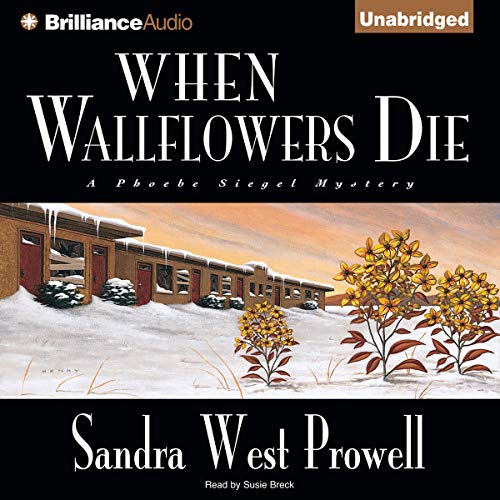 The intrepid Phoebe Siegel gets involved in the seamy side of Montana politics when she investigates the 25-year old murder of the wife of the man now running for governor. What Phoebe uncovers in the death of the young woman, a wallflower few mourned and fewer remember, is dangerously more than expected.

Challenged and threatened by what she's learned, Phoebe must also confront dramatic changes in her own life: her deepening relationship with Kyle Old Wolf, and her brother Michael's questions about his role as a priest. Even with her personal life in a whirl, Phoebe's persistence in the face of political adversity uncovers the truth.

What listeners say about When Wallflowers Die

This is the third book with Phoebe Siegel a P.I from Montana. She is hired to solve a murder, her detective father tried to solve a quarter of a century ago. As her investigation reveals some ugly truths, Phoebe rattles the cages of some of the Big Sky country's most powerful figures and risks her life many times over to see justice is served.
I liked this book not only because of the intriguing plot, but because Phoebe Siegel is a three-dimensional character with personal and family problems.Sandra Prowell introduces us to a full cast of unconventional characters and tells a sometimes sad story with a lot of wit.

An enjoyable book. Good plot and characters. Worth a read. I will read more of this author.

this one was okay --

I did listen to this book and remember that it was good. I am not remembering much about it. but it did fill the time.

I would say Pretty good

I couldn't get into it, but I'm sure others might. Snappy dialogue, too much inappropriate language for me, but that might grab other readers. I didn't listen long enough to find out if the actual story was any good, because the experience was too much like daytime television.