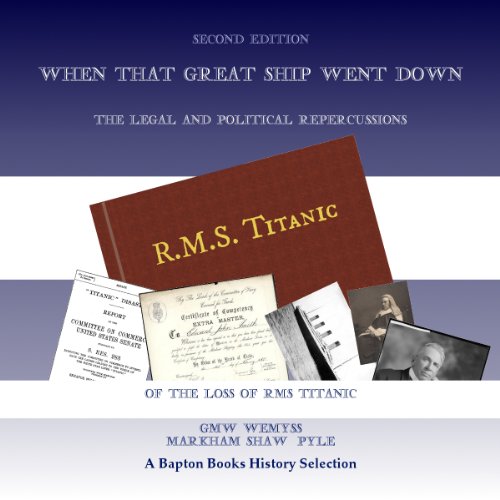 When That Great Ship Went Down

The Legal and Political Repercussions of the Loss of RMS Titanic
By: G.M.W. Wemyss, Markham Shaw Pyle
Narrated by: Stan Jenson
Length: 10 hrs and 20 mins
Categories: History, 20th Century
5 out of 5 stars 5.0 (1 rating)

When That Great Ship Went Down

RMS Titanic sank in 1912, a US presidential election year, and in the very first days of the great House of Commons debate on Home Rule for Ireland. The Marconi companies were heroes to the press and the public, who credited them with saving the lives that were saved. JP Morgan, who owned the shipping trust that controlled Titanic's White Star Line, was a major political target for the trust-busters. And members of the British Cabinet, including the Attorney-General who was to direct (and nobble) the Crown's case in the Titanic enquiry, were up to their necks in inside trading in Marconi shares.

This is the story of how, in Titanic's loss, 1500 souls were sacrificed to the "settled science" and "scientific consensus" of marine engineering. It is also the story of how the US and British loss enquiries were shaped by party politics, corrupted by corrupt politicians and the Marconi Scandal, tainted by the politics of Irish Home Rule, and - finally - salvaged by Oliver Wendell Holmes and the US Supreme Court, and by Lord Mersey's judgement in the Board of Trade Enquiry and the subsequent International Convention for the Safety of Life at Sea.

Titanic sank a century ago; but she sails on, the ghost ship of modern law and politics, shaping our world in ways we don't notice.