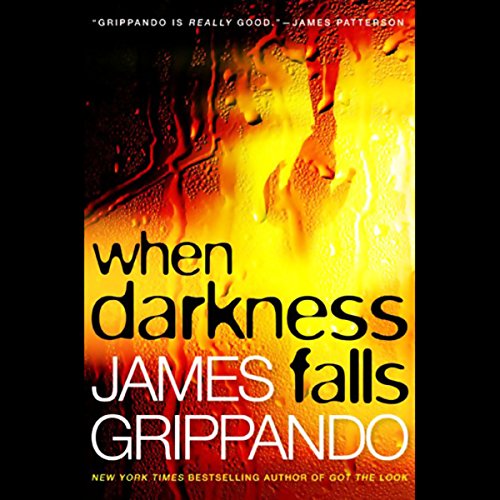 In the latest installment of this author's Jack Swyteck series, Jonathan Davis gives an uplifting performance to an implausible plot. A homeless man, who has access to several hundred thousand dollars, kidnaps Swyteck's best friend, Theo, who is tough and streetwise and is, thus, an unlikely victim. Factor in a female police officer who is the mayor's daughter who, in turn, is in love with a blind hostage negotiator - and you have a smorgasbord of improbable fun. Davis to his credit, gives this melodrama a spirited performance in clear, authoritative tones. He's at his best when describing the kidnapping, the most exciting scene in the story.

Miami criminal defense attorney Jack Swyteck isn't looking for a new client, at least not one who is homeless and in jail for threatening to jump off a bridge. But from the moment Jack is called to defend the man, who calls himself Falcon, something is amiss. For one thing, Falcon comes up with the $10,000 bail in cash. Then the body of a brutally murdered woman is found in the trunk of the abandoned car in which he is living.

Panicked and on the run, Falcon takes Jack's best friend, Theo, as hostage. They end up barricaded in a motel room, and Theo isn't the only one at Falcon's mercy. Jack has to work with the cops and their crackerjack hostage negotiator to free Theo and the other hostages before Falcon decides he has nothing to lose by killing them all.

But what Jack doesn't know is that Falcon has a much bigger agenda, and that people behind the scenes will stop at nothing to keep their dangerous secrets. Thus unfolds a lightning-paced story, as only James Grippando can tell it.

Listen to all of our titles in the Jack Swyteck series.
©2007 James Grippando (P)2007 HarperCollins Publishers

What listeners say about When Darkness Falls

This makes Jonathan Davis my new favorite narrator, not because the story is so good (I give that a 3+), but because Davis slips so effortlessly in and out of the various Miami characters in this story, after he had had me in stitches with his rendition of Texas characters in "Guilt Trip." This is the first Jack Swytek story I've found entertaining all the way through. It ended up in a much different place than I expected at the beginning, so I appreciate Grippando for that. Even got me to listen through some chapters of a hostage situation, though I usually try to avoid the misery of most kidnap and/or hostage stories. The author broke up the hostage part well with background info, but it might not have kept my interest so well without Davis's skillful, yet simultaneously relaxed style of narration.

An Evil Man is Haunted by His Past

This is not a courtroom drama like those that have served the Swyteck series so well. Nevertheless it still a remarkable legal and political novel. The publisher lays out the premise well enough, but like reviewer Shelly I was moved by the brutal political purge of thousands in Argentina in the 1970s. I was blown away by the author’s take on its history and have subsequently begun to research the subject on my own. That said, the characters, suspense, intrigue along with Jonathan Davis’ outstanding narration make this a 5 star experience.

Good addition to the series

This book, like all previous I've listened to, was great in several categories: plot, story flow (by which I mean I did not have to re-read pages when I came back to the book after putting it down for whatever reason), and character development. Although in fairness, as to story flow, and like the others, I could not put this book down. Grippando/Swytek has a style about him that keeps the reader glued from page one to page last. What I really liked about this book was how the action kept rising and rising to a climax and then the anti-climax kept rising to finally the falling action and resolution took place. As I say, character development was very strong particularly with the chief antagonist, "Falcon" and fellow protagonist, police negotiator "Vince". Of course, chief protagonist Jack Swytek is strongly developed. Theo Knight, Jack's "side kick" played a pivotal role as well. I don't re tell story lines in my reviews, but kudos to Grippando for his character development of the blind Miami Police negotiator Vince. The research spent unraveling that character's inner thoughts and instincts was not only time well spent story wise, but educational as well in understanding what goes on in the professional and personal life of a blind police officer/negotiator. No question, this was a great read. I highly recommend it to any Grippando fan.

When Darkness Falls is a wonderful suspense mystery. It's the 3rd (or 4th) book in the series, depending on if you count book .5 which was written later as #1. Anyway , again the publisher's summary sets up the book so well that to add to that part of the description would only spoil it for others. What the summary leaves out is that this story has it's roots set in the "Dirty War" in Argentina that took place in the '70s and early '80s when the Argentinian government became a military state that used terrorism to persecute political dissidents and socialist or anyone thought to be either. Most of these people (which numbered in the thousands) just disappeared. Again Jonathan Davis does an excellent job narrating. HIGHLY RECOMMENDED. If you found this review helpful please indicate so. Thank You.

easy to listen with a twist at the end. Theo plays a big role here.

If only it didn't have the awful musical breaks!!

Good story. So happy to have Jonathan Davis as narrator: he's great. But the musical breaks are just dreadful. Recommended anyway.

The books rolls along ok, but the last few chapters take this from pretty good to great.

Great book, despite the stereotypical ethnic best friend. Fantastic narration! Interesting aspects of history interspersed. Good story and character development. Last couple of minutes were probably not necessary. But still I give it 5 stars all around!