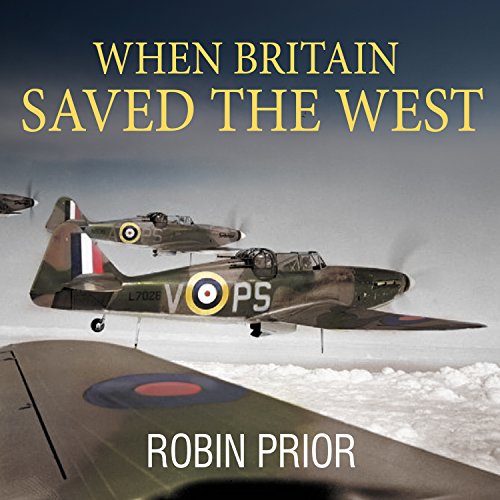 When Britain Saved the West

By: Robin Prior
Narrated by: Shaun Grindell
Free with 30-day trial

From the comfortable distance of seven decades, it is quite easy to view the victory of the Allies over Hitler's Germany as inevitable. But in 1940 Great Britain's defeat loomed perilously close, and no other nation stepped up to confront the Nazi threat. In this cogently argued book, Robin Prior delves into the documents of the time - war diaries, combat reports, Home Security's daily files, and much more - to uncover how Britain endured a year of menacing crises. The book reassesses key events of 1940 - crises that were recognized as such at the time and others that were not fully appreciated. Prior examines Neville Chamberlain's government, Churchill's opponents, the collapse of France, the Battle of Britain, and the Blitz. He looks critically at the position of the United States before Pearl Harbor and at Roosevelt's response to the crisis. Prior concludes that the nation was saved through a combination of political leadership, British Expeditionary Force determination and skill, Royal Air Force and Navy efforts to return soldiers to the homeland, and the determination of the people to fight on "in spite of all terror."

What listeners say about When Britain Saved the West

What made the experience of listening to When Britain Saved the West the most enjoyable?

Mr Prior provided the behind the scenes background to the history we (should have) learned in school (not sure schools teach much of anything today!) regarding the events leading up to WWII, the "phony war", and the Battle of Britain. Fascinating to learn about the mistakes made by the Nazi and Allied generals, Pollyanna-ish assumptions of Chamberlain and his appeasement cabinet regarding Hitler (rather like the assumptions of a current administration concerning Iran/nuclear deal), and the real impact of German air raids on British factory output and civilian morale. Much of the book, however, contained extremely detailed lists (for example, RAF estimates of "kills" for each sortie flown). In a real book, this might have been in a footnote and therefore tolerable. On Audible, it became rather dull and interfered with the progress of the story linel.

He had a pleasant voice, with appropriate inflection.

The interplay between Churchill and Roosevelt - and Roosevelt's consistent hedging/waffling/refusal to help the British. Not what we were taught in school (which taught that FDR was a brilliant god who saved the USA from the Depression and raced to the assistance of the British).

Military enthusiasts and war gamers may derive a lot out of the detailed description of Nazi/Allied troop actions during May 1940.

A great story but the narrator was clearly not British as shown by serious mispronunciation of place names and words and Americanised dates and numbers.
This jarred a lot but the description of events and personalities was very good, it explained what happened clearly and was most enjoyable

What did you like most about When Britain Saved the West?

What other book might you compare When Britain Saved the West to, and why?

Every book about the Second World War ever written.

The reader of this audiobook, Shaun Grindell, is one of the worst and most irritating readers I have encountered in almost a hundred Audible titles. He reads like an American affecting a British accent in some second-rate sci-fi show, and it is like nails being raked torturously down a chalkboard.
His accent is as English as my ears can detect, but his pronunciation and spoken grammar are entirely American. To listen to him butcher English place names like Berkshire (the first syllable of which he pronounces to rhyme with "twerk", as opposed to "Bark", which is how it should be pronounced) or Bromwich (which he separates into two detached syllables as "Brom-witch", instead of the "Bromich" which a normal British person would do) is nearly as painful as his mangling of dates and numbers. Instead of reading a date as (for example) "the twenty third of September", he says "September twenty three". There is not a person born on this island who pronounces dates in such a way, unless it be whilst tied to a chair and with a gun to their head held by an American linguist with designs on etymological reverse-colonialism.
I accept I may be easier to irritate over such things than many people, but for me it is a horrendous distraction to an otherwise very fine and detailed book.

"The film they refused to hire Shaun Grindell to narrate."

Please do not ever hire Shaun Grindell to narrate a book ever again. He makes my ears bleed.

No the narration spoilt it.

What was one of the most memorable moments of When Britain Saved the West?

The technical details of the German and British air forces.

He sounds English but the American style narration spoilt it for me. Some examples that jarred were One June instead of 1st June on all dates, his pronunciation of place names so Castle Bromwich becomes Castle Brom Witch. The total inability to pronounce pre-decimal currency so 7s 6d becomes seven s and 6 d. Whoever produced this audible book did a very sloppy job and I can only assume that it wasn't produced for the UK market.

If this book was produced for the UK market then whoever was responsible couldn't have listened to the finished article. A good story but awful narration.

A Difficult Listen Due to Poor Narration

Although the text is informative and well written, the narration is so bad that I found it difficult to listen to what was being said. The American pronunciations would be easier on the ear if spoken with an American accent, but the real problem is the mis-pronunciation of words and places and the poor phrasing when reading. Where there are quotes it is impossible to tell where they start and end and the narrator clearly has no knowledge of the subject about which is he is reading. I did at times find the text difficult to follow, though whether this was due to the way it was written or the narrator's poor delivery I couldn't say.

Best left for a different audio edition. I will now buy the book and read it myself.

That Britain, as a country, stood alone against the Nazis for so long has often been glossed over. There was help from various Free Forces and the Empire, but the lack and tardiness of assistance from the USA is put into clear context and significence. The economic cost of the subsequent help from that ally still resounds today and is not appreciated by present generations.
With regard to the performance, there were some irritating mispronunciations of place names and strange method of detailing military divisions - such as '1' June and '2' Army instead of 'First of June' and 'Second Army'. More colour was needed in the quotations from the main protagonists.
Overall. a well made, worthwhile narrative and context were given.

The worst narration I have heard

I want to finish this audio book but the appalling narration makes it impossible. If it was a CD I would give it to a charity shop. The worst possible listening experience - how could this have been marketed? Buy the book and read it instead.

This book focusses on Britain from the outbreak of war to the entry of the USA to the war. It veers from the political mechanics of Churchill becoming leader to the story of the Battle of Britain and in doing so the style changes from thoughtful analysis to ripping story, which is a nice change of speed for the reader.