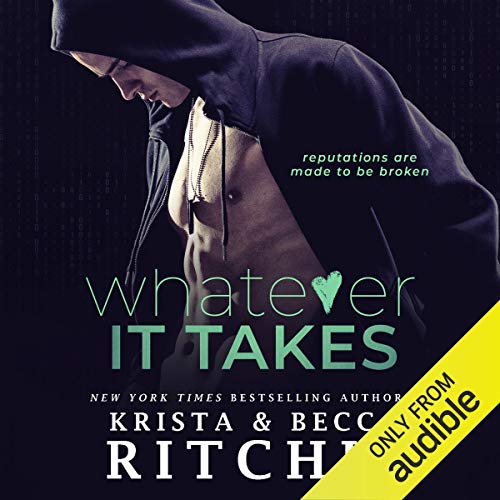 I have a bad reputation.

Call me what you want: Bad Boy Next Door. Trouble. That Kid Who Can’t Do Anything Right.

When Willow moves into my neighborhood, nothing should have happened. She’s geeky. Shy. A true wallflower.

Willow is a good girl.
Too good for me.

And how the hell was I supposed to know that she’s related to Loren Hale - yeah, that douchebag celebrity that lives on my street. The same guy I've been pranking by spray painting vulgar words on his mailbox and worse. Much worse.

I'm cursed. Simple as that. But here's the thing about people who are cursed - they break everything they touch.

Whatever It Takes is the first book in the Bad Reputation Duet and can be heard and enjoyed without listening to any of Krista & Becca's other novels.

What listeners say about Whatever It Takes

For the young adult market.

For young adults, the themes and storylines within this series are better suited to their market. It is sweet and age appropriate, but still has a tender sexy element of young love. For those who love the 'Like US' series, I found this a drastic contrast to the passionate love styles, where well rounded characters intertwined family stories, but there was excitement missing from this book. In 'Like US' I felt a close connection to the characters and my imagination was really engaged in a full sensory experience. This story was just a bit flat in comparison. A bit slow for me. A cool intro into the younger market, but for more mature readers/listeners, especially die hard "Like Us" fans...this is not something I would recommend out of all the books that these terrific authors have!

As one would expect from KB RITCHIE's work this book was fantastic. Simply put if you have read and loved the Addicted & Callaway series then this book is a must read.

Willow and Garrison own my heart and soul. I’ve been waiting for this books for years, I kid you not. As you can imagine, my expectations were high. I find Willow entirely too relatable. It’s like the authors managed to get into my head to create Willow Hale. We see Willow’s first semester of college throughout the book, and I saw my own experience at college here. She’s quite and a bit awkward, but she also has this quiet bravery that I hope and strive for. Garrison Abbey is so full of self-loathing. He’s a guy who has made a lot of mistakes in his young life, and while he strives to make better choices, he feels like he’ll never be worthy of anyone’s forgiveness. This book is told through Past and Present scenes, which I thought worked really well. My one peeve was that all the “Past” scenes in this book were straight from the web series. So if you read the web series, you’ve read about half of this book already. However, the “Present” scenes more than make up for it. The “Past” scenes show you how Willow and Garrison met, and their evolution from strangers to friends. The “Present” scenes follow Willow in college, Garrison working at Cobalt Inc., and them trying to maintain their long distance relationship. My heart was so full after reading this. I cannot wait for the next book. This does end in a bit of a cliffhanger, so the 28th cannot get here soon enough. I’m expecting a few things for book 2, and I hope it delivers. I recommend this to anyone who likes their angsty romances. Also, if you’ve read and enjoyed a K.B. book, you will love this one!

I love getting a deeper look into Garrison and Willow's budding relationship. I enjoyed the past and present scenes. Can't wait to start the next book.

This audio is perfection!

I gave this 4 stars the first time I read it, and I don’t know if it’s the audio or the fact that I actually read it instead of picking it up and putting it down, but, on second listen this is definitely a 5 star read for me. The narrators are perfect for this book. You can really feel the pain and heartache within Garrison. I just wanted to wrap him up in all the love and I can’t wait to see how this story wraps up. I love Willow and Garrison so much!

I loved being back in this world! If you enjoy New Adult romances, Whatever It Takes is a must read. There are parts that are set in college, a first love between a bad boy and a good girl, and a little bit of angst. Cooper North and Charlotte North did a fantastic job narrating Garrison and Willow's voices. It was just a great first book in this duet and I immediately dove into book two as soon as I finished WIT. Fans of the Addicted series know we've been waiting a long time for Willow and Garrison's much awaited romance, and it's finally here. We get to see how Willow and Garrison first meet alongside their present-day, long-distance relationship and how they deal with living across an ocean from each other. It was an interesting contrast to read about their relationship at two different points – one being sweet, slow, romantic, and the other full of longing and little bit of heartbreak. The narrators voiced all the ups and downs, all the emotions of this book so well. It's a wonderful audio!

My Heart Breaks for these Characters

I loved it even more the second time. Willow and Garrison are just precious little beans. I want to hug and protect them-especially Garrison. I really enjoyed the narrators. I can be picky and I had never heard anything from them before. But they were so good. They didn’t try too hard which I find happens a lot-especially in romance. And they had good voices for the opposite gender. That always drives me crazy when a guy does a super nasally female voice. Probably because I’m a little nasally and I’m bitter. Here’s my thoughts from my first read: Willow and Garrison just touch my heart. They are my 2nd favorite Ritchie couple. The story goes between the past and present. The past is when they are 17 and when they first met. That is also what was in the original Wattpad story. My heart just melts when they are interacting. I just love the Tumblr questionnaires. The present takes place 3 years later when Willow goes to college in London. So, they are facing a long-distance relationship. The conflicts surrounding that are fairly predictable, but I’m still invested in their story. Of course, I love the romance between Willow and Garrison. But I have always loved the friendship between Lo and Garrison. I’m a huge sucker for Lo, but his desire to help Garrison not be him is beautiful I hope there is more of this friendship in the next book. I also want more of the growing friendship between Willow and Daisy. It is really hard to read about Garrison’s family. Let’s be honest, his brothers are physically abusive. It’s so disturbing, because there are really bad people in the world. I hope he is able to escape this and enjoy a happy life he truly deserves. I guess I’ll find out in a couple weeks.

I’ve been waiting for a finished version of this book for years and years and it is finally here! Charlotte and Cooper brought it to life so well and it so adorable how they are married!!! It makes the story feel even more real when you know the readers are married. My favorite parts of the book were the chapters set in the past bc those were what I loved back in the day. Thank you KB!! -Written by Olivia (Steve’s Daughter)

it's a good young adult book

this book is great addiction series addition. great to see situations already shown on previous books from different perspective. all the book is very slow... I am not sure if I liked this due if I haven't read the whole series...