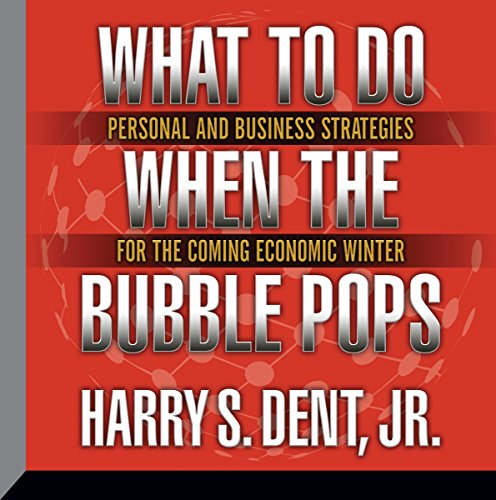 What to Do When the Bubble Pops

What to Do When the Bubble Pops

Harry Dent has been predicting for some time that we are about to enter a prolonged downturn, one that will be looked at by historians as a classic economic depression, due to demographic factors: one of the largest generations in history - the baby boomers - are leaving the workplace, either due to planned retirement or involuntarily (due to layoffs or not being able to find work), which will have a profound impact on all sectors of our economy. This economic downturn could have been swifter and the pain much less had the Fed allowed it to happen naturally. However, due to several rounds of quantitative easing, essentially pumping "free money" into the economy, the Fed has not only delayed the inevitable, but they have ensured that the downturn will be much longer and much more severe than it could have been.

Harry Dent believes that the Fed cannot keep the bubble from popping much longer - and when it does pop, every individual will need to be prepared for a period he calls an "economic winter". In this program, you'll learn the personal and business strategies that will be essential to protect and preserve your assets and the few areas of the economy that will still do well during this winter period. This is essential listening for every American citizen.

Too much self promoting.

The answer to the question in the title came very very late in the recording. The recording had a ridiculous number of self promotional "I predicted this" and "I predicted that" statements, and then the sales pitches came. I will ask Audible for a refund.

This book is exceptional for anyone from beginner to expert in financial literacy on both micro and macro levels, with regard to both personal and business finance. Dent paints a global financial picture that is substantiated by his unique insight into markets, historic trends, demographics, stocks, real estate, their data, their interrelation, and their future projections. Of immense value are his actionable recommendations for how to weather the impending storm and resurface unscathed and in stronger standing.

The Dent series has been extremely informative. I wish there was more in the Dent series pertaining to Derivatives and Hedge funds.

A strong case is made. Harry remains passionate

Short listen with lots of specific recommendations, practical. Opposite prediction compared to Rickards on gold.

interesting and an easy listen.

Mr. Dent would make a great reader for audible. Good book too. I enjoyed it very much.

This has great information to do my own due diligence and to prepare for the future financially.