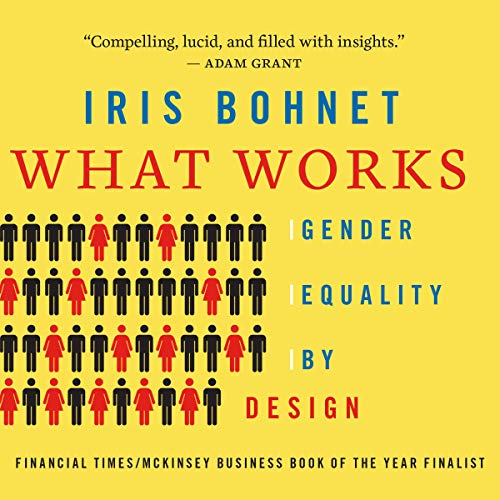 Gender equality is a moral and a business imperative. But unconscious bias holds us back, and de-biasing people’s minds has proven to be difficult and expensive. Diversity training programs have had limited success, and individual effort alone often invites backlash. Behavioral design offers a new solution. By de-biasing organizations instead of individuals, we can make smart changes that have big impacts. Presenting research-based solutions, Iris Bohnet hands us the tools we need to move the needle in classrooms and boardrooms, in hiring and promotion, benefiting businesses, governments, and the lives of millions. What Works is built on new insights into the human mind. It draws on data collected by companies, universities, and governments in Australia, India, Norway, the United Kingdom, the United States, Zambia, and other countries, often in randomized controlled trials. It points out dozens of evidence-based interventions that could be adopted right now and demonstrates how research is addressing gender bias, improving lives and performance. What Works shows what more can be done - often at shockingly low cost and surprisingly high speed.

I loved this listen. To recap my heading this read helps people interested in systems design for the means of changing behaviors relating to gender bias, understand flaws that they themselves or the institutions where they work or study commit that inhibit fair and or equitable treatment, access, and promotion for women and other folks who experience gender, sexual, and other bias. It is research based includes web resources, modifications that can be accomplished pulling from simple changes regarding the art and messaging that we hang on walls to more complex and long range goals including hiring, interviewing, and ethical workplace practices, as well as examples of ways that planning and implementing fundamental societal shifts have benefitted women, girls, and others in minority groups. Iris Bohnet, is my new favorite economust!

The book provides a lot of quantitive objective information that helps us to realize the importance of gender equality and how much we are biased in general.