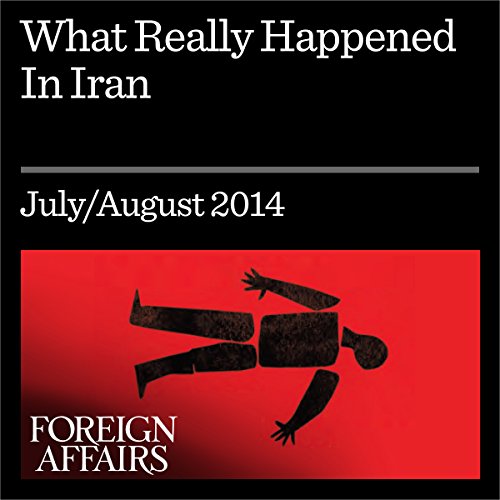 What Really Happened in Iran

Conventional wisdom about the 1953 coup in Iran rests on the myth that the CIA toppled the country's democratically elected prime minister. In reality, the coup was primarily a domestic Iranian affair, and the CIA's impact was ultimately insignificant.

What listeners say about What Really Happened in Iran

propaganda by the right to justify imperialism

where did the author get his data? the twist of truth to yield to one's own need for control and power is nothing but propaganda and an excuse to further exploit, blame and control the victim.

What made the experience of listening to What Really Happened in Iran (Foreign Affairs) the most enjoyable?

Yes. Many times, many medias tried to call Mohammad Mosadegh the democratically elected government. Mossadegh was appointed by Shah and approval of the parliament like all other prime ministers. Is mossadegh was elected democratically, so all before and after Mosadegh was elected democratically. But the name of the game to call Shah who made a coupe against Mossadegh is to reduce Shah's legitimacy of his regime, and give legitimacy to Iran's revolution of 1979. The regime and their allies have shown that Shah took the power against the constitution and toppled Mohammad Mossadegh with aid of foreign powers against the will of Iranians, which was a big lie.
This book has neutral moment to what happened in 1954.

What other book might you compare What Really Happened in Iran (Foreign Affairs) to and why?

I always believed that the fairy tail of coup against Mosadegh was a cover for USA and UK to hid to what they really did in 1979 results in 1 million Iranian casualties and destroying all Iran infrastructure and Iranian civil laws. They support Khomeini come to power in 1979. and also the regime of Iran enjoyed the fairy tail to show Shah governments were not legitimate due to a coup.

The part that admits overthrowing Mosadegh was made by people who liked Shah and CIA has insignificant role on it.

As it is indicated in this book, Islamic regime in Iran enjoy a lot with the fairy tail of coup against Mossadegh. They show Shah regime not legitimate by accusing him who perform coup with aid of foreign agencies, and took power like a thief; therefore, he must be overthrown which would legitimize the Islamic revolution in 1979. Revolutionary claims that initial pure goals of the revolution was deviated, therefore, people must wait and perform reform. the reform which has been always a make-up for the Regime.

Love it. Concise and precise. Good narration. Gives you ins and out of what happened in Iran.