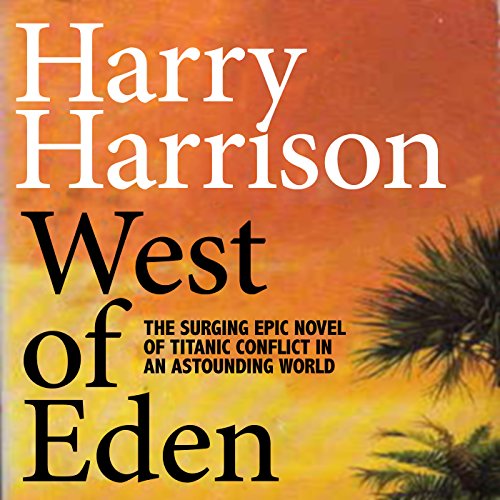 Sixty-five million years ago, a disastrous cataclysm eliminated three quarters of all life on Earth. Overnight, the age of dinosaurs ended. The age of mammals had begun. But what if history had happened differently? What if the reptiles had survived to evolve into intelligent life?

In West of Eden, best-selling author Harry Harrison has created a rich, dramatic saga of a world where the descendants of the dinosaurs struggled with a clan of humans in a battle for survival. Here is the story of Kerrick, a young hunter who grows to manhood among the dinosaurs, escaping at last to rejoin his own kind. His knowledge of their strange customs makes him the humans' leader...and the dinosaurs' greatest enemy.

Rivalling Frank Herbert's Dune in the majesty of its scope and conception, West of Eden is a monumental epic of love and savagery, bravery and hope.

What listeners say about West of Eden

Narration is flat and monotonous.

Print copy is wonderful. A great story ruined by monotone narration. It felt like it was being read by a computer. Makes a good sleep aid.

Some of Harry Harrisons best work

This series was hard to find when itcwas published on dead trees. its a gem and the series just gets better. Great reading by Mr Rummel as well.

Good story, predictable at times. Characters were unique. Narration strong but not smooth as in many stories and did not flow.

He was a Master of setting up a world you longed to visit in your mind. The world of Eden, an alternate earth, is full and lush. Described and painted in wonderful detail. I love this book series.

This is a wonderful story of betrayal, redemption, and destruction. it's hard to describe the story in terms of today's fiction, because it's so timeless in scope. looking forward to hearing the next in the series.

I was coming off of abandoning Far-seer which just didn’t captivate at all.

Then I found this gem which lured me in. So in love with the world created here.

hard to get into but worth it

unlike most by Harrison, I found it difficult to get into this book at first. but I suck with it and found it worth the effort. Good read

A fetching take. Intriguing creation of a reptilian civilization. B b b b. A. A.

A great and roaming story

I have read the book many times. I'm so happy it's now available in audio book. The reader took a little getting used to but well worth persevering. A wonderful story in a well thought out and hugely detailed world.

The premise for the book is good and it starts out well but goes on for too long with a repetitive storyline. It would have benefitted from being kept shorter.
Well narrated.