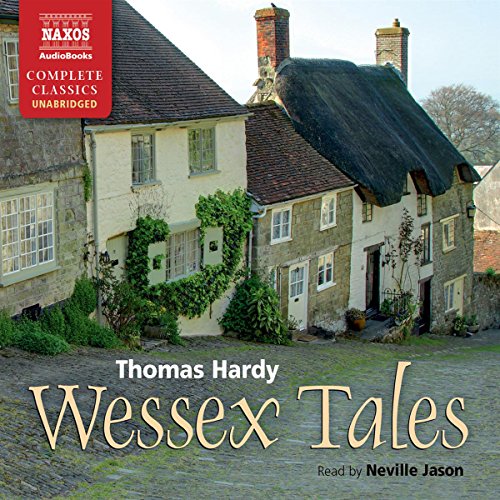 Wessex Tales, a collection of short stories including "The Three Strangers", "The Withered Arm", and "The Distracted Preacher", deals with a number of timeless themes seen so often in Hardy’s work: marriage, class, revenge, and disappointed love. Many of the tales have a supernatural tinge, and all are set around Hardy’s much loved homeland.

What listeners say about Wessex Tales

A couple of the stories in this collection have something I wouldn't have believed was possible: something almost resembling a happy ending. I love Thomas Hardy, but I do get tired of the relentless hammer of fate he uses to pound his characters, often with the help of contrived coincidences (or somebody's odd reluctance to speak up at The Key Moment).

Most of the stories here are not happy. Some, like "The Imaginative Woman" and "The Melancholy Hussar," end brutally. A couple, like "The Withered Arm," are a bit spooky - and end brutally. Relationships between husbands and wives are mostly stunted and ill-fated.

So it's not a collection to be undertaken lightly. But there are occasional touches of humor, as there sometimes are in Hardy, and a couple of people who escape the overall sentence of doom. Neville Jason does a wonderful job narrating, as he did with "Jude the Obscure." Overall, it doesn't pack the same punch as Hardy's longer works, but the stories make up an interesting sampler.

Thomas Hardy has earned his place in British literature. Without a doubt, he's a good writer. However, in most of his stories, the conflict is caused by an unhappy love affair and the fate of the characters lies in an extraordinary coincidence, which ultimately ruins their lives. The stories also tend to run on and could have been edited - a lot.

Neville Jason is a great reader, though. I would not hesitate to buy a book narrated by him.

Has Wessex Tales turned you off from other books in this genre?

No, but now that I understand this author's vision of life, I doubt I would listen to another book by Thomas Hardy.

My favorite of the short stories was "The Three Strangers" - involving the search for an escaped prisoner in an isolated farming community. It is quite clever and is the only story in the collection that has a happy ending.

A better similar collection of short stories based on everyday happenings in the lives of ordinary people is: Rudyard Kipling's stories of India, Tales from the Hills.

Interesting to hear Hardy's writing used for shorter stories. Less familiar stories, although I understand that they were dramatized for television in the early 1970's

Each story interesting in isolation and gripping as a whole.Excellent narration.I would recommend Wessex Tales as a good introduction to the works of Thomas Hardy to those not familiar with his particular style of writing.

Not what I thought. The story if there was one was a total disappointment

Reader not for me

This volume is a great set of stories by Hardy. And the reader is very capable. But his voice soon grated on me. Too posh and precse for my taste. Perhaps better suited to Jane Austen or the like. Shame