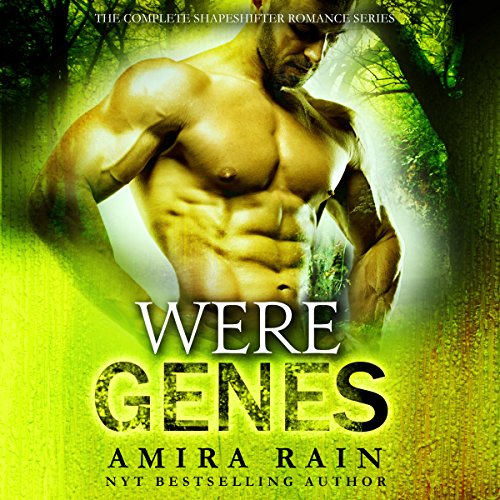 What if you woke up tomorrow and discovered you could turn into a dragon? Or a bear? Lion? Wolf?

This is the crazy situation that our heroines find themselves plunged into in each of the four books from the top-selling WereGenes series by New York Times best-selling author Amira Rain.

Every book from the series is included in this download, so do not miss out. Get addicted now!

In a world where some humans are blessed with a special gene that allows them to shapeshift into different forms....

Kylie Donovan has just discovered she is a carrier of "The Dragon Gene".

As a result, she is being forced by the government to mate with a male carrier of the dragon gene called Matthew in order to produce a special "super" baby that will have two sets of the gene.

However, some genes should never be combined - and the results of this matchup could about threaten the existence of the planet and dragon-kind as they know it....

With the public becoming more aware of the existence of "WereGenes", Samantha Miller was the latest human to have herself tested.

And the results were shocking.

Not only was she a carrier of the "Bear Gene" but she possessed the rare "Supergene".

And as a result, the government was offering her a substantial cash payment if she were to become the mate of handsome WereBear Chief Reed Wallace.

And it was an offer so good that Samantha simply could not turn it down....

What if you woke up tomorrow and discovered you could turn into a lion?

But that life was turned upside down the moment she found herself kidnapped and told she was a carrier of "The Lion Gene" - a rare gene that gave her the ability to turn into a lioness.

What listeners say about WereGenes: The Complete Paranormal Romance Bundle

What disappointed you about WereGenes: The Complete Paranormal Romance Bundle?

I found the story line boring and weak. I've read similarly based books by Jesse Donovan meaning needing to produce a shifter child to increase numbers. I found this juvenile in writing and exceedingly boring and not worth the credit spent.

What could Amira Rain have done to make this a more enjoyable book for you?

The storyline could have been better written. You don't know what made bloodborn shifters other than they were power hungry, greedy, and had red eyes. What split the shifters into 2 different types? It was just not well developed.

I liked his voice, it was a nice base that was smooth and tried to make the stories better. The first story was stilted although I think it was the actual writing.

The first story was about a dragon shifter who was the commander and his wife. It revolved around her, her best friend, and their spouses. She and her friend volunteered because they needed money because their business went under due to the war between the bloodborns and the weres. The story was ok but weak and the characters were thin. It was never explained what made the bloodborns differant other than they were power hungry and had red eyes. But I did like the dogs, they were adorable. The story didn't follow the summary.

The second story was about a chief bear shifter and his spouse. She has the ability to throw knifes and this caused issues. It was important that she quickly become pregnant so she could pay for her mom's experimental cancer treatment and because the shifters were weak because the bloodborns attacked with chemical warfare weakening them. It was boring. I kept looking at the time to see how much longer till it was finished.

The third story is about a lion shifter and his spouse who was kidnapped. She is forced to mate a lion shifter commander. The bloodborn in this story is alligators. I just couldn't finish this story and skipped ahead to get through to the end then returned the book. Again this book didn't follow the summary.

The 4th story was supposed to be about a wolf shifter and I didn't even listen to it so cannot review this one.

Initially I thought this would be a good credit with 4 stories and over 20 hours. Reality is i just didn't like it and had to return it. I won't be listening to this writer again.

blaaaa girls are to childish and bitchy

would of been better if the girls were not so fucking childish and stupid..

Good story. It's hard to listen to as the narrator does not read well at all, but would be an enjoyable read.

I don’t know if it was the book or the narrator but I could not even finish the first story. It was like having the computer read the book for you with very little inflection and no emotion.

Worse narration I have ever listened to,

Absolutely the worse narration I have ever listened to! I really tried. The story itself has too many minute details that add nothing to the story line, but listening to that voice drone on, made me want to scream.

I like the storyline but narrator is bad. He sounds robotic. No emotion. Narrator is Charlie Boswell.

I’m so accustomed to narrators at the least giving the characters different voices to make the story more real. I wasn’t prepared for just having the words read to me and not always in a good flow. Each of the four stories were so the same, just with a different gene. Listening to it exhausted me. I wouldn’t recommend it.

I will never get these hours of my life back!

Have you ever read a book that makes you feel like a few brain cells have died painfully just trying to make it to the end? I often try to soften the blow if I don't like a book or simply don't leave a review but my head hurts so badly from just 5 hrs of this!

Sweet Jesus, I will never get these hours of my life back! I will never be able to undo the damage to my brain! *bangs head on keyboard* Why why why does having a simpleton for a leading character appeal to so many authors!? That's just lazy plot building, relying on your characters to be stupid so you can have a plot! And I haven't even gotten to the stilted writing style and even more stilted narrator (though I don't know how much he could have done given what he had to work with). I was about to cry out &quot;Dear God please make it stop!&quot; but then I remembered I could make it stop - I then speedily applied my finger with great relief to the stop button. And so despite my usual dedication to finishing whatever book I start this is definitely going to be a DNF. My brain cells are just too valuable to throw any more of them away. I already lost a load to my kids! Thank you for letting me vent. I am calmer now.