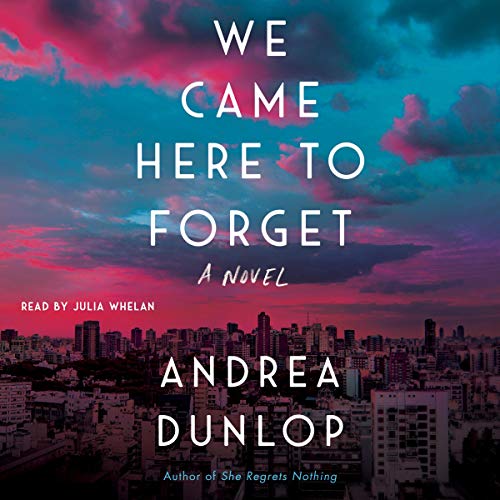 We Came Here to Forget

From the author of She Regrets Nothing, which BuzzFeed called a “sharp, glittering story of wealth, family, and fate”, comes a vivid novel about a young Olympic skier who loses everything and escapes to Buenos Aires, where she reinvents herself, meets a colorful group of ex-pats, and becomes enmeshed with a man keeping dark secrets of his own.

Katie Cleary has always known exactly what she wants: to be the best skier in the world. As a teenager, she leaves her home to live and train full-time with her two best friends, all-American brothers Luke and Blair, whose wealthy father has hired the best coaches money can buy. Together, they are the USA’s best shot at bringing home Olympic gold.

But as the upward trajectory of Katie’s elite skiing career nears its zenith, a terrifying truth about her sister becomes impossible to ignore - one that will lay ruin not only to Katie’s career, but to her family and her relationship with Luke and Blair.

With her life shattered and nothing left to lose, Katie flees the snowy mountainsides of home for Buenos Aires. There, she reinvents herself as Liz Sullivan and meets a colorful group of ex-pats and the alluring, charismatic Gianluca Fortunado, a tango teacher with secrets of his own. This beautiful city, with its dark history and wild promise, seems like the perfect refuge, but can she really outrun her demons?

In alternating chapters, Katie grows up, falls in love, and races down the highest peaks on the planet - while Liz is reborn, falls into lust, and sinks into the underground tango scene at the bottom of the world. From the moneyed ski chalets of the American West to the dimly lit milongas of Argentina, We Came Here to Forget explores what it means to dream, to desire, to achieve - and what’s left behind after it all disappears.

What listeners say about We Came Here to Forget

...it took too long to get to the actual story. I enjoyed greatly the this book moved back and forth in time. The characters were all believable and well-fleshed out. The problem I had with it was how long it took to finally find out what happened. Without revealing too much, I think the story would have been better with knowing the secret in the beginning because it would have interesting to see how the characters developed earlier. I would recommend it but know in advance it is going to take about 75-80% of the book for something to be revealed.

Wasn’t sure where this story was going but I was surprised at every twist. Such an amazing book!

This was a book I couldn’t put down, I had to know what happened! It’s the first book in awhile I have felt that way about so I am giving it five stars across the board!

so sad. but easy to listen to. love this narrator. she is my favorite I was confused by the Edward interactions in the beginning, he was too elusive. I would either make him more or less accessible as to not confuse to reader. I can not seem to like G, he is a douchebag through and through. Narcissistic, like her sister, maybe its why she is drawn to him? anyway, easy listening, was always struggling to stop and save more for my next commute

Interesting story; but the ending was quick. It left me with several questions. The reader was fantastic as usual!

Complex and real relationships in an entertaining and engaging story. We all have a reason to forget

Never wanted it to end

So beautifully written, so wonderfully narrated. Did not want it to end, but when it finally did, the ending was perfectly executed.