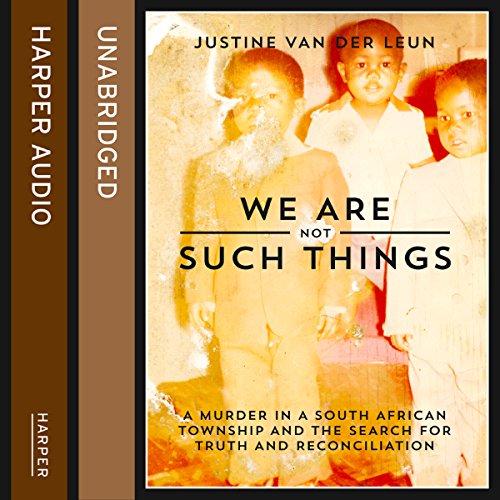 We Are Not Such Things

A Making a Murderer set in South Africa - a gripping true-crime story of murder and the justice system in the shadow of apartheid.

In 1993, in the final, fiery days of apartheid, a 26-year-old white American activist called Amy Biehl was murdered by a group of young black men in a township near Cape Town. Four men were tried and convicted of the murder and sentenced to 18 years in prison.

A few years later, they had been freed. Two of the men were subsequently employed by Amy's parents to work at a charity set up in her memory. The men grew close to the Biehls. They called them 'Grandmother' and 'Grandfather'.

Justine van der Leun, an American writer living in South Africa, set out to tell this 20-year story, but as she delved into the case, the prevailing narrative started to unravel. Why didn't the eyewitness reports agree on who killed Amy Biehl? Were the men convicted of the crime actually responsible? And could it be that another violent crime committed on the same day, in the very same area, was connected to the murder of Amy Biehl?

We Are Not Such Things is the result of Justine van der Leun's four years investigating this strange, knotted tale of injustice, hatred, forgiveness and reconciliation. It is a gripping journey through the bizarre twists and turns of this case and its aftermath - and a lucid, eye-opening account of life today in a society still fractured and haunted by apartheid.

"A murder story told with the dramatic tension of Truman Capote's In Cold Blood and the precision of the very best non-fiction reporting. Each page bursts with fresh insights." (Barbara Demick, author of Nothing to Envy)
"Fascinating. Shatters convenient narratives about the end of apartheid and the nature of justice, and takes readers on a headlong chase for deeper truths." (Jill Leovy, author of Ghettoside)
"This is not just fine journalism but astonishing storytelling. Justine van der Leun brings to the page a rare combination of muscular reporting, limitless curiosity, soulful vision, courage and tenderness" (Jeff Hobbs, author of The Short and Tragic Life of Robert Peace)
"Suspenseful and engrossing. Van der Leun shows how a powerful desire for reconciliation can in fact obscure the truth, a truth we need in order to establish real equity and the justice that all people deserve." (Piper Kerman, author of Orange Is the New Black)
"This unsparing but compassionate work will enlighten and shake its readers." (Norman Rush)
"A tour-de-force depiction of modern South Africa. Van der Leun succeeds in telling a complex, nuanced, and perhaps ultimately unknowable story that will captivate all readers." (Publishers Weekly)

What listeners say about We Are Not Such Things

at times overly detailed but thoroughly worth it. the insights into key events in south Africa's history are excellent. a fascinating story and educative history rolled into one

A splendidly written and equally well narrated novel about real life South Africa. A string of events which led to the death of a young, white American girl in horrific circumstances, this story allows the listener an eye-opening insight into the black-white historical divide in the country. No frills ~ just honest, well researched factual information which should be heard by the World!

If I could give this 6 stars, I would

Although most applicable to South African listeners, this book delivers as a true crime/ memoir/ historical novel and can be enjoyed by most. I thoroughly enjoyed listening to the author's opinion on the TRC and, indeed, the justice system. Wonderful.

"Taku and Wowo had worked for white governments and white-owned corporations and then for black governments and corporations still run by whites, from the time of their youth until old age. They had stayed away from drink and drugs and all the temptations available to frustrated people in the depths of poverty. They had raised black boys in Gugulethu, none of whom was dead or in prison; they had lifted paralyzed adult children up on bad backs and slept in beds with little grandsons and taught neighborhood kids soccer and fed their hungry nieces and nephews; they had nurtured marriages for fifty years; they had built and improved family homes with their bare hands. These were the respected elders of their communities, heads of overflowing families. And here they stood before me, a young white American female thirty years their junior, chastened, admitting they were too broke to pay for the gas necessary to make it out to their ancestral land."

This is interesting - a foreigner's view of SA, and it is revealing. I enjoyed it. The narrator is great BUT she doesn't know how to say any of the local words, and for me this spoilt the book. Audible, you really ought not to get someone who knows these words to read this kind of book. This narrator will do a great job of English and American books - but not South African books