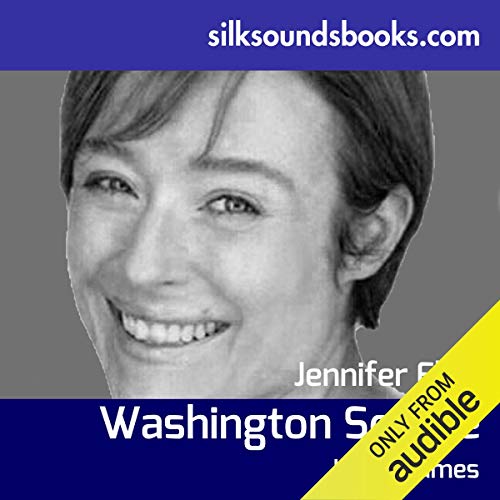 The battle between a father and a daughter is usually portrayed in literature as a struggle between a headstrong but feisty girl and a tradition-bound lead weight of a father. Henry James, of course, had to do it somewhat differently.

He tells a story of an intelligent man riding the turn of the tide in mid-19th-century New York and watching what he sees as his numbingly dull and conventional daughter making the mistake of her life in her choice of husband.

The fight between these two delicious characters makes this one of James' funniest and most enjoyable of novels, with the suspense carried right up until the last moment as to how the contest will end.

What listeners say about Washington Square

I've never been a big fan of Henry James. But when I read (while browsing on Wikipedia!) that "Washington Square" is a James novel for people who don't like James - and saw that it was narrated by Jennifer Ehle, an exceptional actress - I figured OK, why not?

I'm pleased to report that I now know how to pronounce Ehle's name, and from an unimpeachable source: her own voice, introducing the recording. For the record, it rhymes with Feely.

But despite her lively and charming narration, I really didn't connect with the story or the characters. James seems to go out of his way to make his characters unappealing and the story slow and predictable. His heroine, Caroline, is repeatedly described as unattractive and dull; and her father seems to think that letting her twist in the wind (regarding her marriage plans) is an amusing game. The narrative zooms in and out like an accordion, lingering over lovers' meetings and then racing through a year or two - or in one case a decade - with a few paragraphs of the dullest exposition: and then crashes to an abrupt end.

So my conclusion is: Jennifer Ehle is a gem, and Henry James remains (for me) a pill.

Her interpretation added so much to the quality of the experience. One of those rare audio versions that’s even better than reading the words on paper. A wonderful version!

ms. ehle is a brilliant reader and actress and the story is a great one.

I am a film fan and have been drawn to books that have turned into great movies. In this case , 'The Heiress', with Olivia de Haviland, Montgomery Clift, Ralph Richardson, and Miriam Hopkins. 'Washington Square' is excellent--- a chilling story that may be painful to anyone who suffered a domineering parent. Jennifer Ehlw's reading is understated, which is appropriate to Henry James' tone. It's fascinating to see how William Wyler changed plot elements to make it work as a film.

Expressive reading of a sad story

I had wanted to read Washington Square for years, and in idly looking at audiobooks I found there was a narration available by Jennifer Ehle, best known as Elizabeth Bennet in the 1995 Pride and Prejudice. I'm an Austen fan and Ehle as narrator, in addition to this being touted as "Henry James for those who don't like Henry James" and the most Austen-like of his novels, sold me on listening. Ehle reads a little more quickly than other readers I've heard, but I got used to her pace fast, and what really sells me on her reading is how expressive she is. The later scenes, several of which depict Catherine in misery, are emotionally read. And Ehle's voice for spinster aunt Mrs. Penniman is perfectly delightful. As long as the listener can keep pace with Ehle's slightly quicker reading or doesn't mind slowing the speed manually, I would definitely recommend this title, even to those on the fence about liking Henry James' work.

Would you listen to Washington Square again? Why?

No, I wouldn't. The dynamic between the characters is clear and I didn't find subtleties in the plot or the characters to draw me back. And the narrator, Jennifer Ehle, was tremendously disappointing. She spoke as if she had never heard English spoken. It was almost as if she had never heard a human language spoken. The inflections were mannered and odd words emphasized. I loved her performance in Pride and Prejudice, so I hoped for an enjoyable listen, but instead it was simply painful.

The performance great ....story not so

Read this to get a sense of Henry James work. While interesting in style and representation of a class of American now gone?
The performance made the story more interesting and tolerable.