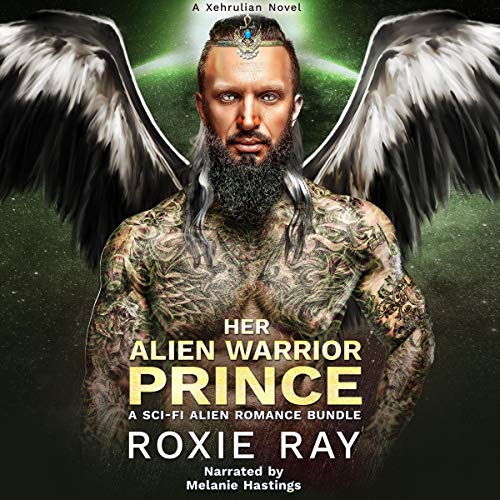 Her scent tells me she's my mate. Her blood calls to me....

Carly is everything a Valkredian leader needs: stubborn, outspoken, and her body is temptation incarnate. She’s meant to be sold off at auction, but I’ll allow no one else to touch her. Her scent tells me she’s my mate, and her blood calls to me. But a Valkredian prince must always be in control and giving in to her pulsing veins will cost more than my sanity.

I will protect the mate I’ve claimed and the people I rule. If a traitor wants to try me, I will bring down all of my wrath to make them pay.

I never expected to wake up on a space station with a red collar around my throat. But when Akzun claims me for himself, I know I’m in a whole other kind of trouble. He’s as strong as they come - a leader of his people and a man who makes me yearn. He wants my body and my blood, and I don’t know how I’m supposed to resist. I don’t know if I want to.

But when treachery on his planet puts us at risk, we’ll need to work together to stop a war. And the longer I’m at his side and in his bed, the clearer it becomes that I was made for him.

I don’t know how to be the mate of an alien vampire, but I’m going to have to learn if I want to see another sunset.

Get Her Alien Warrior Prince plus two more fantastic books in the Warriors of Valkred sci-fi romance bundle!

What listeners say about Warriors of Valkred

Long Set but so worth it

I loved how easy it flowed from one to the other. The 3 stories mixed like it was one endless book. The Narrator did a great job and was easy to listen to. Roxie Ray is great at the Alien Series!!!! #AudioBookObsession #PinkFlamingoProductions

book 1 Against the odds Carly survives obstacles and death to find a mate and love. I liked seeing the relationship between Carly and Aksun develope and the couple bonding. The drama and dissension from within was troublesome. Where was Aksun's head??? I feared for Carly. One fire put out and another started.
book 2. Zark knew was he wanted when he saw it, but Miranda wasn't on board at the beginning. Truths and secrets come to light and evil is able to escape again. My soul is tortured and I need a positive conclusion!!!
book 3 Great characters and world building with a satisfying conclusion to the series. The final showdown was glorious and exciting. I enjoyed Judy's tenacity and strength. I voluntarily listened to a free copy of this and am giving an honest review. The narrator did a great job bringing it to life.

This is a boxset of the three books in the Warriors of Valkred series.
Book one: Her Alien Warrior Prince
This is the series starter, with the blood prince meeting his human mate, Carly. Carly was abducted by aliens then bought by a demanding vampire like alien shortly after. She’s still confused as she is trying to figure out her new life. Akzun is trying to gain peace among his people while fighting his own bloodlust and then he finds his mate in middle of all that. This book is full of action, and can be confusing at times. I feel like once you get past this first book the second and third make up for the weak areas.
Book two: Stolen by the Cursed Alien
Zark is Akzun’s brother and would do anything for him including keeping secrets and going after the traitor in their midst. He also did not expect to find his mate among the human slaves. Following his brother’s footsteps he takes Miranda in much the same fashion Akzun took Carly. This book has some comedy relief in it. Some parts had me laughing out loud! I would say this to be my favorite book of the three.
Book three: The Warrior Bride
Judy was saved by Dhimur when she was but a teenager and taken to a planet and given to two very loving parents. Now tragedy has struck her people and Dhimur is once again back in her life. When Judy comes back into Dhimur’s life he knows for certain that she is his mate and he will do anything for her. He is tasked with bringing the traitor to justice once and for all, but how can he do that when his stubborn mate insists that she must join in on the fight. There is lots of passion between this couple and I do enjoy how their story unfolds. The ending is very special indeed.
In my opinion the narrator did a good job with the male roles but the female voices were a bit on the high pitched side for me. Overall this series is a good PNR.
🎧AudiobookObsessionReviewer

Book 1: I liked the main characters in the beginning but as the story went along I had trouble liking either. I truly enjoy Roxie's stories and the narrator did a great job but I just had a hard time with the characters attitudes. The plot was interesting though!
Book 2: This story had much more enjoyable characters than book 1. Loved the action and romance. This story was more developed and engaging. Excellent narration as well.
Book 3: My favorite of all three! The heroine is fantastic and so strong. Fell in love with her character and how she views everything. Love how she opens herself to the hero. Excellent chemistry. Brilliant story and narrator!
AudiobookObsessionReviewer

I went into this book with no expectations. I am not a huge fan of alien romance, but Roxie Ray did a great job. I listened to all of the books and they kept me engaged with the characters. It was written well, and I enjoyed the dialogue. The narration was pretty good.