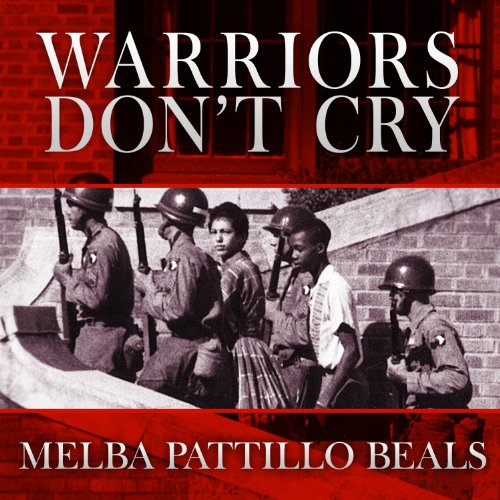 The landmark 1954 Supreme Court ruling, Brown v. Board of Education, brought the promise of integration to Little Rock, Arkansas, but it was hard-won for the nine Black teenagers chosen to integrate Central High School in 1957. They ran a gauntlet flanked by a rampaging mob and a heavily armed Arkansas National Guard-opposition so intense that soldiers from the elite 101st Airborne Division were called in to restore order. For Melba Beals and her eight friends those steps marked their transformation into reluctant warriors - on a battlefield that helped shape the civil rights movement.

Warriors Don't Cry, drawn from Melba Beals's personal diaries, is a riveting true account of her junior year at Central High-one filled with telephone threats, brigades of attacking mothers, rogue police, fireball and acid-throwing attacks, economic blackmail, and, finally, a price upon Melba's head. With the help of her English-teacher mother; her eight fellow warriors; and her gun-toting, Bible-and-Shakespeare-loving grandmother, Melba survived. And, incredibly, from a year that would hold no sweet-sixteen parties or school plays, Melba Beals emerged with indestructible faith, courage, strength, and hope.

there was a good difference between characters. you could tell who was who by the voices. overall very good book i highly recommend it.

This book was required for summer reading for my daughter. I'm so glad I got the chance to listen through audible. My daughter and I talked about courage and the importance of developing that quality. Melba and the other eight certainly displayed that quality!

Proud of My Race? Well, Proud of Shared Humanity!

Based on her diaries and on her English teacher mother's copious notes and newspaper clippings, this memoir comes on challenging, hard-hitting, and with a human warmth that you just hunger for. Melba is the perfect personification for the huge challenge of Central High's integration--not that the other individuals aren't worthwhile, but there's just such a strength within her innocence, such love and gentleness within her steely resilience, it's just overwhelming at times. She was a young girl; she was a soldier. And she always questioned segregation and second-class citizenship: Why isn't ever our turn? She was perfect for the challenges she later faced (challenges that would've, quite honestly, broken me).
Right away, from the time the law has changed, Melba is thrust into the world of adults with big ideas--those that further grand designs, and those that further threats of violence. And right away, the violence, at least turns real.
This memoir is chock full of the politics, the violence of the time, but it's also full of the freshness of the heart, of a girl who just wants to be her age and go to a pajama party (but who isn't invited due to fears it might be targeted for violence if she went), of a girl whose grandmother hammers in a painting and she frantically wakes up, dreaming that she's been shot.
And you know, it's bad enough the violence children inflict up each other, but it's drop-dead horrific the twisted hatred adults will bear towards the innocent. This memoir has anger, blood, and fire. But it has friendship, loyalty, and faith too.
Most of all, it has Melba--somebody so profoundly human, yet so courageous it's astounding.
And by the way? The performance of Lisa Renee Pitts is extraordinary! She captures hope, hatred, conveys suspense, dread, and love. Really, this is a great, great book. Well worth your credit, and to say it's worth your time? Hell, it'll change the way you look at life...

A poignant memoir - a MUST READ for all!

Would you consider the audio edition of Warriors Don't Cry to be better than the print version?

Yes, the narrator made the book come to life!

Have you listened to any of Lisa Reneé Pitts’s other performances before? How does this one compare?

This is my first listen to her performance - very very GOOD!

Yes! I nearly did...in two days I was finished and wanted to hear more!

As a young student of Denver Public Schools in the 1970's, I was never taught about the Little Rock 9 or any other Civil Rights movement. I was not made aware of any of it until 6 years ago when my then middle school son went on a school trip to Little Rock to visit Central High schoool. I was shocked and appalled and ashamed that my public education skipped over the heroic efforts that these amazing young students made in order to find the equality they deserved.

Melba's account of her horrifying experiences as a pioneer black woman integrating an all white school are sobering and heart-breaking. She sacrificed her entire high school experience on behalf of her own race. No prom, no sporting events, no school plays, rarely going into public for fear of literally being killed. I am so grateful for her courage to overcome the torture she faced every single day at school, just wanting to have the same education afforded to the white people. It makes me ill to think that anyone could do the horrible things these young white students did to the the Little Rock 9. Further, their parents taught them to be the demons they were.

I pray that our children will continue to push for equality and make this nation a better place to live. We are all one...ALL ONE!

This Warrior made me cry!

What did you love best about Warriors Don't Cry?

I've heard the story of the Little Rock Nine, but this tells of the real story.

What does Lisa Reneé Pitts bring to the story that you wouldn’t experience if you just read the book?

She reads story very well, but when reading the part of her Grandmother dhe brings her alive.

Yes , I was anxious to return to it everyday.

Not the same as my book. All. The chapters were different and it was hard for me to read

Amazing story of how this young woman pushed through despite overwhelming odds!! Very highly recommend!

I found a new hero in this book in Melba. What she and the rest of the students endured is just short of madness. The story at times remind me of Stephen King horror stories with what they dealt with in the Halls of Central high school. So thankful that Melba lived through this and shared her story.

One of the best narrated books I've heard...by far! Do yourself a favor and get this book! Such an incredible book! I am thankful to have been blessed by the characters and their bravery!

I'm definitely not a warrior since I cried a couple of times; and I'm not the type to cry easily. That should tell you how good is this book.