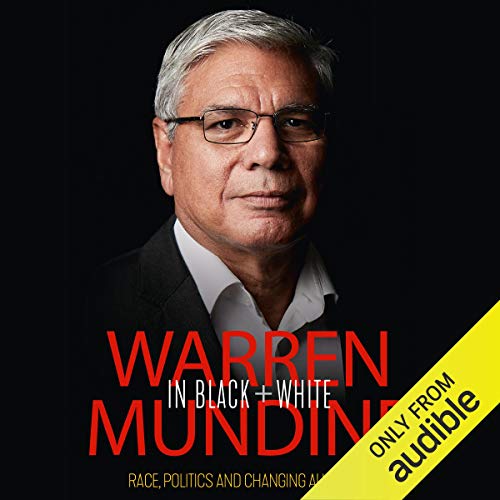 Warren Mundine in Black and White

The highly anticipated and revealing memoir from one of Australia's most significant indigenous leaders.

Warren's raw, intimate success story shines a bright and inspiring light, showing there is no limit to what you can achieve. His curriculum vitae runs into pages of honours, appointments and awards. So it's extraordinary to consider that, as an Aboriginal boy in the 1950s, he was a second-class citizen, born into a world of segregation and discrimination that few Australians today are truly aware of.

From the poverty of a family living in a tent beside a river, to the depths of depression and an attempted suicide, to the heights of political power as National President of the Australian Labor Party and advisor to five prime ministers, both Labor and Liberal, this is a stirring story of an indigenous family woven into the very fabric of Australia and its politics.

Arguably the most controversial and influential of all Aboriginal leaders, Warren challenges conventional wisdom. One of 11 children in a poor Catholic family, Warren has been on a remarkable journey, from his early life in country NSW, with only one pair of shoes and a single bed shared with three of his brothers, to today, where he frequents the highest echelons of power and business. Once an outsider, now an insider, Warren is regarded by many as one of Australia's national treasures.

Warren is one of the most significant and engaging personalities in today's political spectrum. He offers an insider's perspective on behind-the-scenes betrayals during his time as advisor to five prime ministers, with startling reveals, exclusive insights and a controversial take on the differences between Liberal and Labor.

His memoir, an optimistic and inspirational tale, speaks to a changing Australia, answering a big question on everyone's minds: what's next? Warren Mundine in Black and White is the book that makes you proud to be Australian.

What listeners say about Warren Mundine in Black and White

I really enjoyed this book. Nyunggai has had a very interesting life. His family are interesting.

A great book by a great Australian, which should be read by EVERY Australian no matter what age, colour or ethnic background!! Want to meet this man so much after reading his story!! Watch him whenever he appears on SKY television and have nothing but great admiration for him. Please do yourself a favour and read this book....

The greatest 'modern Australian political history' must-read...Dastyari, Gillard, Rudd, Howard, Abbott, racism and the challenges to economic development for Australian Aboriginal people - for a deeper understanding of the shaping of the past 200 years of Australian history.

Warren Mundine has had a profound impact on the lives of both Indigenous and European Australians. Often, to his personal detriment, this man has agitated and shocked those representing established points of view concerning how Indigenous Australians should be considered in this country. As a white Australian growing up in the Central West and New England regions of N.S.W. I have always warmed to the humour and straight-forwardness of my Aboriginal friends, but also sharing their frustration, often anger, at the way that our society has treated them. They deserve nothing less than an equal go and to our shame, Australia has not treated these equals with fairness, nor offered traditional Aussies the opportunities and encouragement that they are entitled to. Thank you Warren Mundine for your story, we all need to hear it!

New appreciation oldest culture and it's people. And the place we are today in modern Australia.