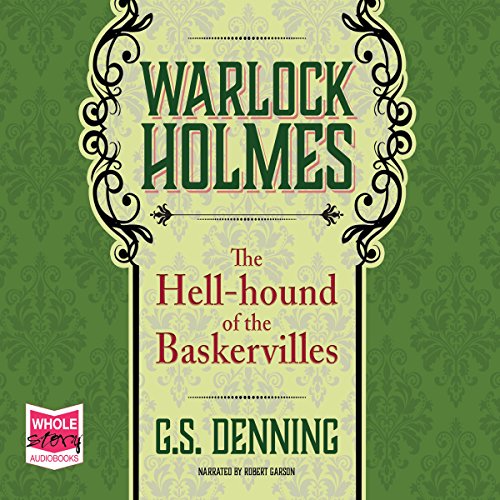 Warlock Holmes: The Hell-Hound of the Baskervilles

The only thing he has really got going for him are the might of a thousand demons and his stalwart companion. Thankfully, Dr. Watson is always there to aid him through the treacherous shoals of Victorian propriety and save him from a gruesome death every now and again.

"A must for all those who like their Holmes on the wilder side." (George Mann, author of Sherlock Holmes: The Spirit Box)
"I laughed like a loon." (James Lovegrove New York Times best-selling author of The Age of Odin)

What listeners say about Warlock Holmes: The Hell-Hound of the Baskervilles

Though I respect some of the haters who dislike this book or expect it to just be another Sherlock Homes mystery novel, the truth is that even if it wasn't a parody of Sir Arthur Doyle's work I probably would have bought it anyway.
I just wish the Author wrote more or that I could find something similar to this. It is very rare to find something that is enjoyable as this, that has a good plot, a good character selection, and can make me laugh.

gutted it's over and I don't have the next book to listen to. It's that good. amazing book.

was very funny and narrated very well! enjoyed the similarity to the original sherlock holmes

The game is a foot Whatssssa

Really fun and refreshing. Does not take itself too seriously. A rip roaring romp around Victorian London. Excellent narrator who brings the characters to life.

Sherlock Holmes will never be the same

What did you like most about Warlock Holmes: The Hell-Hound of the Baskervilles?

The geriatric Hell-Hound, the literal-minded demons, the usual shenanigans, the somewhat dim Holmes and as always; Watsons comments. And of course, the landlady.

What other book might you compare Warlock Holmes: The Hell-Hound of the Baskervilles to, and why?

Any scene with Watson annoyed. Also trying to figure out which Sherlock Holmes story is being mangled (with added demons)

If you have to, make an anime. A "normal" film can't do this justice.

And waiting for the next installment...

A great series so far!

Warlock was at it again, with good old Watson at his side keeping him (mostly) alive. I really liked getting to learn more about the making of Warlock Holmes, and his back story was superbly crafted for his character.
This is a truly excellent series so far!

Better than the original.

I have read the hound of the Baskerville's many times but this was better. Warlock Holmes is a wonderful character, complicated, compassionate and funny. All the characters are excellent, clever versions of their originals, as are the stories and the narrator is perfect.

very poor pastiche terrible narrator starts trying for a Canadian accent rapidly falls into a poor Scots one part way through a line. kept hoping it would improve sadly no. if it was meant to be funny it missed by a mile.

I tried to get through it but had to give up when Holmes snorted a walking cane from his nose. If you’re a fan of Sherlock Holmes is certainly one to avoid and ,even if you’re not, and simply a fan of fantasy fiction it’s still one to avoid. The poor narration simply added to it.

Fans of Holmes and Watson will disparage what has happened to the characters: in this author's interpretation Holmes is a whiny fool and Watson a bumbling ass who is somehow better at deduction. Cases are contrived, magic is gimmicky, but worst of all the "plot/mystery" survives only by the virtue of nearly every character being blind as a bat or as dumb as rocks. The narrator is the only real upside to this title having provided a lively, varied and articulate reading. I humbly, but strongly advise seeking listening pleasure elsewhere.

It started off quite interesting. There were several shorter stories/ mysteries at the beginning that I really enjoyed. However for the last 3 quarters of the book it was just the one story, "The Hellhound of the Baskervilles" and I found myself not caring, losing interest, drifting off. It dragged on far too long compared to the stories at the beginning.