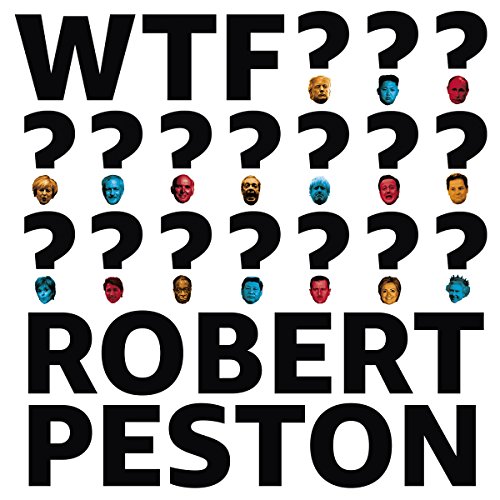 There has been a people's revolt against the way the West has been run. Brexit, Trump, the recent British and French elections saw millions of people shouting that they were sick to death of things never getting better. In WTF Robert Peston gives us his highly personal account of what those who have ruled us for years got so badly wrong and what we need to do to mend the terrible fractures in our society.

Peston wrote WTF because the election of Trump, the Corbyn surge and the vote for Brexit all challenged how he thought the world could and should be run. With characteristic passion and clarity, he looks at how and whether it is possible to make a success of leaving the EU, what the lessons should be of the appalling Grenfell Tower tragedy, whether robots can be stopped from taking our work, what can be done to staunch the widening gap between rich and poor, how to raise living standards for all and what must happen to prevent democracy being subverted by technocratic geniuses with the ability to manipulate social media.

These are the challenges of our age, because the combination of economic stagnation and a technological revolution is killing jobs, enriching the few and undermining the institutions we used to trust as the foundations of the state. What and whom can we believe when it is almost impossible to know whether posts on Facebook and Twitter are hard news or the fabrication of a Russian agent?

As in his best sellers, Who Runs Britain? and How Do We Fix This Mess?, Robert Peston draws on his years of experience as a political, economics and business journalist to show us what has gone bad and gives us a manifesto to put at least some of it right. WTF is a trenchant, often entertaining account of the recent past. It is also a call to action, giving hope to all of us who believe that taking back control is not only vital but possible.

What listeners say about WTF?

Loved it, but Robert Peston only reads the first and last chapters, so if (like me) you bought the audiobook for his unique command of the English language you may be a little disappointed.

Possibly the best non-fiction book of 2017

If you only read on non-fiction book this year, then make it this one. Elegantly and touchingly opened (and closed) as a letter to his dead father, it rolls out as a incisive look at how we, in Britain, have ended up with the mess we are in. The answers may surprise some; others may be shocked; some may deny his reasoning. Whichever side of the fence you sit, it is well written, well argued and, while self-flagellating at times, fairly strident in its conclusions and very interesting suggestions of how we might fix our broken system.

It is, though possible essential reading for anyone who is wondering: 'How did we get into this mess?'. I'd go as far as to say that any every teenager approaching their GCSEs should be made to read it - not least of all so they might not make the same mistakes when they come to vote and decide how our country is run. The section of how big money funded the very clever data-crunching to inform the use of social media in the Brexit leave campaign is with the cover rice alone. Read it and weep at mass manipulation by clever people with oodles of bits of data - it does make you stop and think about how our democracy is being eroded bit by bit.

Having not previously been a fan of Peston's broadcasting voice, I was deeply disappointed that he only narrates the opening and closing. That said, Luke Thompson does a brilliant job with the bulk of the book.

It might be seen as Peston's manifesto - and fair one it is at that. Some of the ideas for solutions in final chapter would do well to be be discussed at Govt level. I am now going to listen again to take in the bits I missed. For me, it's one of the most impactful and thought-provoking books I've read this year. I think I'm becoming a Peston fan...and I've changed my mind about his voice!

Great book written by a great journalist. Worth turning every single page 👍
Loved it.

A book every politician should read.

fantastic book, Peston dismantles brexit and demonstrates the mistakes made by this and other governments of the last 25 years.

excellent review of the current chaos

very accessible account of the current political discourse. Even if you don't agree with his assessment, he makes a compelling case.

The mess we are in

Robert Peston shows quite clearly in WTF what a mess we are in. Why people have become more nationalistic and voted for Brexit. Why there is need for a proper solution when there is a younger generation who cannot afford their own homes or pay astronomical unaffordable rents. What went wrong? A good book to listen to on Audible.

Exciting, informative, analytical, and covering all of the background to Referendum result that will lead to Brexit and much more. For me it provided a greater understanding of recent history. Read by Peston, and presented with enthusiasm and power, I found my self listening at every available moment until finished. Please please Audible, please please Robert, quickly record more of your recent books for me to enjoy!

More Disappointed Than I Expected To Be

I like Robert Peston. I find him a likeable presence on tv and he impressed me greatly with his insight into economic events of the day back when he was on the Beeb.

The surest part of this book is when he is applying his journalistic skills by critiquing what the problems are with the state, technological challenges, media manipulation and so on and offering some interesting thoughts on what actions might be appropriate to mitigate or take advantage of some of these issues and opportunities.

But a book that has at it's heart the subject of Brexit MUST discuss at some point, surely, something about the EU's role in Brexit? Surely?

Well sadly there is nothing, nada, zip about the role of the EU which is major, major omission and is the reason I knocked off a couple of stars. Brexit was at least in significant part for a lot of people a judgement about the EU, what it is, what it represents and what it might become. Nor does he acknowledge that deep concerns about the EU are prevalent across the continent, it is not merely a UK &amp;amp;quot;thing&amp;amp;quot;. Nor does he acknowledge that euroscepticism amongst a large percentage of the population has been around for decades and that Brexit is not simply about the financial crisis of 2008 and large scale immigration in the last decade and half.

He confirms at the start and in my judgement the whole thing bears out, that Robert remains a fully paid up member of the liberal metropolitan elite and given this starting point, it's perhaps no surprise that his closing rant (or passionate delivery depending on your viewpoint) endorses many of the current Labour policies. He is though to be congratulated for at least trying to look outside his bubble.

And by the way Robert, there isn't a North/South divide. There is a London/South East and everywhere else divide. Please stop lumping the south west region in with the rest of the rich &amp;amp;quot;south&amp;amp;quot; when talking about haves and have nots. Some of the lowest wages are found in the West Country yet some of the highest property prices and often the lowest government spend per capita in England and yet you seem to think it's only northern England and some parts of the Midlands that have socio-economic problems.

Most of the book is narrated by Luke Thompson and he generally does a fair job of standing in for Robert though he at times sounds oddly condescending. When Robert is narrating his text, it's unmistakably Robert so if you hate his delivery on tv, you'll hate his delivery here as well.

I like to try and follow political discourse and involve myself in these things of our lives. Reading this clarified many things, gave me deeper insights to the things I've often thought really matter and left me with a greater appreciation for why things happen and how those tasked with improving lives do what they do. A really great read! Loved how conversations with his father are threaded throughout!

I wish I could have liked this, but the author's attempt at a humorously jolly and vibrant familiarity was more than I could handle. It was painfully strained and over the top. I can't even tell you if the content was any good, and as a result I managed no more than ten minutes. After three attempts the author still hadn't toned it down and I simply gave up.