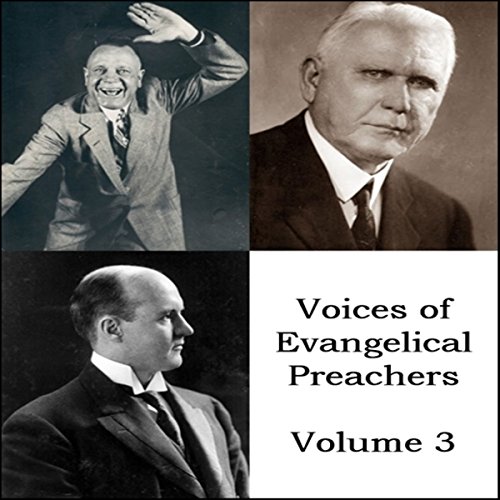 George W. Truett (May 6, 1867 - July 7, 1944) was an American clergyman who was the pastor of the First Baptist Church of Dallas, TX, from 1897 until 1944, and the president of the Southern Baptist Convention from 1927 to 1929. He became one of the most famous Southern Baptist preachers and writers of his era.

William Ashley "Billy" Sunday (November 19, 1862 - November 6, 1935) was a popular outfielder in baseball's National League from 1883 to 1890, who later became the most celebrated and influential American evangelist during the first two decades of the 20th century. Known for his colloquial sermons and frenetic delivery, Sunday held campaigns in America's largest cities and attracted the largest crowds of any evangelist before the advent of electronic sound systems. In addition, Sunday was a strong supporter of Prohibition, and his preaching likely played a role in the adoption of the 18th Amendment in 1919.

Charles McCallon Alexander (1867-1920), a native of Tennessee, studied at Maryville University and eventually became a professor of music. After attending the Moody Bible Institute from 1892 to 1894, he became a popular gospel singer who toured with RA Torry and, later, John W. Chapman to launch the "Chapman-Alexander Simultaneous Campaign".

What listeners say about Voices of Evangelical Preachers - Volume 3