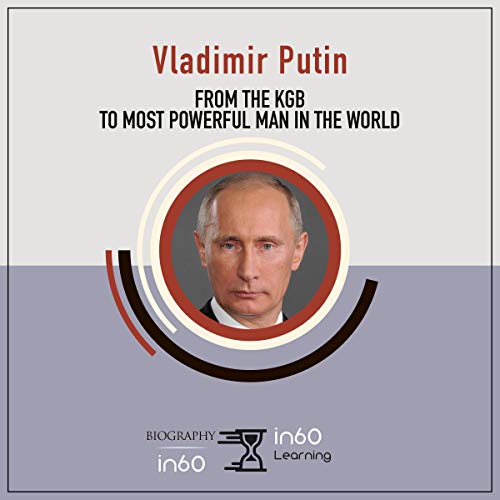 Vladimir Putin: From the KGB to Most Powerful Man in the World

Get smarter in just 60 minutes with in60Learning. Concise and elegantly narrated audiobooks help you learn the core subject matter in 20 percent of the time it takes to read a typical book. Life is short, so explore a multitude of fascinating historical, biographical, scientific, political, and financial topics in only an hour each.

Vladimir Putin is the current president of Russia, serving in his third term since 2012. He started his career as an intelligence officer and politician. Raised and educated in the Soviet Union, he saw great prosperity and growth during his first term. His leadership has been fraught with accusations and scandals, particularly in his handling of human rights and justice cases as well as his alleged involvement in the United States politics. A man who is hard to know.... Explore the life that led him to the top of the Russian ladder.

What listeners say about Vladimir Putin: From the KGB to Most Powerful Man in the World

Having studied Russian history, culture and language, and having favorably dated a native Russian, I was disappointed to find this treatment to be unabashedly biased: Pro-Russian & Putin, and anti-American/West. Was looking for a more objective and balanced perspective.