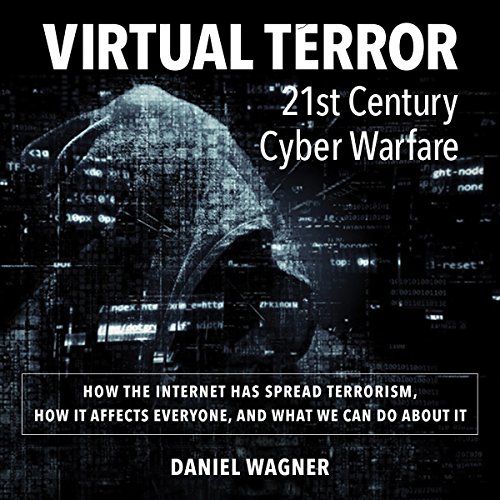 Anyone who logs on to the internet can become a victim of virtual terrorism, whether via email, social media, a Google search, or simply by logging on to a computer. Anyone seeking to do harm to others online can be a virtual terrorist, and it is incredibly easy to become one. That is the era we live in now - someone sitting behind a laptop half a world away can interfere with, invade, or take over your life, business, or government. You may not even realize it, but you may already have become a victim; if you have not, you will become one eventually.

In this extremely timely, important, and compelling audiobook, Daniel Wagner redefines what terrorism has become in the 21st century. Unlike more conventional types of terrorism, in which the perpetrator seeks recognition and reveals his or her identity, with virtual terrorism, the identity of the person, group, or government responsible for acts of terror is deliberately hidden in an anonymous, borderless, and lawless world. Their motives and objectives may be unclear, and the length of an attack, or whether it will be repeated, are generally unknown.

What virtual terrorists have in common with more traditional terrorists is the use of coercion or intimidation to achieve their objectives - if they choose to reveal what those objectives are - but that is where the commonality ends. They can strike at any time, invisibly and silently. You may never know they are even there, and they may plant malware on your computer that steals your information for years without being discovered. Wagner takes us on a comprehensive tour of the Virtual Terrorism landscape - from cybercrime and bioterrorism to drones and artificial intelligence - to reveal the chilling reality that confronts us all.

After listening to this audiobook, you may not ever want to log on to your smartphone or the internet again. The audiobook is a clarion call for individuals, businesses, and governments to rise up against virtual terrorists, for if we fail to do so now, the battle may soon be lost.

"Daniel Wagner's Virtual Terror is a thought-provoking and comprehensive look into the world of cyber threats. With national security, economic prosperity, and societal institutions reliant on information technologies in a globally-connected world, we must have our eyes wide open to the risks that accompany the benefits to being 'always connected'. Cybersecurity is a risk management issue, not just a technology problem. Daniel superbly sets the table for readers to effectively identify and assess the risk associated with today's evolving cyberthreat landscape. Virtual Terror presents you with the information you need to better manage your cyber risk." (Gregory J. Touhill, CISSP, CISM brigadier general, USAF (ret) and US chief information security officer (2016-2017))

"An inspired and fluid exposé of the emerging risks of virtual terrorism in the context of the evolving and faltering global order. Wagner underwrites his analysis with empirical data, with the potential to trigger a call to arms for policy and regulatory wings of government the world over. That Wagner makes such a dry, pithy and often geek-centered subject so palatable is a triumph of storytelling and exposition. A page turner." (Peter J. Middlebrook, CEO of Geopolicity (Dubai))