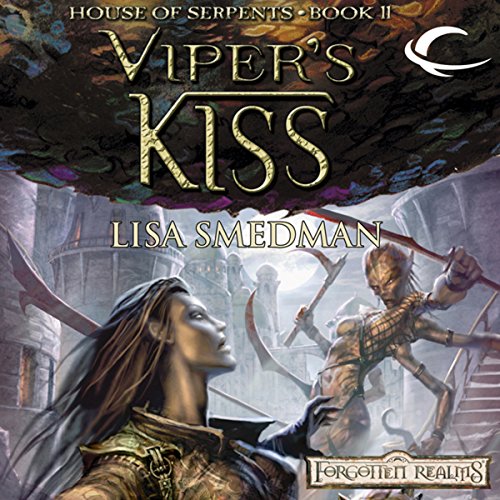 The second in a gripping trilogy from R.A. Salvatore’s War of the Spider Queen author Lisa Smedman.

Viper’s Kiss is the second title in a new trilogy exploring the political intrigues of the yuan-ti race, the details of which have been little explored in previous Forgotten Realms products. Lisa Smedman will pen the entire trilogy, which will affect many other storylines in the Forgotten Realms setting.

Formerly a magazine editor, Lisa Smedman splits her week between working as a reporter/editor at a weekly newspaper and writing fiction. She is a frequent contributor to various science fiction and fantasy magazines, and her most recent credits include authoring Extinction: R.A. Salvatore’s War of the Spider Queen, Book IV, Heirs of Prophecy, and Venom’s Taste, and contributing a short story to The Halls of Stormweather.

What listeners say about Viper's Kiss

The performance is rather annoyingly paced, cranked up to x1.25 to sound normal with strained yet monotone voices. Lisa Smedman seems to be devoted to the Forgotten Realms setting and DnD system, even incorporating the rules as physics in character, which is about the best, if not the only qualities that make the story worthwhile. The portrayal of Yuan-ti is in true fashion to 3e and 3.5 edition with morality somehow intrinsic to blood "race." There should be some ethical concerns brought about by this during the current zeitgeist of consciousness but the inclusion of cultures including Yuan-ti is good for those looking to contextualize the Faerûn lore with the details of customs, culture, and even a bit of Yuan-ti physiology 😅