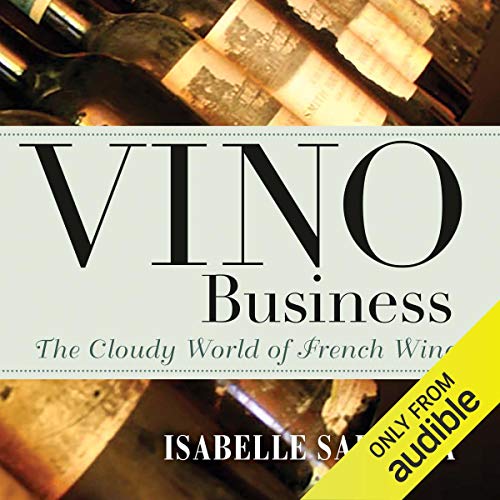 Already provoking debate and garnering significant attention in France and within the wine world, Vino Business is a surprising and eye-opening book about the dark side of French wine by acclaimed investigative journalist Isabelle Saporta.

While Bordeaux has been a bastion of winemaking tradition and excellence for centuries, in recent decades the industry has changed dramatically under the influence of large-scale international investors. French insurance companies, international fashion houses, and Chinese businessmen are all speculating on the area's wines and land, some of whose value has increased tenfold in the last decade alone. Saporta investigates in detail the 2012 classification of the wines of Saint-Émilion, the most prestigious appellation of Bordeaux's right bank, which has come into disrepute, not least because the scoring system was changed in order to give points for a châteaux's lecture facilities and the size of its parking lot.

A shocking exposé of the French wine world and a cri de coeur for the lost values of traditional winemaking, Vino Business pulls back the curtain on the secret domain of Bordeaux, a land ever more in thrall to the grapes of wealth.

What listeners say about Vino Business

If you’re into wine, in any way, this is worth a listen - but be warned, at times, it feels very much like a hatchet-job. There is, no doubt, plenty wrong with the French wine business, but this book was incredibly one sided, presenting dissenting voices without criticism or challenge. There’s definitely something to what this book is trying to say, but it feels like you only get half the story - a lot of accusations, in a frequently sarcastic tone, and no attempt to present the other side of the picture.

Interesting but sensationalist and one-sided

The book looks into the shadier sides of the French wine industry (though mainly Bordeaux), from a multitude of different angles, and by the end, it's easy to find yourself thinking twice about buying French wine ever again. I was startled to learn just how rampant and unregulated pesticide use is in French wine (which often has far greater toxin levels than would ever be allowed in food). And I was dismayed to hear how hostile the mainstream winemakers are to organic winemakers, even when their own pesticides were shown to have caused serious illnesses (including cancer) to local farmers and residents. Also eye-opening was how cynically some ultra-prestigious chateaus can allow politics to eclipse the actual wine itself (even when you'd think that the reputation of their region's wines would be among their most precious assets). Like, for example, when influential winemakers rigged the appellation scoring system to require a fancy above-ground cellar, just so that a certain competitor wouldn't qualify (because his cellar was a traditional underground one, and his land was already full to the brim of, you know, vines). Or how rampantly Bordeaux is bending to the whims of Chinese investors, many of whom are just out to make a quick buck, and not always ethically. For example, some of the Chinese companies buying up prestigious Bordeaux Chateaus are apparently doing it just to own rights the label....so that the French can't sue them when they use that label it to sell counterfeit (Argentine) wine. So I was left with a set of strong impressions from the book, but it's hard to really know how accurate this impression is, as the book is very one-sided, and makes only the barest pretence of impartiality. Most of the people who appear in the book are quickly cast as either hero or villain, and most anecdotes are clearly meant to serve the preconceived David-and-Goliath narrative, rather than offer nuance or depth. Sometimes the narrative isn't even logically cohesive, as the author tries to have her cake and eat it too. For example, in one chapter, a winemaker who endorses using oak chips so that even people who buy $5 wines can enjoy oak flavours is cast as some sort of contemptuous aristocrat set on maintaining class divide ("so, in other words, oak barrels are for the rich, while oak chips are for the rest!"). Meanwhile, in another chapter, a Bordeaux winemaker's struggle to progress from 2nd Cru level to Premier Cru level (so that he can charge prohibitively astronomical prices for his wine, instead of merely ludicrously high ones) is portrayed as a hard-done-by underdog valiantly fighting The Man. Still, if you don't go into this book expecting strong journalism, there's a lot of interesting stuff to be taken away from it, albeit with a grain of salt. The narrator is convincingly engaged in the text, and her French pronunciation is (from what I can tell) very good.

I export select premium California and Oregon pinot noir to France and have been hosting face to face wine tastings with the French in my small wine shop in Annecy, France for almost 4 years now. Most French have never tasted such good pinot noir wines and they say so.

People should know what is really going on in the wine industry and this book is just a sip of the glass.

Winemaking is the best its ever been, which has attracted avarice hedge fund types and
multinational conglomerate distributors and merchants that are buying up family owned vineyards and replacing winemakers with students with a couple years of internship. I see it happening in Santa Barbara, Monterey and Napa and Sonoma. and it’s happening in France too, after bad weather in Bourgogne forces families to sell. The result is the same, industry driven tastes with less distinctive wines.

The narrator's overdone French accent for every French word was too distracting to continue. Book returned. While I didn't make it to the end, the author used a tone that indicated a bias, rather than a more objective journalistic style.

others may greatly enjoy this book. for me it was little light as a whole. a lot of stories but not the depth you may get from other. the writing was enjoyable, I was just looking for more.

good, but a bit of a rant

a nice introduction into the changing wine cultures of France. Not for a pure beginner, but not for professional. the author makes many points that are at the heart of the complaints around the industrialization of Bordeaux, but does come across as being on a bit of a rant at times. Also, if you are not a fan of obnoxiously French pronunciations of everything, at one point even the very English name of Henry the 8th, this might be one for you to skip.

Great Exposé on the Wine Business!

This book was really well written. As a wine professional, I found it immensely engaging and thoroughly informative of the underbelly of the wine world. My only complaint is that the narrator was so ridiculous with the French pronunciations that it quickly became excessively irritating. I appreciate that she can obviously speak French, but seriously- we get it. Dial it down a notch. Other than that, great book!